For years, the Philippine International Hot Air Balloon Fiesta has been an event awaited by enthusiasts of these usually colorful and enchanting balloons powered by flames or hot fumes that makes what's supposed to be a big and heavy structure float. It is an international festival as participants come from all over the world and the first of this event was held in 1994, succeedingly has been an annual event (except 1999). Recently, it has become a popular event for locals living in Manila or those within the vicinity around Clark Air Base in Clark, Pampanga. The 15th Philippine International Hot Air Balloon Fiesta is held during the days of February 11-14, 2010.

With Jojo, who picked me up early today, around 3:30AM on the way to passing by Patrick, we targetted to be at the place by 5AM. It was a fast an uneventful drive via NLEX/SCTEX but as we approach the area, we clearly could see a number of cars obviously are also on their way to the festival. We arrived as expected and lined up for the tickets (PHP150 each) for around half an hour, lined up again for the entrance and was finally able to go in a little before 6:00AM. By that time, the whole front line of the cordoned area segregating the audience from the exhibitors. 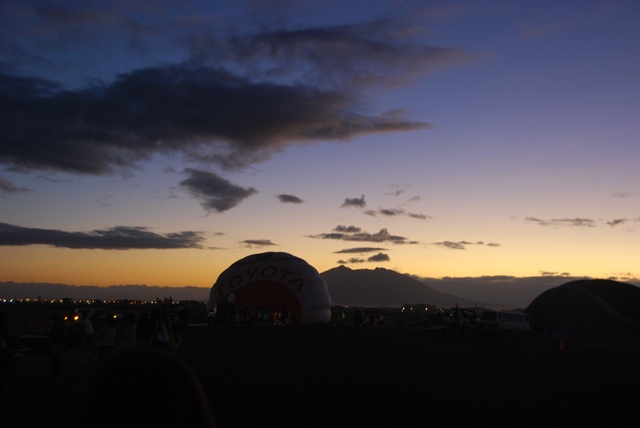 Minutes later, it was time to open the show. A skydiver appeared bearing the Philippine flag as the band struck their instruments to the tune of "Lupang Hinirang", the national anthem. 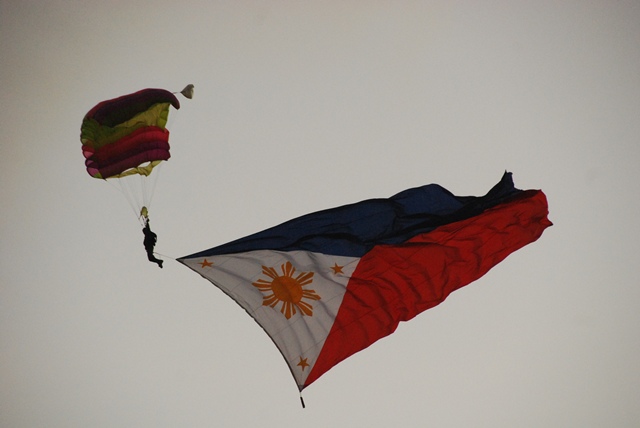 There were also a few paragliders in live exhibition. 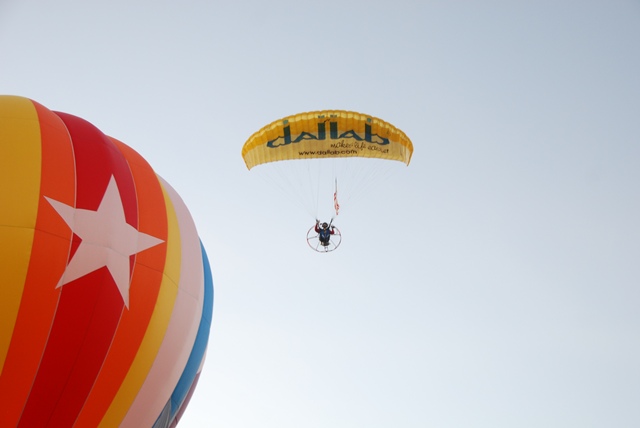 It was getting brighter and brighter as things go along. The sun was already up and we can see a few of the exhibitors are still prepping up while a number of them are already waiting for the cue. Mind that this is my first time to see hot air ballons up close (at least relatively) and these huge inflatable structures are really different being seen from the ground close and up in the air on flight. 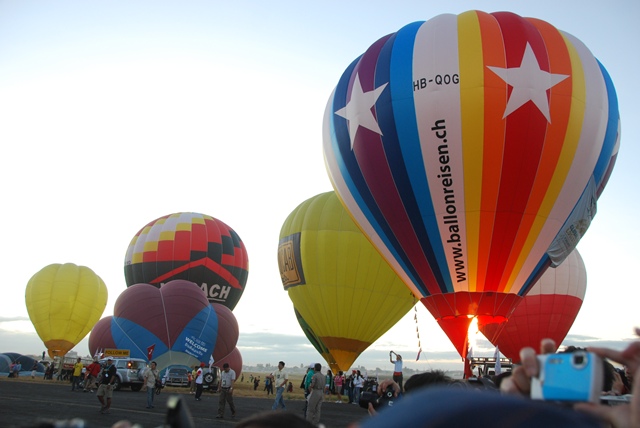 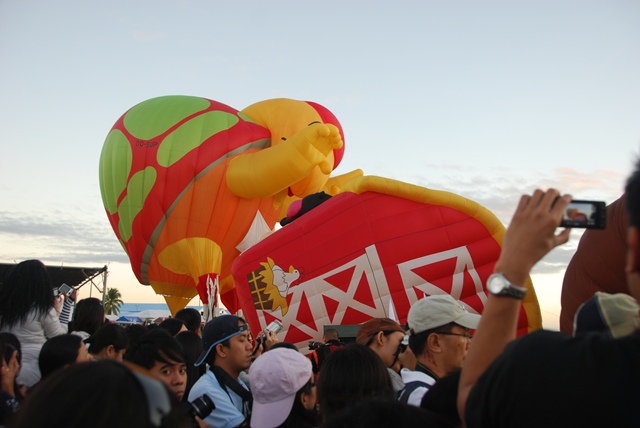 What caught my attention are these two cute looking balloons that are prepping up, one shaped as a beer bottle and one like a barnhouse with animal heads popping out of its windows. 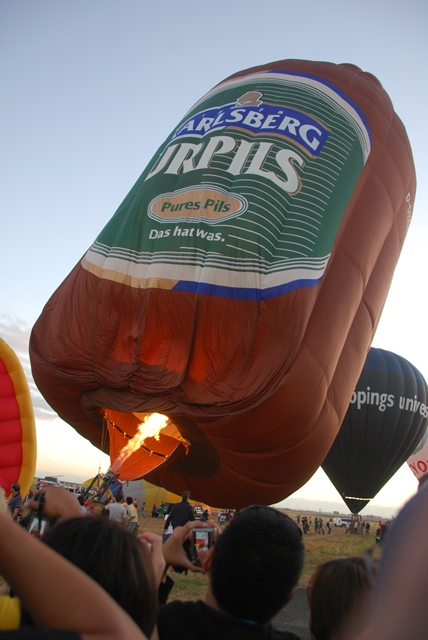 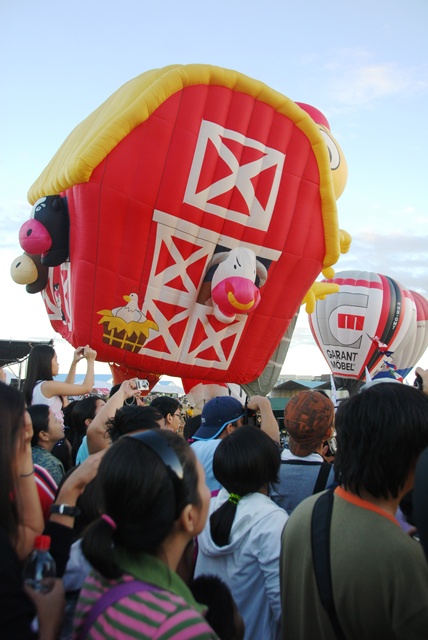 By around 6:30AM most of the balloons are already ready and some already started to take flight. 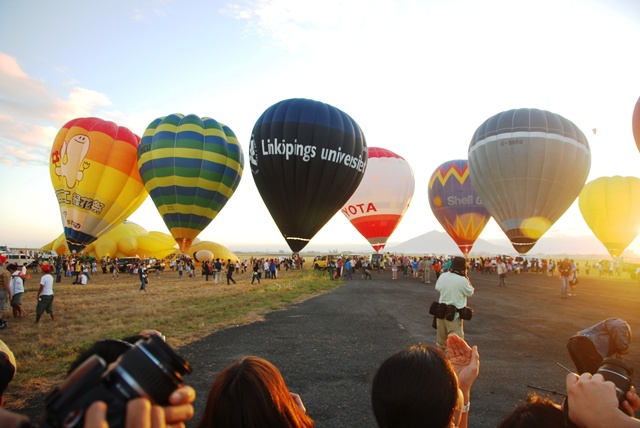 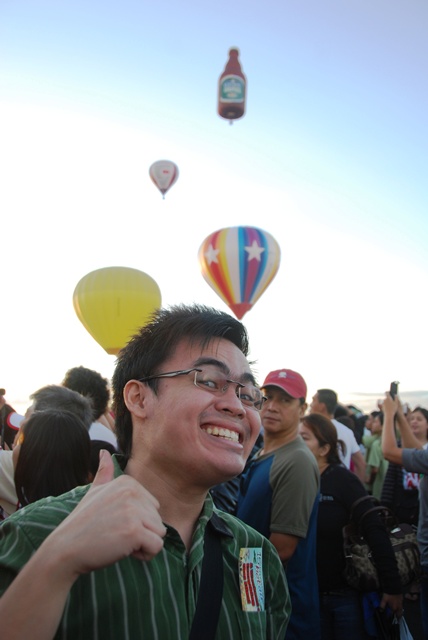 More and more balloons started to lift off just within minutes, the barnhouse as well as a turtle-shaped balloon behind it is now almost ready to go! 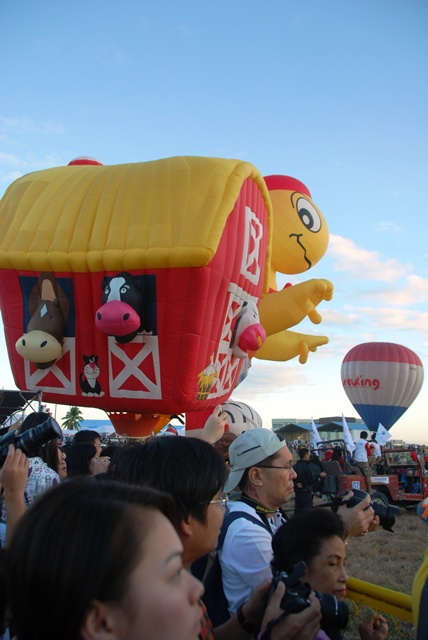 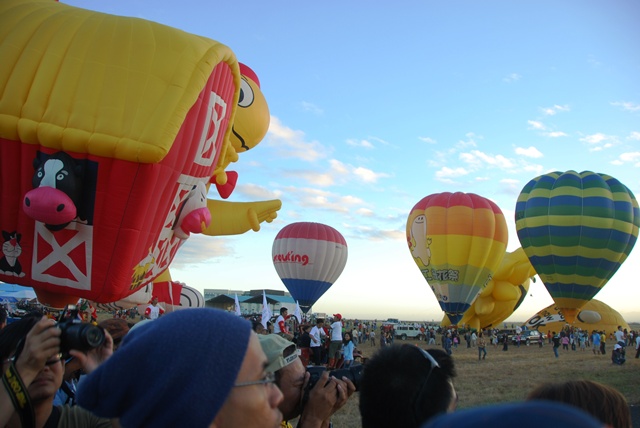 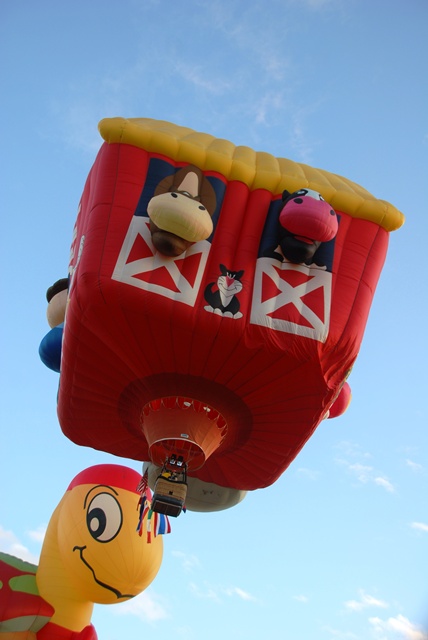 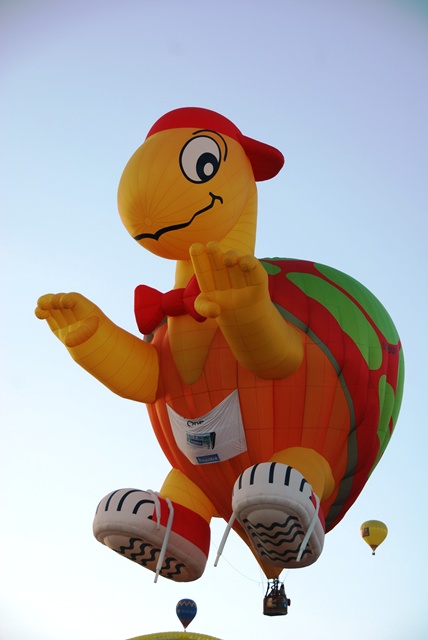 I find the turtle-shaped balloon very cute and appealing, especially to the kids and kids-at-heart. 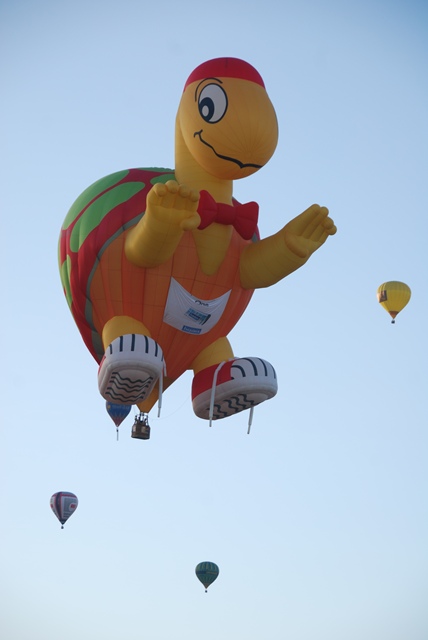 In 15 minutes, almost every balloon already lifted off! 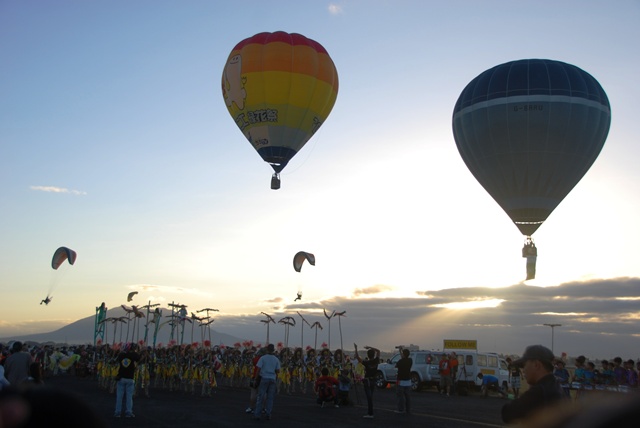 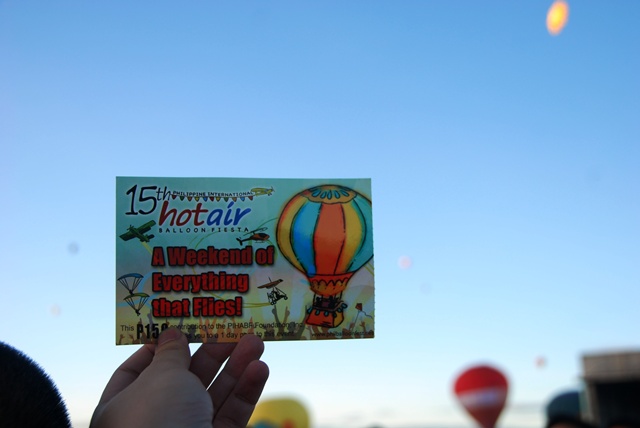 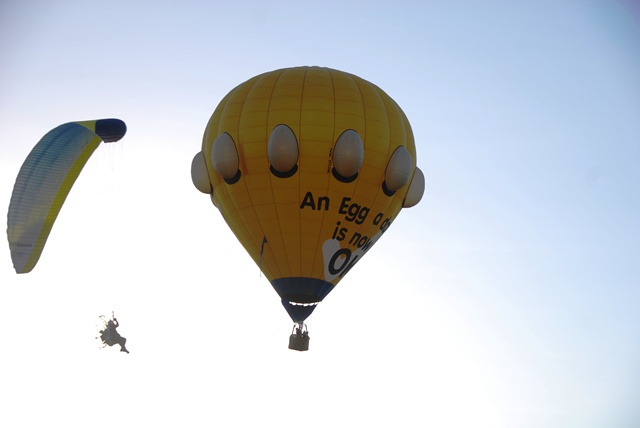 Another interesting item on the event is this sun-shaped balloon. I took this picture while it's already up in the sky, "shining". 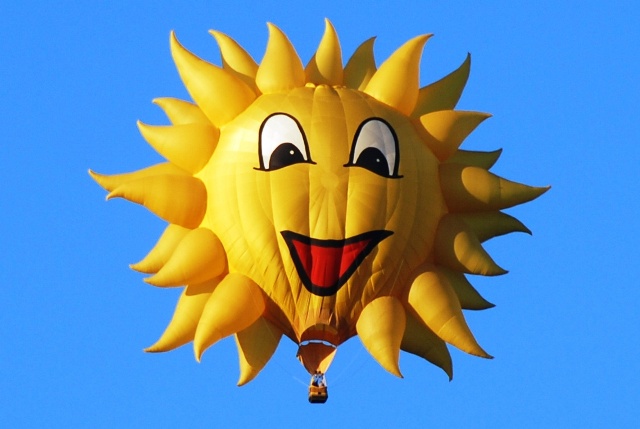 The event was well attended mostly by younger adults but both grown-ups and kids are welcome to experience the excitement as well as other activities lined up throughout the festival like radio-controlled aircraft demos, plane demo flights, and other exhibitions. 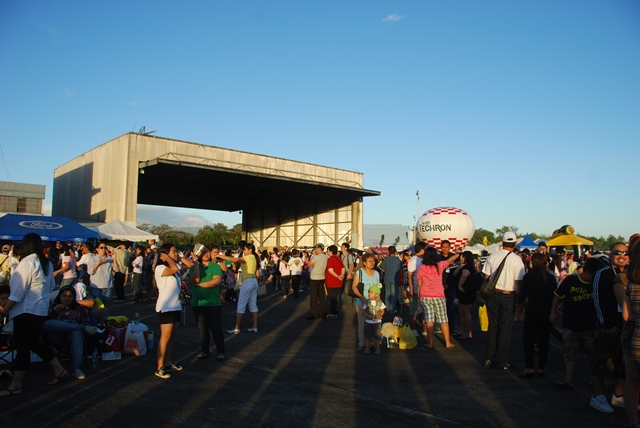 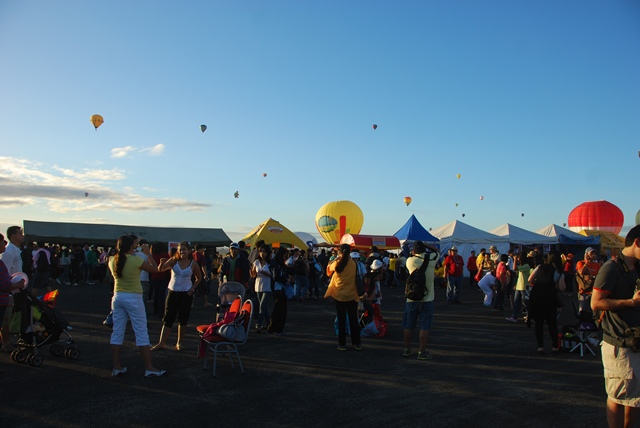 We really just came for the balloon flights and stayed just for a while to take some photos, by 7:15AM, we declared we're done for the day and headed back to Manila as I have a teaching assignment to catch and Jojo has to pack for things for his flight to US tonight.
Posted by Jasper at Saturday, February 13, 2010