It's been a while since I had flew Philippine Airlines on a regional (international) flight. The last time was last October and things have changed dramatically since then, when the airline was in a middle of a transition to outsourcing its non-core services. For my flight to Jakarta last Wednesday, at least, I am happy with the food. 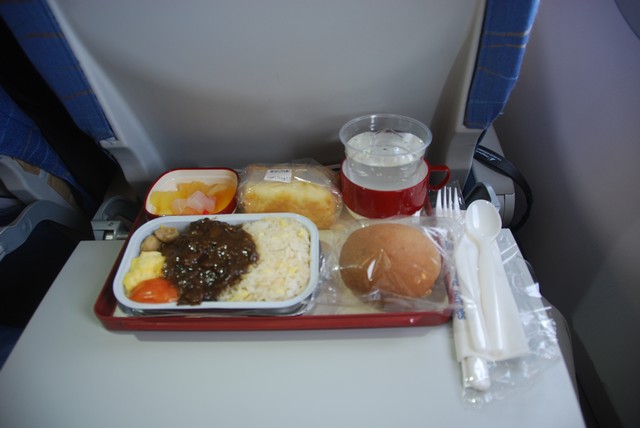 I took the morning flight to Jakarta, with a stopover in Singapore so as to avoid another redeye flight again, which I find energy draining specially if I'm doing engagement deliveries. From the airport, I took the service of Silver Bird Executive Taxi to the hotel, costing me IDR218200 for the trip. 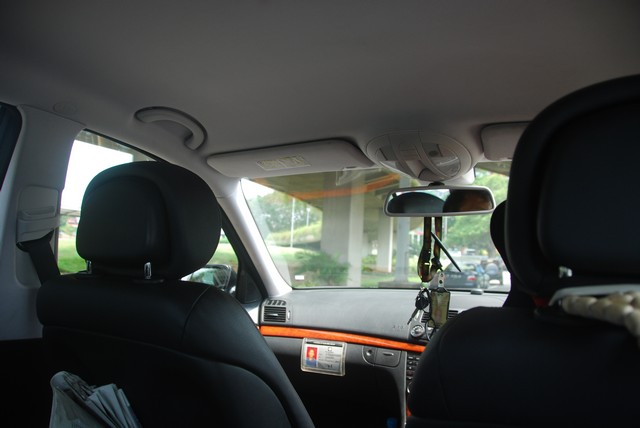 I stayed at The Mayflower Jakarta - Marriott Executive Apartments this time. The place offered serviced apartments ranging from 1 to 3 bedrooms per unit. I am booked for a Superior, 1 Bedroom Apartment, 1 King Bed at the company rate of USD132++ a night, inclusive of breakfast, internet and 2 pcs of laundry (which I didn't use). The unit is located in Indo Food Tower on its higher floors and is a unit with 80sqm of space. My apartment a separate living and dining area, as well as a small pantry area/kitchen with oven and dishwasher. There was also a ceramic cooktop but I didn't get a chance to use any of the kitchen facilities. It was weird though that they didn't provided at least a microwave oven, which would have been useful. There was even a water dispenser en-suite. 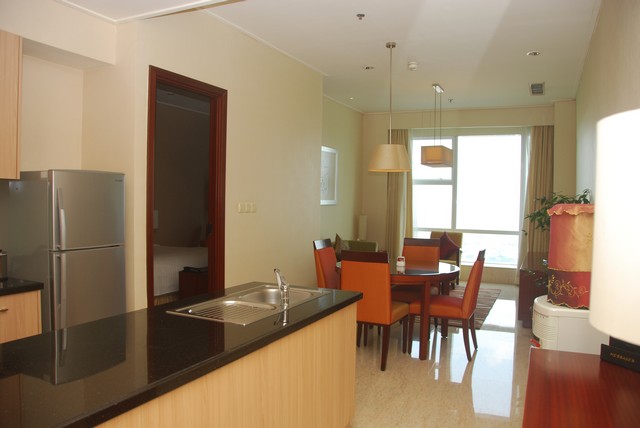 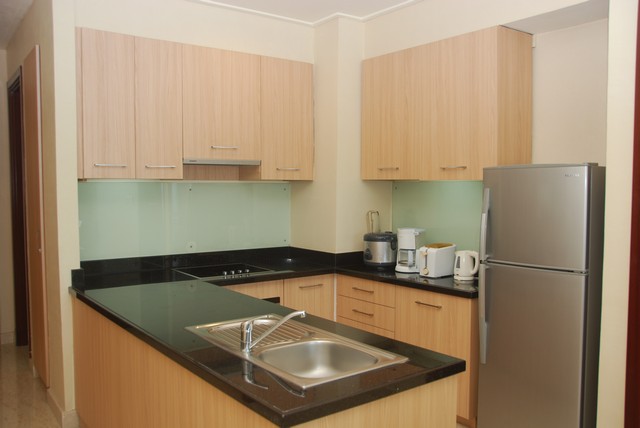 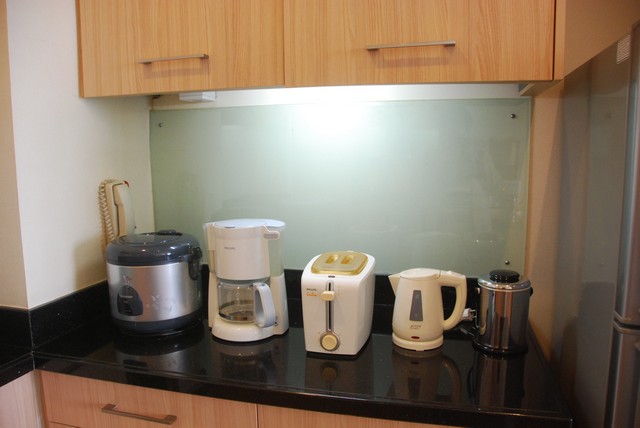 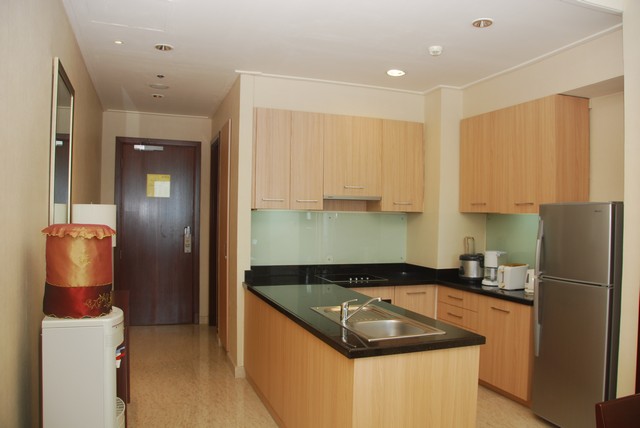 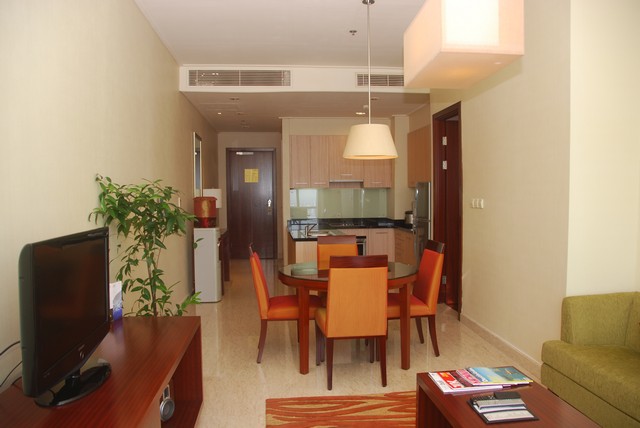 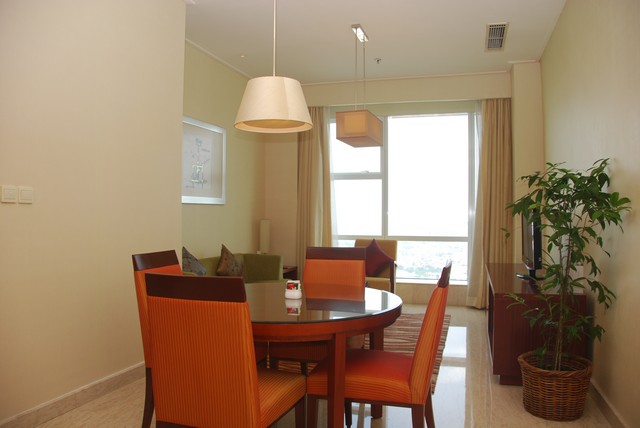 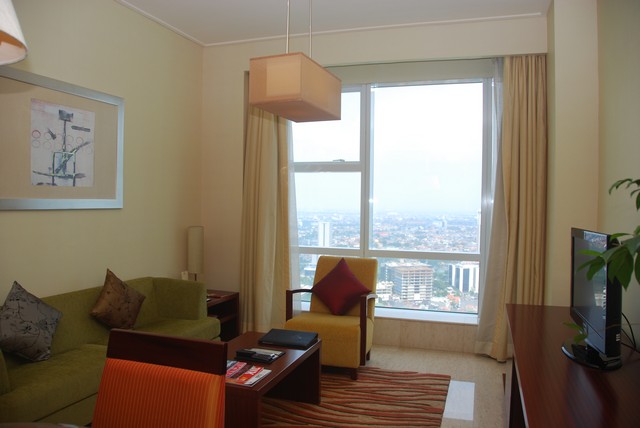 Behind the kitchen, just as I enter the apartment, is a utility room. Inside is a washing machine available for use. 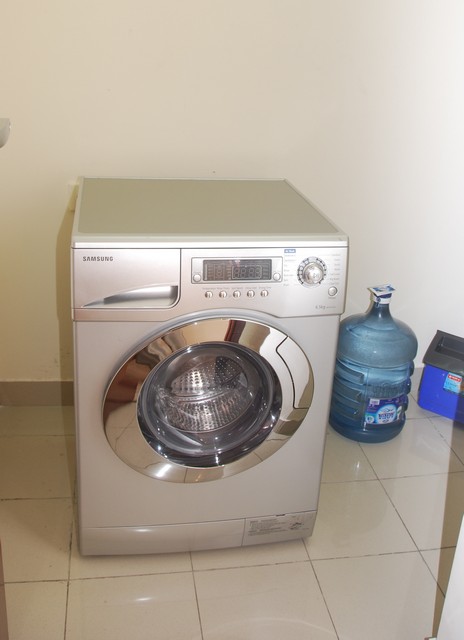 The bedroom is separated by a wall from the living room. Inside is a very comfortable king-sized bed. 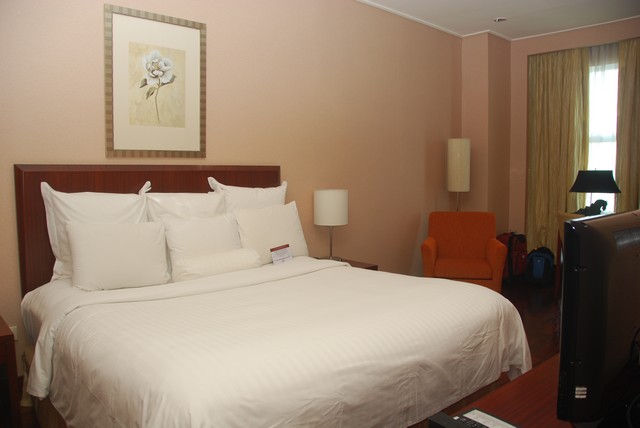 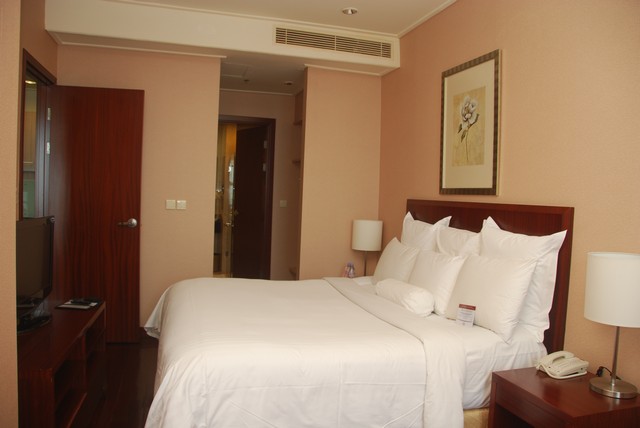 There is also a working desk at the end of the bedroom. 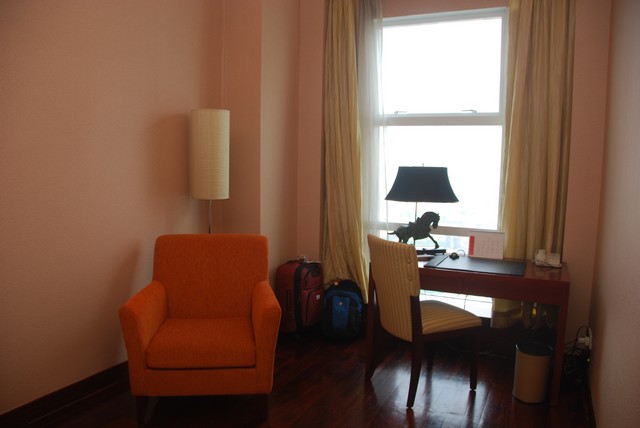 Walk-in closet space is available between the bedroom and the bathroom. 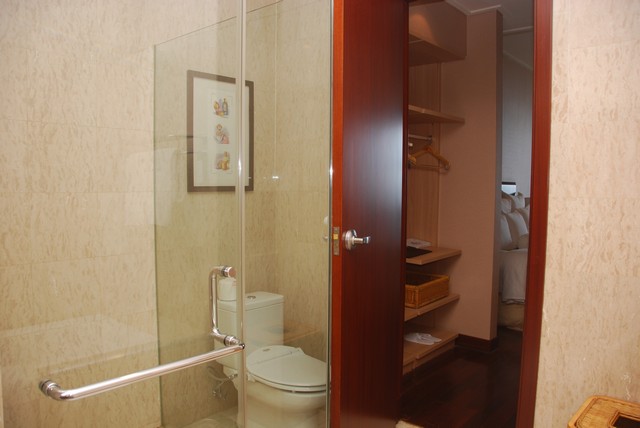 As for the bathroom, they room had a separated tub from shower which I liked as I hate climbing a slippery tub in the morning for my shower. They provided basic toiletries too like shampoo, conditioner, toothbrush, etc. 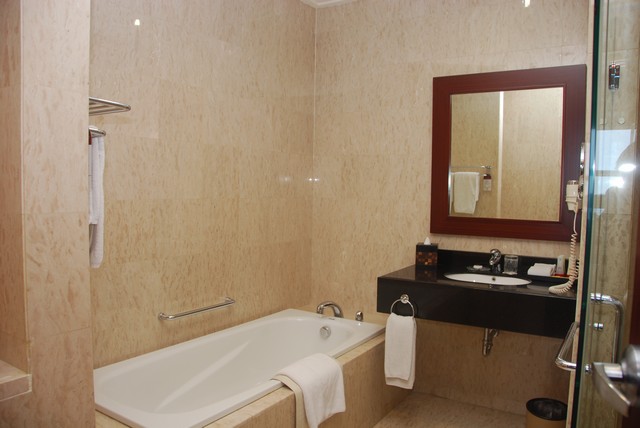 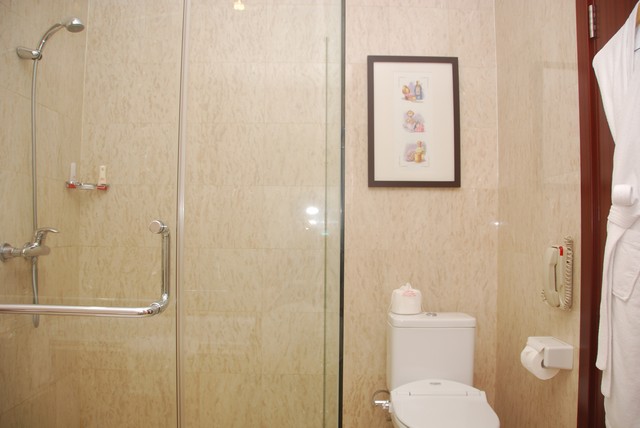 view from the room 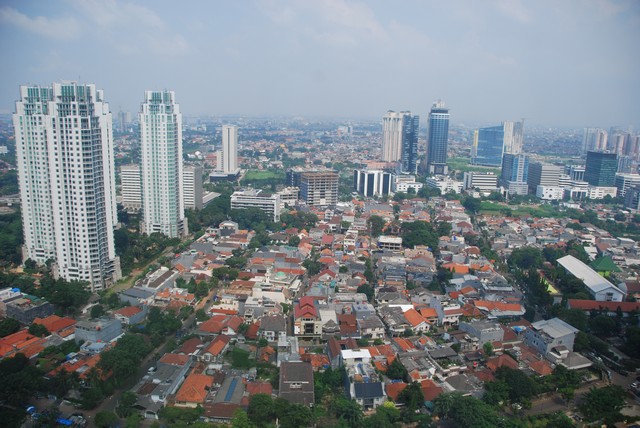 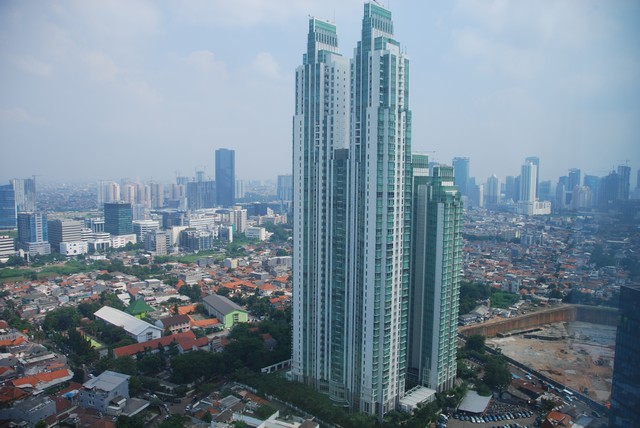 What's convenient in this apartment is that just on the ground level, there is a convenience store and a few dining places. As I was hungry at that time, I bought a box of siomai (steamed pork dimsum) and some drinks. 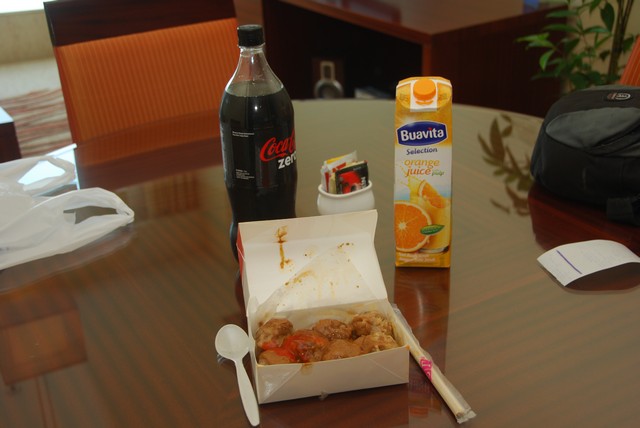 For my dinner that night, I also went to Chowking just downstairs and ordered spicy beef noodles and black gulaman. I should say the soup was indeed very spicy!! 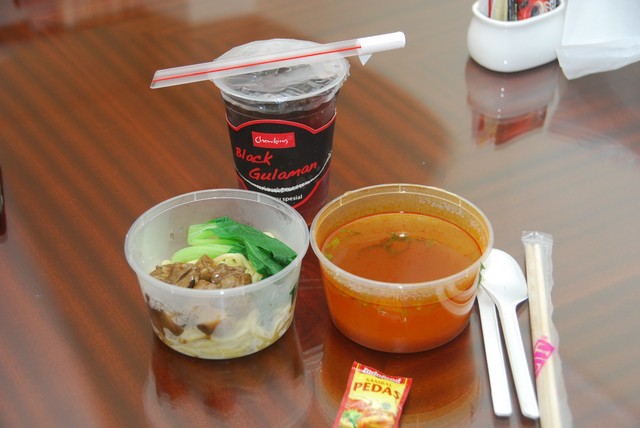 Thursday morning, before I headed too our local office, I had my buffet breakfast, served at The Café, located at the ground floor. There were around 3 or 4 hot dishes selection and a few cereals, salad station and some sweets. Definitely no the most number I had in the hotels I've been to recently, but it was just decent enough. After all, this is a serviced apartment not a 5-star hotel. 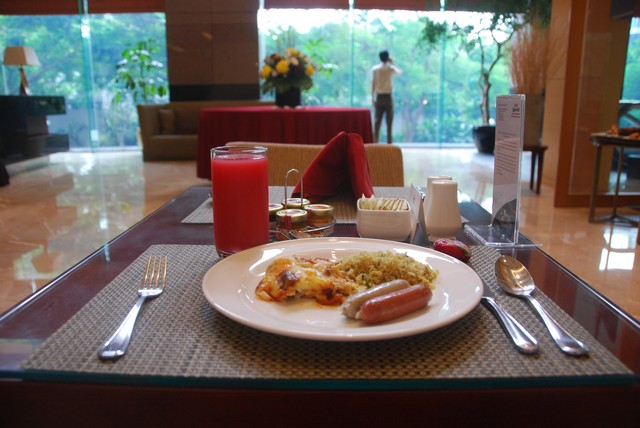 As expected, the whole of Thursday was spent in our office with me delivering the workshop. That evening though, I went to Citywalk Sudirman and had dinner at Dapoer Prana. I had sop buntut goring (fried oxtail soup) and drink (IDR66125 for both). 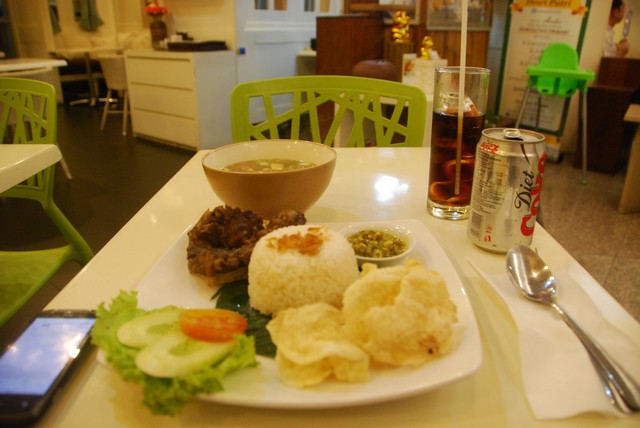 Friday (yesterday) is the last day of the workshop. Like yesterday, I went to have breakfast first before going to the office by cab. 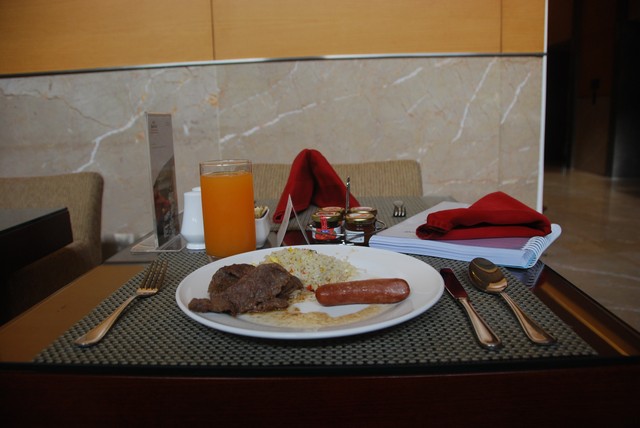 Last night, I had my dinner at Sumibian Yakiniku which is located nearby at the 25/f of Chase Plaza Tower. I didn't manage to take some pictures though as I was in a hurry to pack my things up as I am leaving for the airport that night too as I took the red-eye flight past midnight (very early morning today) so I can catch my classes this morning.

It was unfortunate however that I had a small mishap with Philippine Airlines which I blogged earlier today, but it's not a big deal and hope it doesn't happen to any of their other passengers. Now I'm back in Manila, and in between classes at the university where I'm teaching and feeling a bit sleepy.
Posted by Jasper at Saturday, February 18, 2012