Chester and I had long talked about taking a trip after all his school duties are done. Months ago we decided to pursue this and book our tickets but since we were both busy to plan for anything, most of the preparations were done the last minute. Our plan - we'll be in the city for a quick weekend of only 2 days (a little over 48 hours) and will try to squeeze in as much as we could in that timeframe. One thing in common that we agreed upon is that we'll try to stick to a budget and make the most effort to make this tour as affordable as possible, especially him, being a new graduate.

It was Friday last week when we left and it had rained in Manila for the past days. Weather forecast in Singapore says there will be rains and thunderstorms either. With our backpacks, my camera tripod and 3 cans of hot and spicy tuna (don't ask why), there's nothing much we can do but pray for a good weather and a good time and make the most out of everything we had for this sort of a backpacking trip.

Travelling via the no-frills offering of EconoLight class by Philippine Airlines means there will be no food service throughout the flight except for selected beverages. Chester booked for this class while I opted to take the lowest fare earning miles in an effort to regain my status in their Mabuhay Miles frequent flyer program. Because our flight is scheduled to leave Manila by 7:35PM and to arrive in Singapore by 11:15PM something has to be taken prior to flight. If you are a first timer in Centennial Terminal 2 of Ninoy Aquino International Airport, you will be surprised that there are not much food choices inside the terminal so we landed at Vin-Vin Kiosk as we are looking for a rice meal. 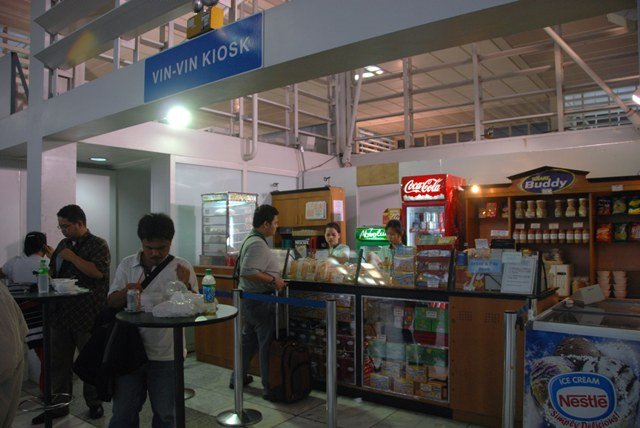 Hainan chicken, although it's more like the usual roasted chicken, previously prepared and frozen and served to us after heating in the microwave oven. It costed us PHP170 including drinks but it's understandable since airport food is really expensive. 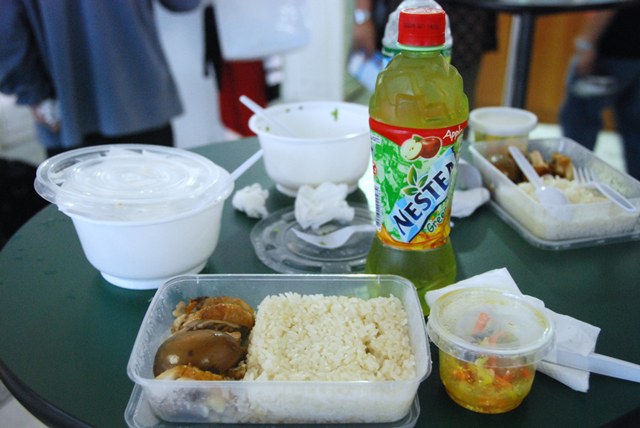 Passengers boarded our plane a little over 7:00PM and we took off for Singapore just as scheduled. 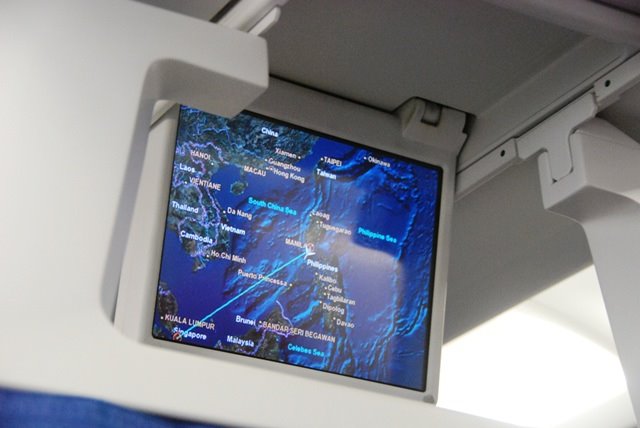 For most of the duration of the flight I tried to catch sleep. Since we are arriving late at night, we'll be needing all the rest we can get for the next day. I only woke up when dinner was served to non-econolight passengers, a choice of chicken with rice or beef with noodles. I had the former. 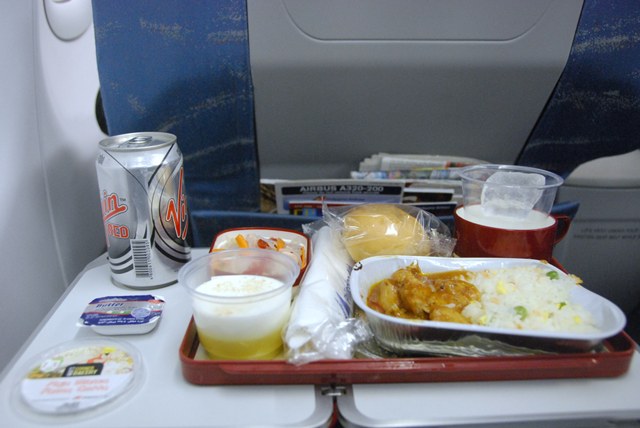 After over 3 hours of flight time, our plane touched down in Singapore Changi Airport. I wasn't able to take picture, but I saw an A380 taxiing as we approach a gate. Because I'm located at the forward section of the plane, I was able to deplane first and waited for Chester outside. Looking around Terminal 2 of Changi airport, it's amazing to see lots of shops, free internet kiosks and other things that will keep you entertained while inside waiting for your flight. 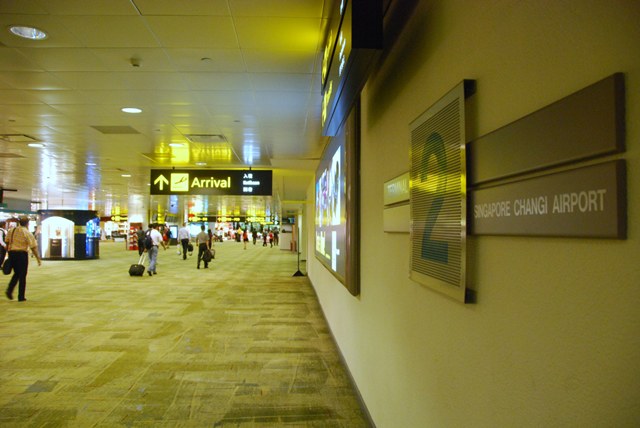 It's actually my second time to be here in Singapore. My first was in a trip with my family almost 3 years ago. 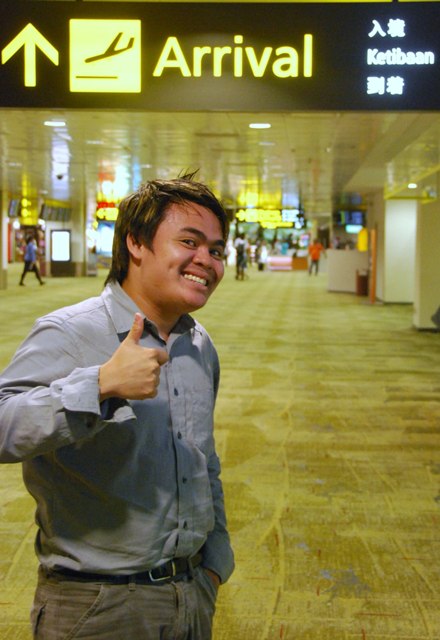 Passing through the usual process of immigration and customs, we immediately headed towards the train station. It's very helpful that the airport is connected to the commuter train and there are informational signs everywhere that makes walking through and finding your way around a breeze. 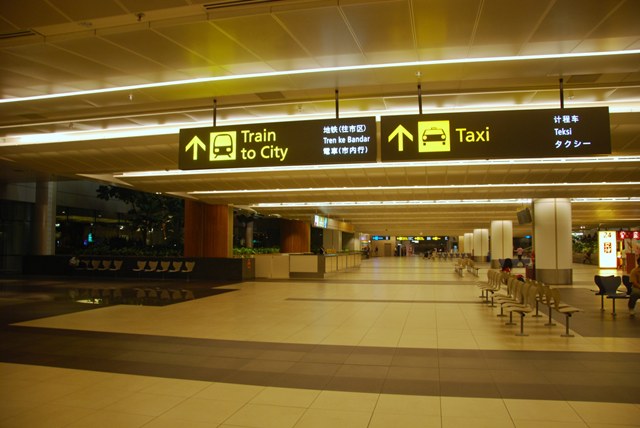 It took us a 10-minute brisk walk to get to the train station, located at the underground. 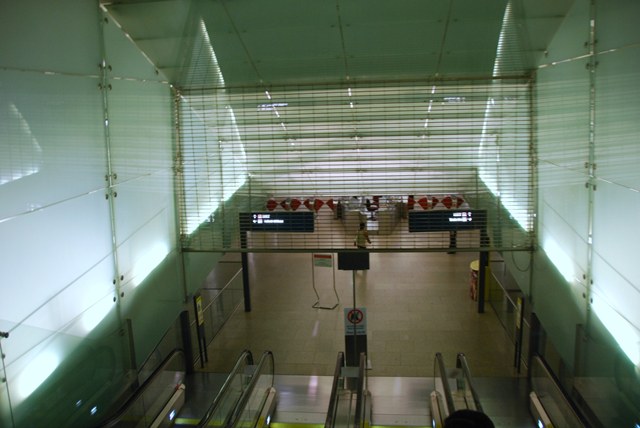 Last train to the city leaves at 11:20PM, and it was already 11:40PM by the time we got there. We were disappointed at first but we don't give up easily. Following the again the signs, we decided to take the bus instead. The bus schedule listing is detailed. However, there is no clear map, either that or we can't decipher. We just looked for a bus stop that appears to be near Bencoolen street, where the hotel we're checking in is, and saw Dhoby Gaut. 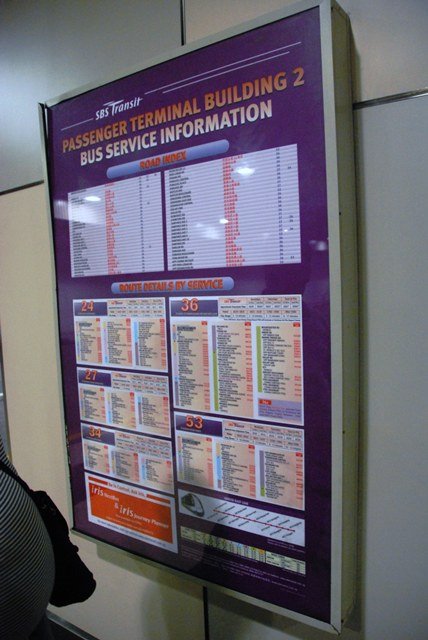 Testing our luck, knowledge and willpower, we boarded bus 36 and kept our fingers crossed. Not sure about the fare, but we paid SGD2 since the driver doesn't keep spare change. 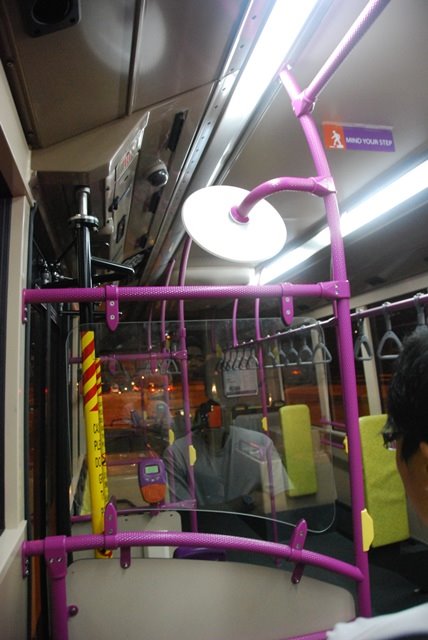 My previous memory of Dhoby Ghaut as well as a map at hand helped us a lot. Even before we reach Dhoby Gaut, we stopped the bus and alighted in near YMCA, opposite the Cathay building. Walking towards the direction of Bencoolen street, I saw this street post and thought too much information like this can be confusing also. 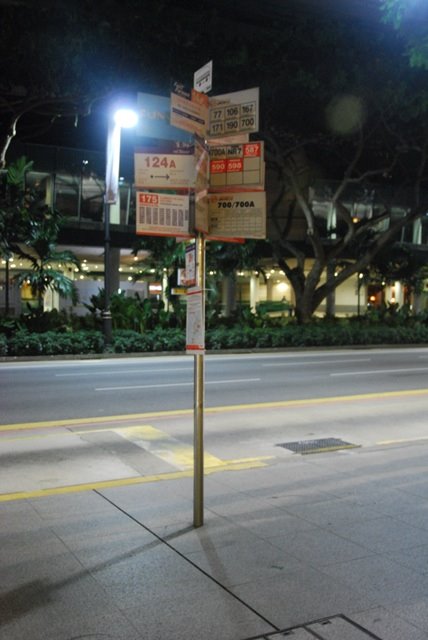 I noticed that the weather was hot the minute we stepped down from the bus. It was already past midnight and I was expecting a cooler air.

After 15-minutes of walking, by 1:00AM of early Saturday morning, we finally reached our hotel - Ibis Singapore on Bencoolen. We got a good exclusive promotional rate of SGD120++, which includes breakfast for two and complimentary internet access (online rate is around SGD128 - 148++ without breakfast), although it's not as cheap as how others got theirs when there was a promo (I read from posts and blogs that others got theirs for SGD10 or even SGD1 a night). I previously thought of staying at a hostel or other low rate accomodations but the rate we had is a bit irresistible for me for its convenience. Anyway, it's still cheaper than the usual ones and the hotel classify itself as an "economy hotel". 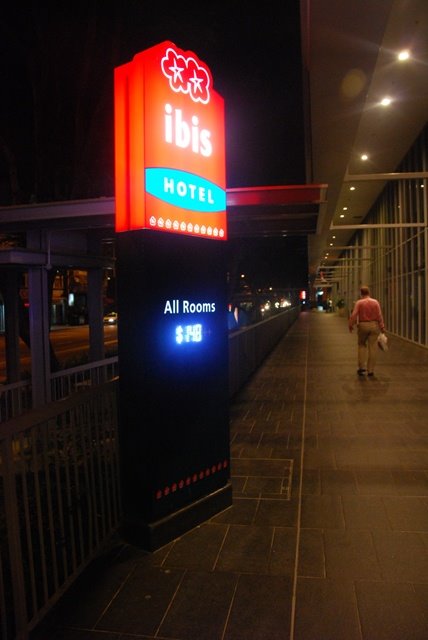 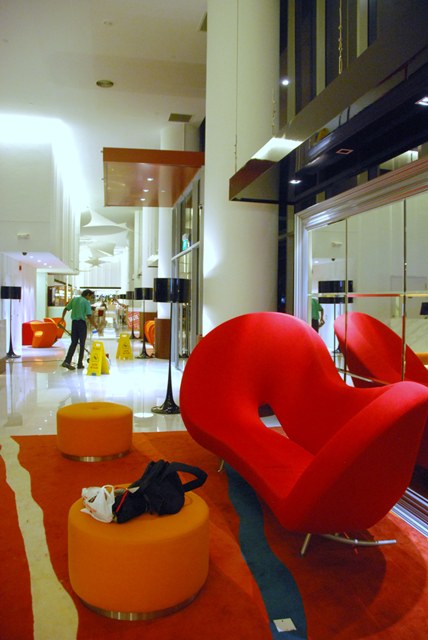 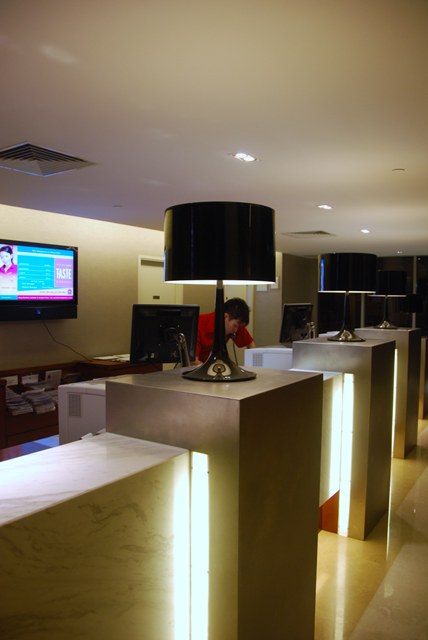 We got room 1225, at the 12th floor because of a prior request of "high floor with a nice view". Inserted the key for us to press 12 from the elevator buttons and off we went. 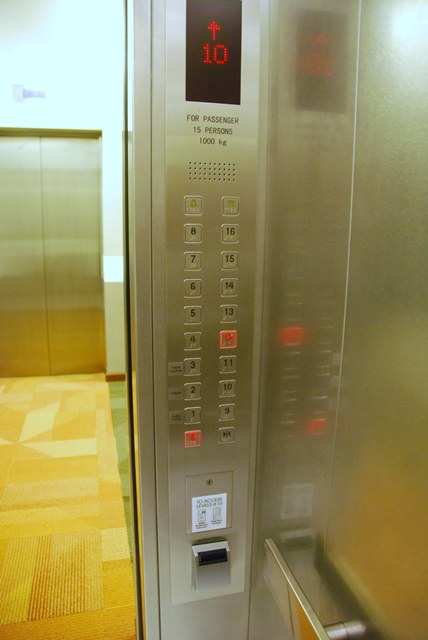 hallway to our room 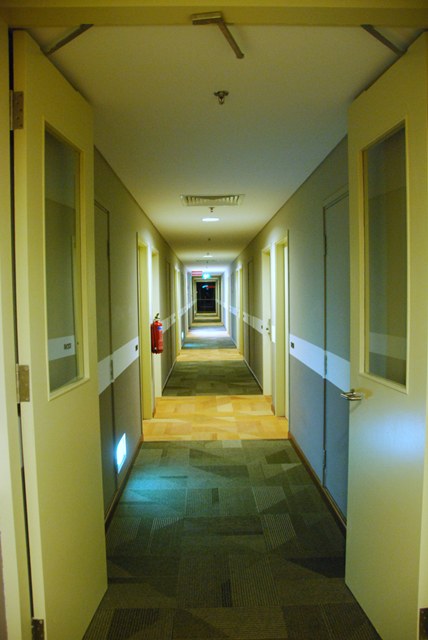 So this is our room with two single beds. My first impression was that it was rather small and basic. But as you look closer, you'll be amazed that it has everything most known hotel has en-suite. 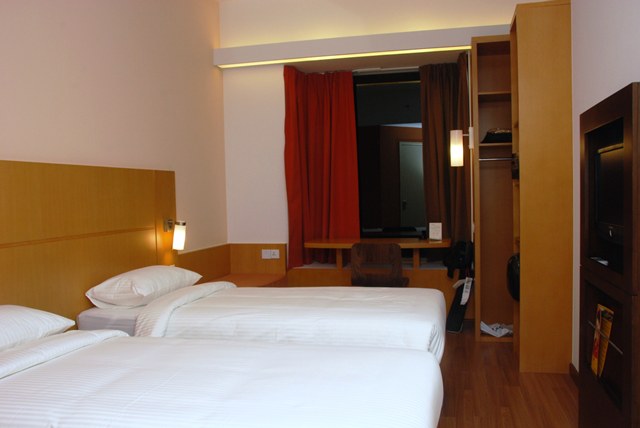 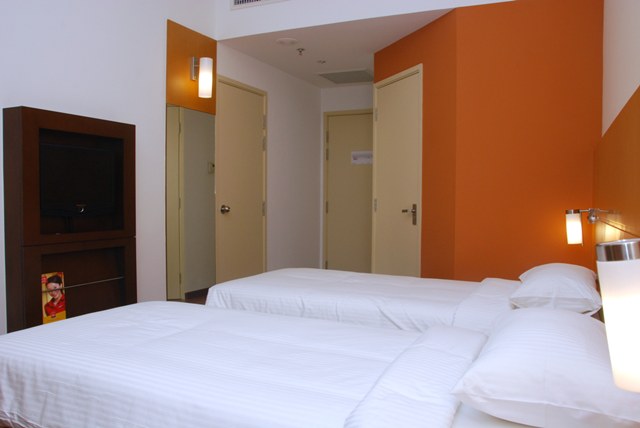 On the shelf to the left is a small safe, hot-water kettle with coffee cups and mini-refrigerator. An LCD TV with cable programming is on the right. Everything here is neat and space-savvy. 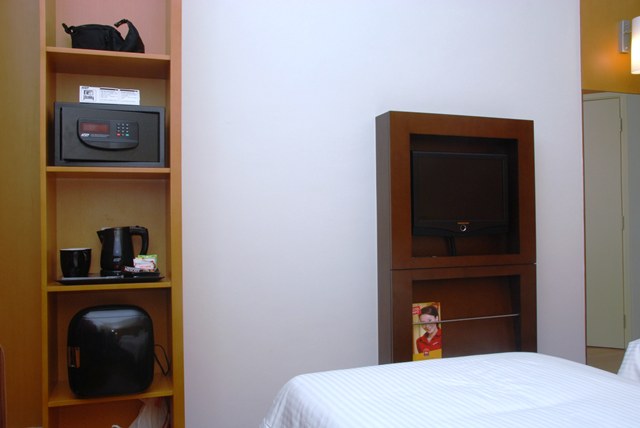 Even the bathroom is space-conscious! Inside it is a small but sleek toilet bowl. 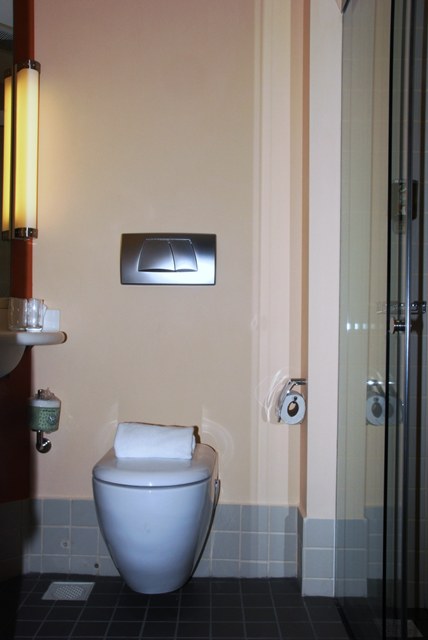 Beside it is the shower area, which is also compact. The dispenser on the left is for the hair/body shampoo. 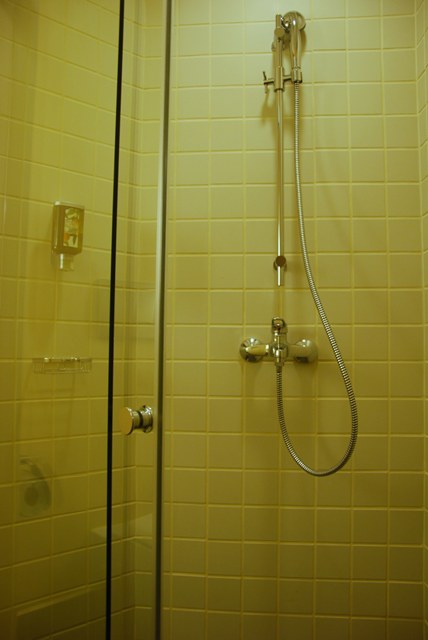 Our room view is facing the Bugis street and nearby temples and establishments. A vibrant area accessible to our hotel I thought. More of this will be explored as we continue our sightseeing around Singapore in the coming days. 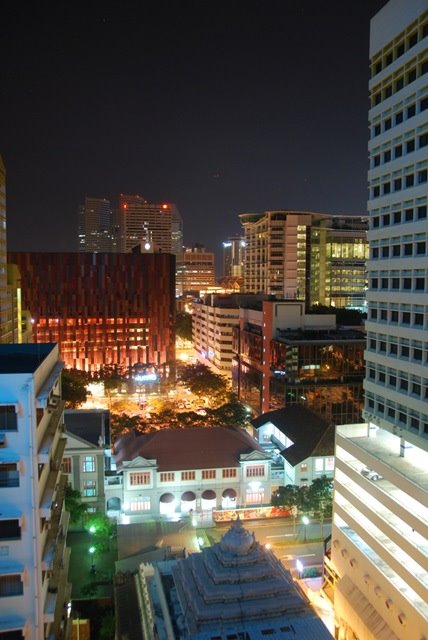 It has been a long day so after shower and last-minute checking of emails we decided to snooze and take that deserved rest for sunrise.

Coming up next, our escapades in Singapore!
Posted by jasperjugan at Tuesday, April 28, 2009

how cute, you have a deep dimple!

can't wait to see/read about your adventures in singa!

hey pepper! thanks for the review on ibis. first time i've heard of it and i might just book there in the future. looks like value for money.

@acey - yeah, i'm beginning to post some of the blogs and still writing others :)

i'm thinking to go to singapore in jan.2010...love you pix here...thanks for the visit..i'm following you now!!have a safe trip always!

hey!! I just recalled that you visited SG recently after enjoying your posts here. This Ibis Hotel seems pretty nice and conveniently located. I didn't notice this hotel before..

hi, i found your blog while searching for a hotel to stay in singapore. did you book your room at ibis online? if yes, what website? there seem to be a lot of online booking sites and would like to do my booking with a reputable site. thank you.

@blissful sahm - yes i did! from www.accor.com i believe