After we had our lunch at Modern Toilet, once again, we were back on the streets of Ximending district to see the stores and start shopping.

As we went out of the restaurant, I saw this sign on a small alley that caught my attention and ever wondered what it was all about because it is obviously highlighting something - Cannabis! 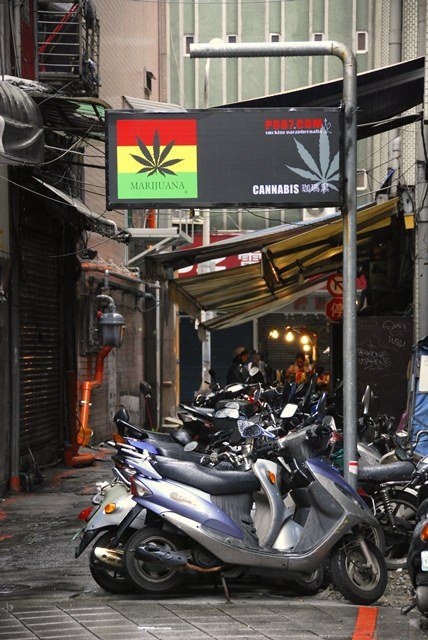 Wandering around, we also chanced upon the "hidden" Tien-ho temple. One may wonder how such exists in a district full of modern shops and fashion clothes. Must be a getaway and rest area for shoppers then? 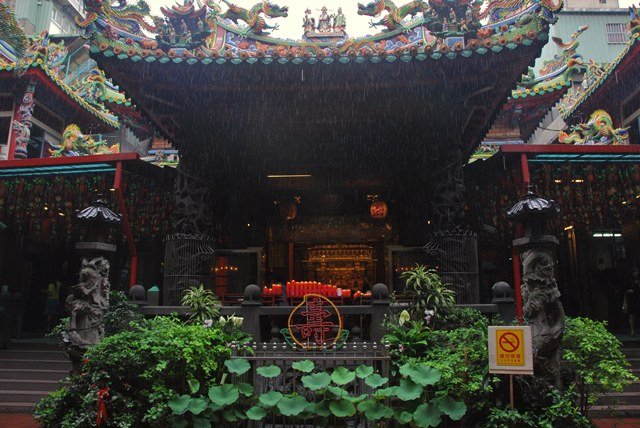 Taiwan is full of interesting things to see. This dog that got shaved caught my sight on one shop my mom was browsing and there are lots of these strange haircuts and "designer dogs" in the city of Taipei. 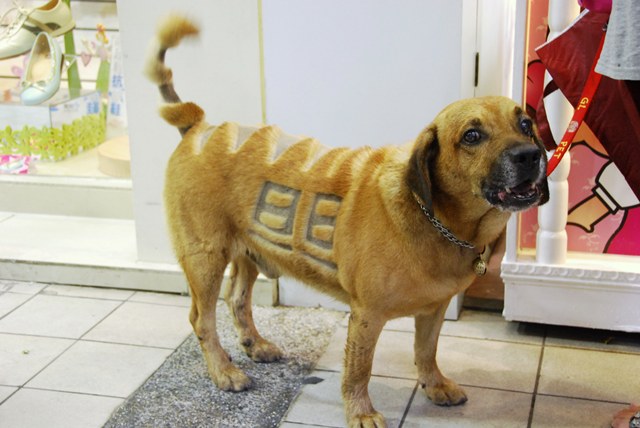 It was raining the whole time and it was a Monday so the district was almost deserted. A perfect time to shop, or so I thought, because you don't have to fight for time or squeeze yourself inside stores to have those finds. 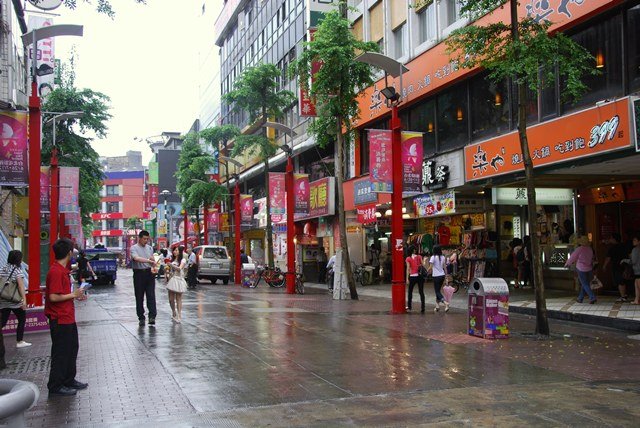 a welcome entrance to the marketplace 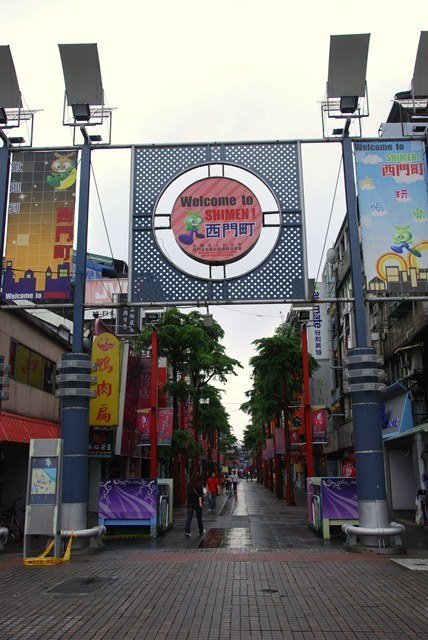 somewhere central to the shops 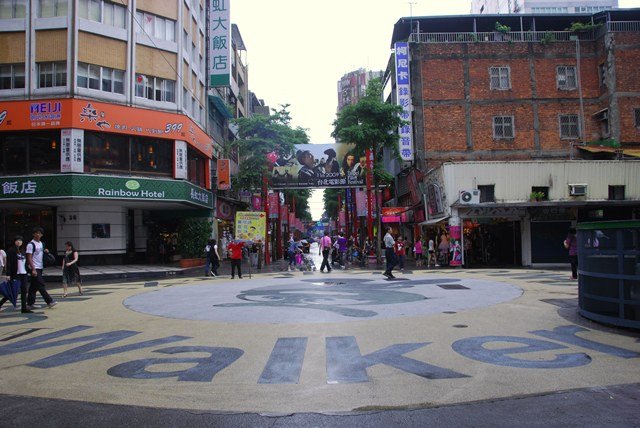 Also in Taipei, we've seen lots of these "moving advertisements" of food, restaurants, clothes, shoes, apparels, salons and anything else you can think of luring customers to go to their place, even when it's raining! 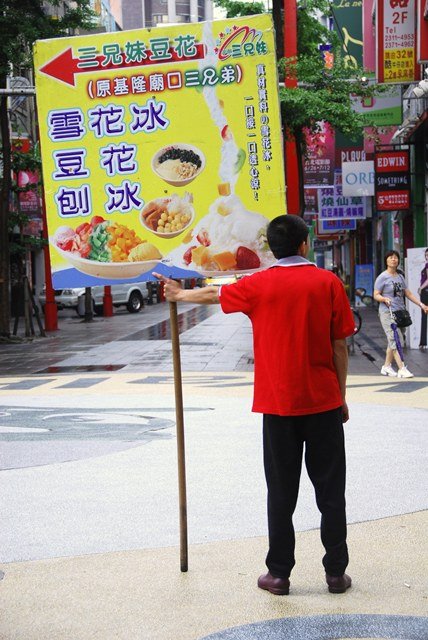 We just spent a couple of hours in Ximending and got the basics and we're off again to the MRT station. On the way, we passed by the the magnificent old structure of Red House Theater, built during the Japanese era in 1908 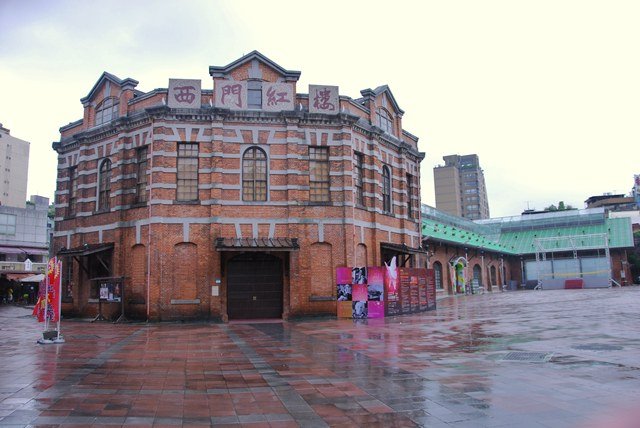 From Ximen MRT station, we're off again, this time to Longshan Temple MRT station (NTD20) to visit the temple. This was our last day to go around the city and I really appreciate the convenience of MRT that allowed us to do and visit a lot of things in one day. 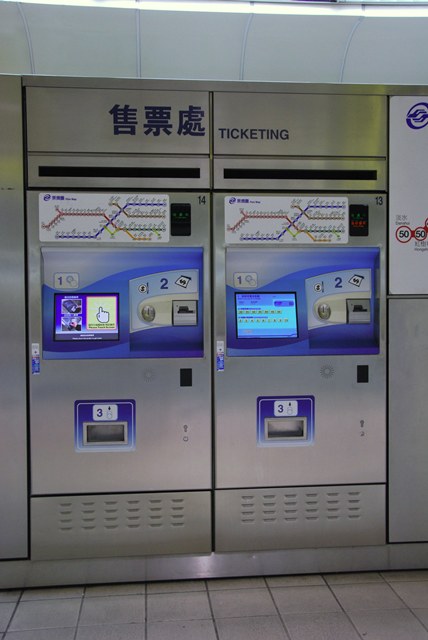 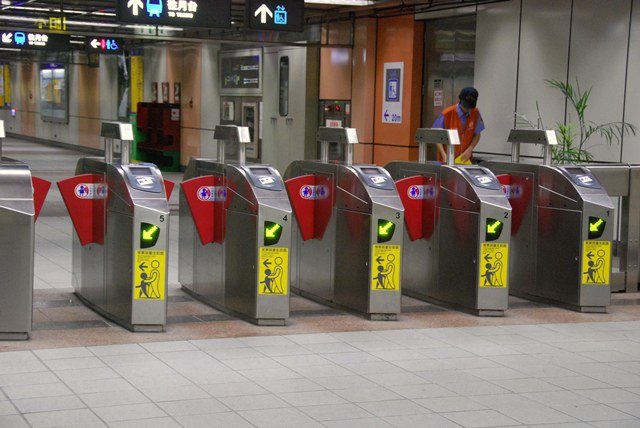 But before we got to the temple, more shopping! On the way to Longshan Temple, we passed by an underground mall and bought a few things from the stores. 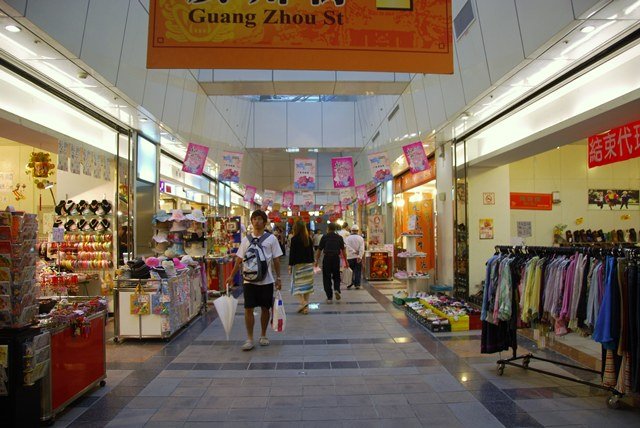 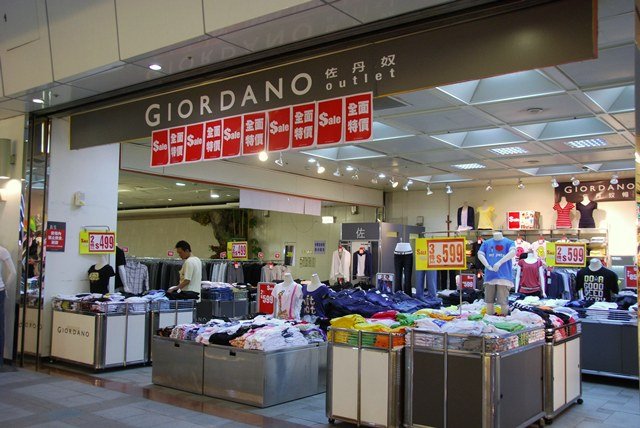 Longshan Temple is considered the grandest temple in the city of Taipei. It was built in 1738 and is another example of an architectural prestige of Taiwan. 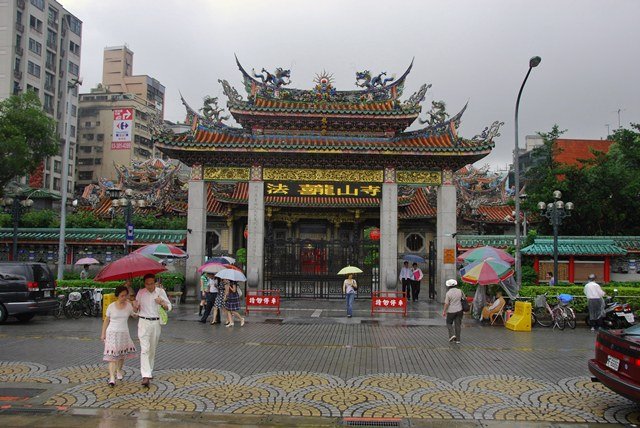 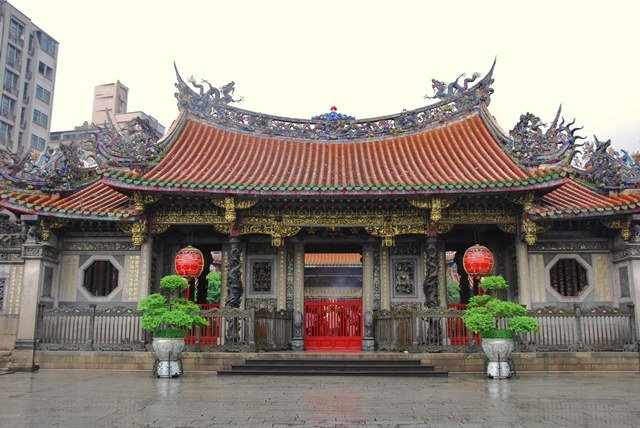 courtyard of the temple 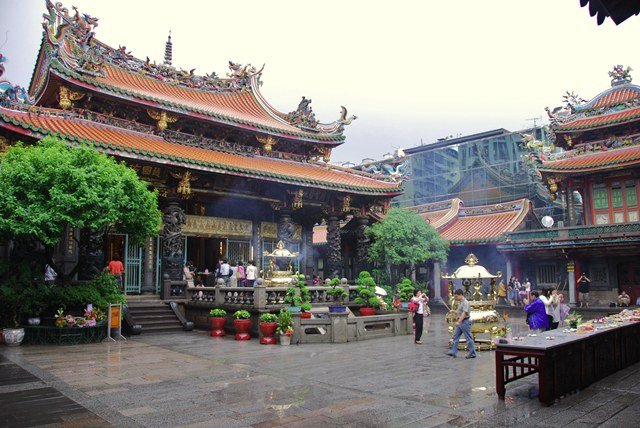 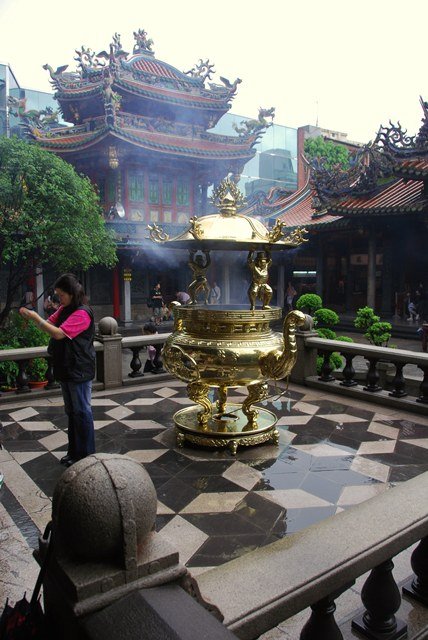 My mom and I respect cultural diversity and we always try to pay homage to the beliefs of local people whenever we travel. 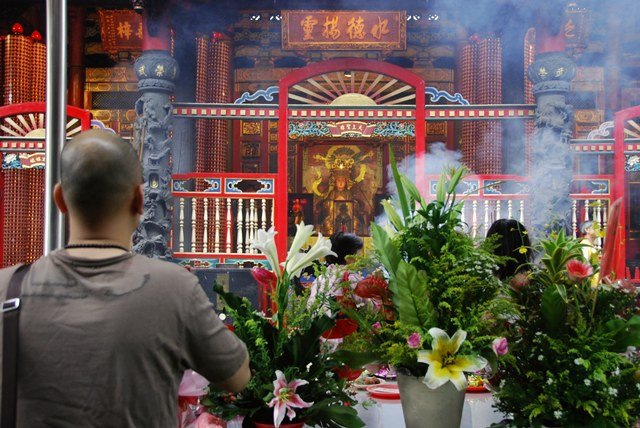 We then proceeded went back to Longshan Temple MRT station and rode a train to Chiang-Kai-shek Memorial Hall MRT station (NTD20) to have access to none other than the National Chiang Kai-shek Memorial Hall, dedicated to the former President of Republic of China. The Gate of Great Centrality and Perfect Uprightness stands proud right across the main hall. 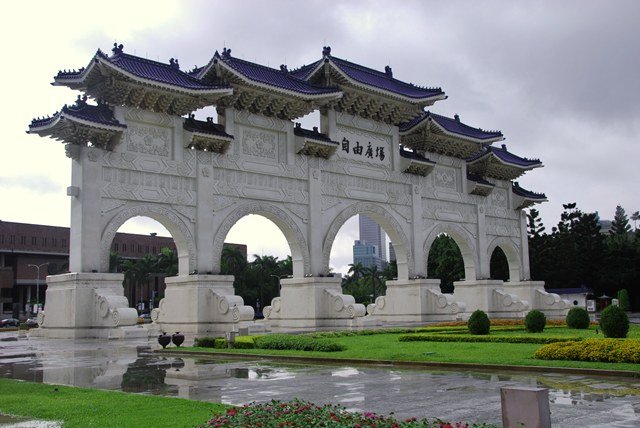 The whole park is so vast (240 square kilometers) that it takes minutes to reach the memorial hall. Aside from performance venues which you will pass first from the gate, midway is a big flagpole area. 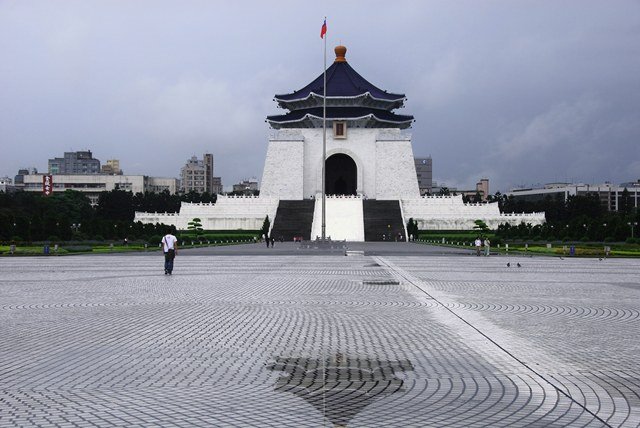 From the gate, visitors will pass by these two buildings which may be confusing for they look the same. The twin buildings that stands right across each other are collectively called as the National Theater Concert Hall and are the national performing venues of Taiwan:

National Concert Hall, located on the left when facing the memorial hall 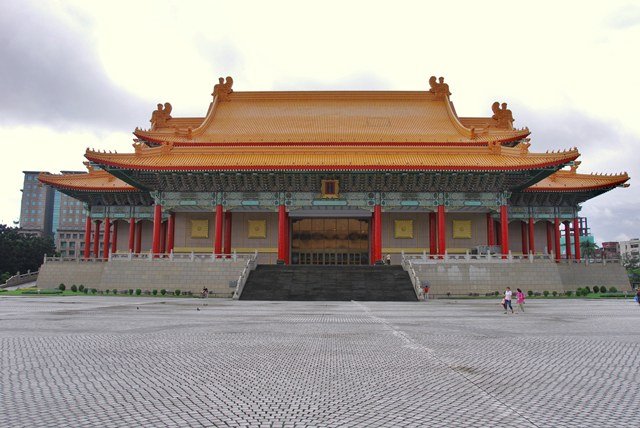 National Theater Hall, located on the right when facing the memorial hall 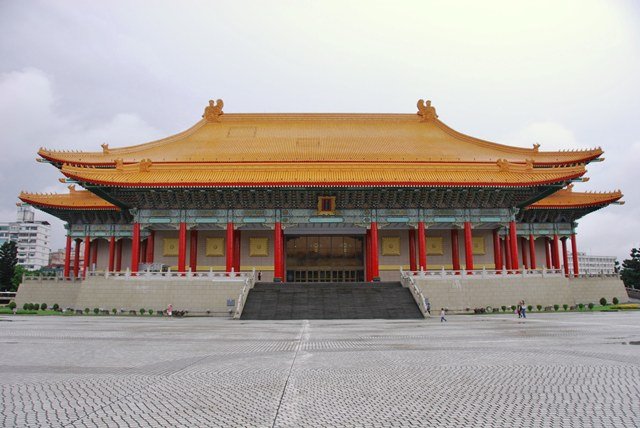 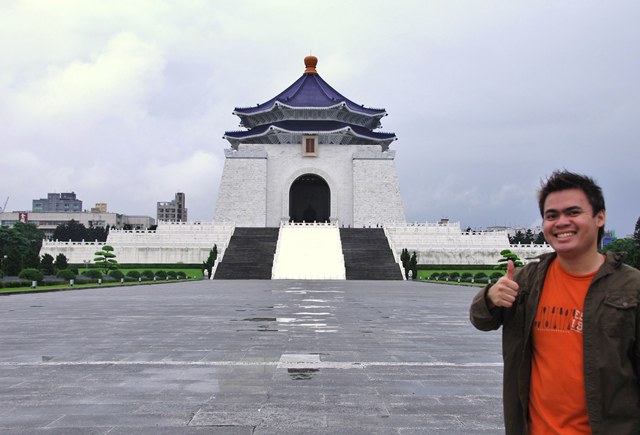 The hall may look small in the picture but it isn't. It can be tiring to run on your way up and a lot of visitors usually take time and enjoy the view. My mom wasn't able to join me to the top because she had problems climbing up stairs these high. 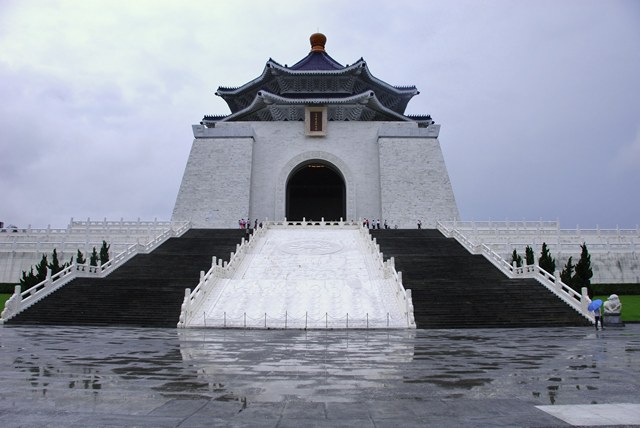 Inside the memorial hall is a statue of Chiang Kai-shek. 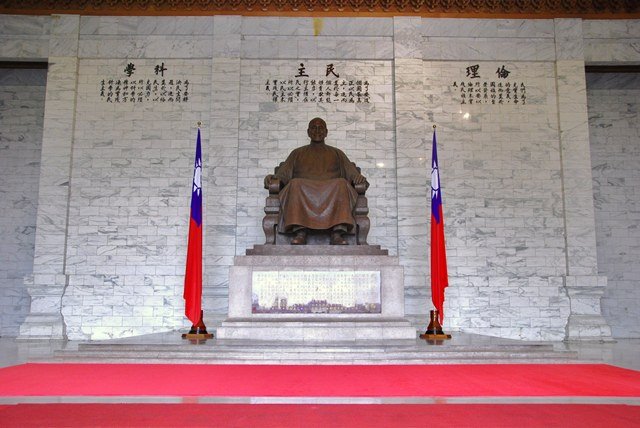 view of the park from the top 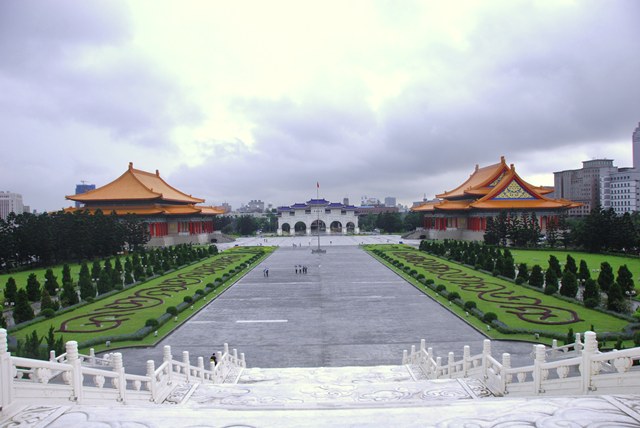