Another one of those sudden and unplanned road trips again.. one Saturday evening, it was almost midnight and just as I got back from the university, I received an instant message from Jojo to go to for a road trip down south early in the morning the very next day. Without thinking much and in a whim I instantly said yes even if I was purely exhausted that day for the lack of sleep the night before and being hyperactive after a few bottles of vodka.

Early July 5, I was passed by Jojo near our place and we went off to Alabang to pass our other companions, Luis and Patrick M., who will be joining us on this trip. After having breakfast, we went inside the car, got the map and scouted for our goal that morning. I pointed to the farthest point southwest of the map which is Cape Santiago in Batangas and our ultimate destination is to see the lighthouse in the area, passing by the usual Tagaytay route to Nasugbu in Batangas.

We had a hard time finding the right path to the lighthouse when we reached Calatagan in Batangas because we had to drive through an off-road to reach the place. At first, we saw an off-road just a few meters away from where we should have turned and at the end reached what seemed to be a private compound. There was a blocking and it was a good thing we did not insist to come in because it was the wrong one. 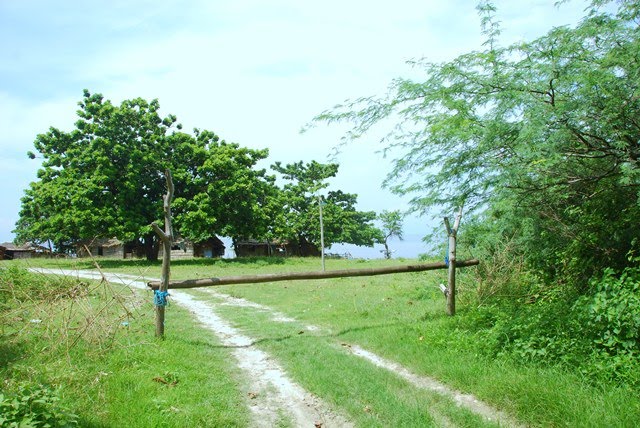 Turning to other alleys and asking locals around, we finally found ourselves standing in front of the Punta Santiago lighthouse. The structure built in 1890 is still being used today to guide seafarers passing through the waters between mainland Luzon and the islands of Mindoro. However, the compound is enclosed in another gated area which driveway was closed so we were not able to come near it. 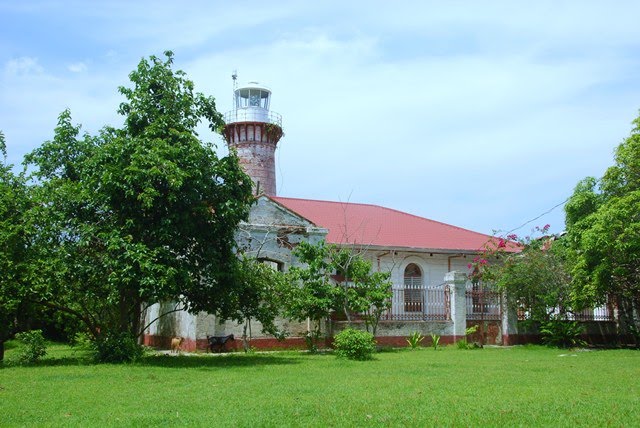 And then we saw the rocks that seem to lead to the breakwaters where one would presume to have a better view of the lighthouse even from afar. We braved and climbed down the rocks over steep heights and sharp-stoned shores. 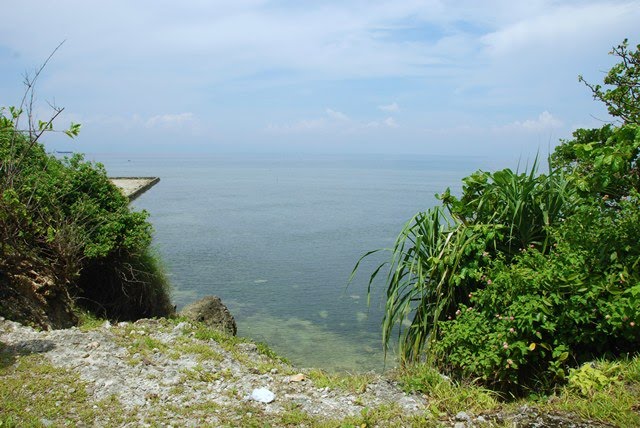 It was disappointing to see this view from down there however. Half of the structure was covered by trees and the it's almost the head that is visible. 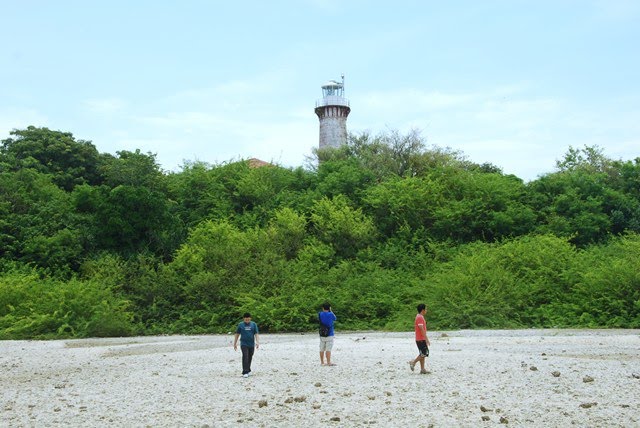 Unamazed, we went back after spending a few minutes in the shore enjoying the cool breeze on that very hot sunny day. When we got up, there was a guard nearby and he gave a tip to us that we can actually get near the lighthouse by foot by following a different path. Minutes later and we found ourselves standing right in front of this beautifully bricked century-old structure. Supposedly there should be a stay-in caretaker but he is nowhere to be found at that time so we were not able to go inside. 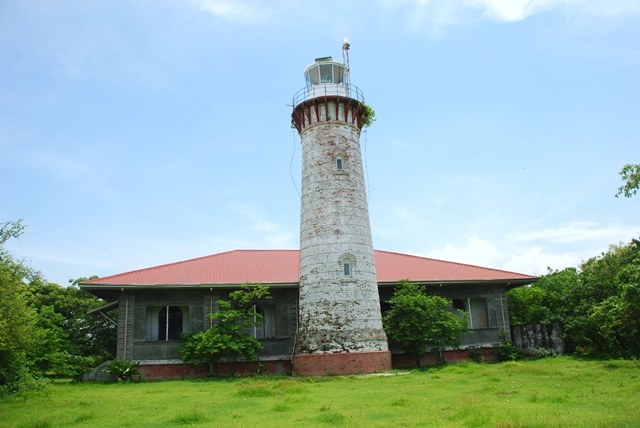 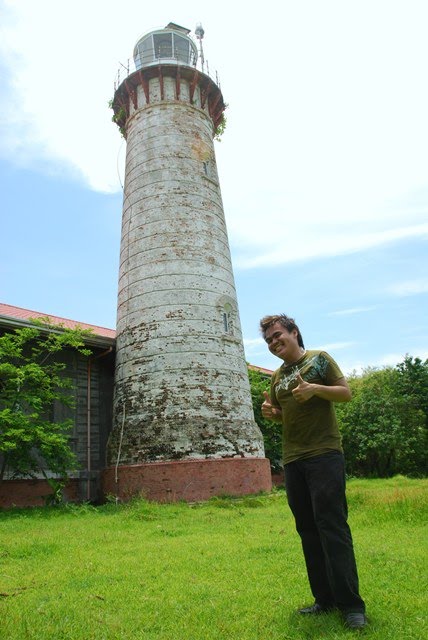 a cow, tied up near the lighthouse 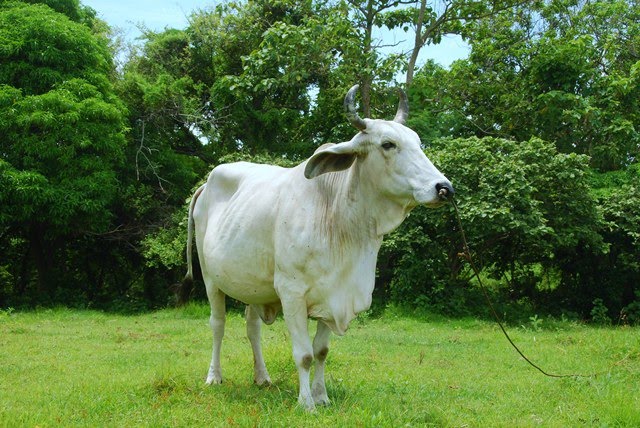 For lunch, we headed back to Nasugbu proper in Batangas to look for a place to eat. We almost made up our mind to eat in Jollibee, following the road signs leading to it when we saw a signboard that says "Kainan sa Dalampasigan". Immediately we turned left and decided to have our lunch instead in that place that sounded promising.

Kainan sa Dalampasigan literally translates to a restaurant or an eatery that is "by the shore" but we were surprised to enter a zen garden compound where a shore was nowhere to be found. The place looks nice however, and the drive-by entrance had an effect to it so we still decided to stay and have our lunch here. 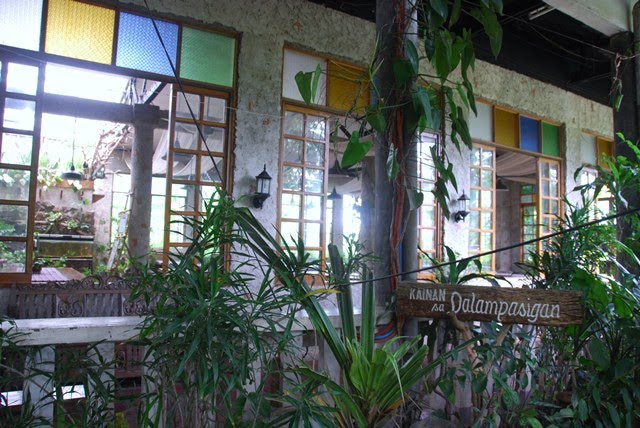 As we entered the premises, we were welcomed by a small man-made waterfall with vines clinging from the ceiling. Very nature-oriented and relaxing ambience! 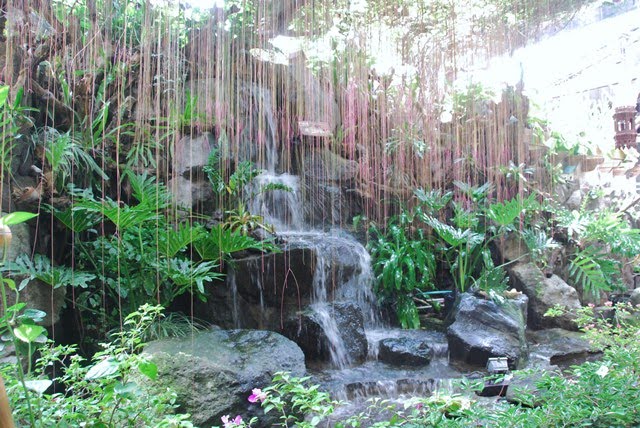 Guests are asked to sit down and huge open-air dining hall which make one feel like eating in a marvelous garden. After we sat down, we immediately ordered for food and got the ones recommended by the server. 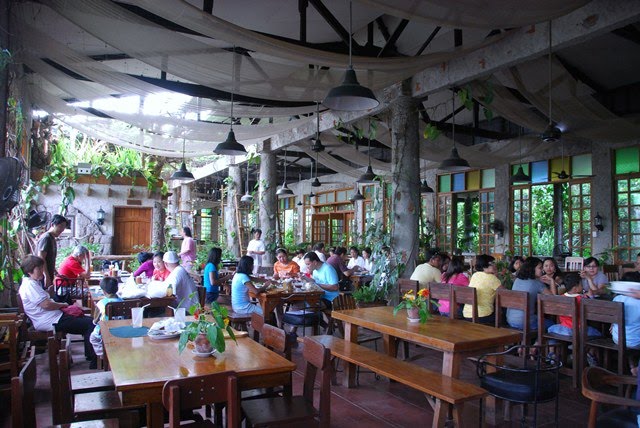 This was the iced tea that I had. Literally half of it was ice (upper part) and the lower part is the lemon-flavored tea. It was yummy and refreshing although it was full of air that I felt I needed another glass to quench my thirst. 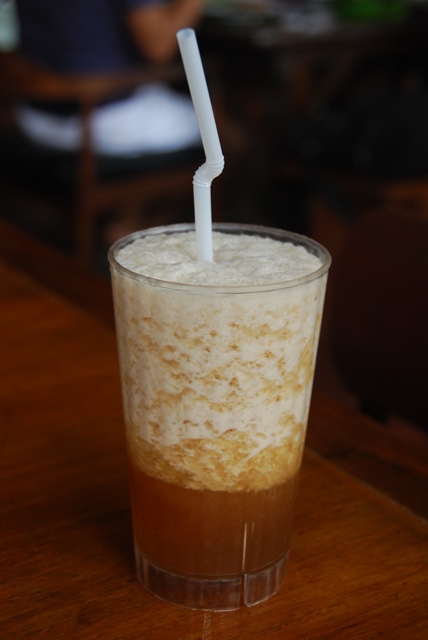 We got a basket of items containing grilled shrimps, fish, clams and pork served with mangoes, tomatoes and onions with sauteed shrimp paste sidings. 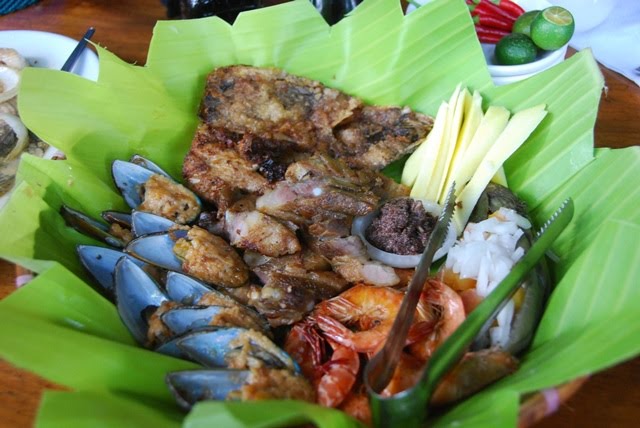 The restaurant is famous for it's Tangigue Steak. Tangigue (fish) is cooked and put into a sauce topped with onions. Very tasty and it didn't taste like it was fish! 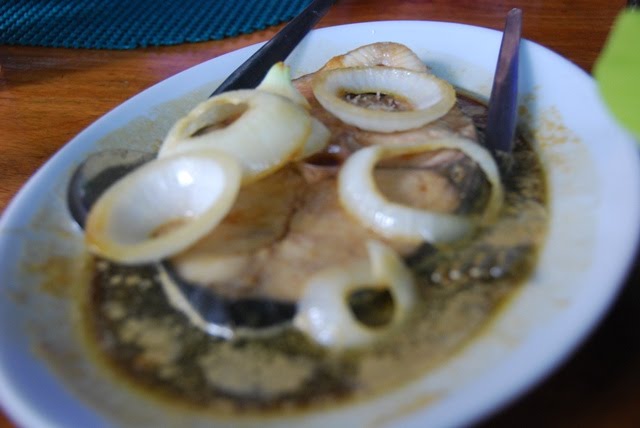 Bulalo - a soup serving of beef meat and bones slowly boiled into perfection, added with vegetables and corn. One of my all-time favorite dishes best served with fish sauce but the bone marrow is something that shouldn't be taken frequently for health reasons. 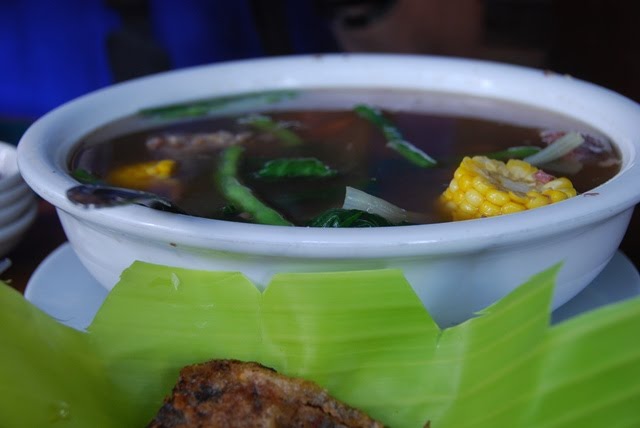 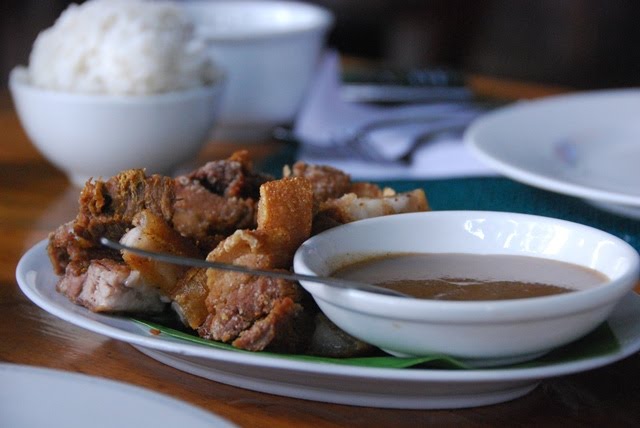 I had a nice and filling lunch at that time and even though we came in very hungry, the four of us weren't able to finish everything we ordered because of the large portion of servings.

With nothing else planned to do for the rest of the day, we headed back to Tagaytay and during the course of discussion, decided to turn and head to Caleruega. This place ran by the Roman Catholic priests of the Dominican order is a famous wedding venue and spiritual retreat. Because this is a religious institution, visitors are discouraged from making noise and activities that will disturb the serenity and peacefulness of the surroundings. 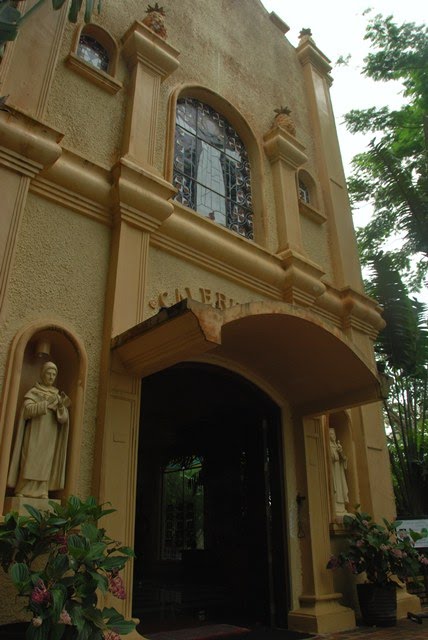 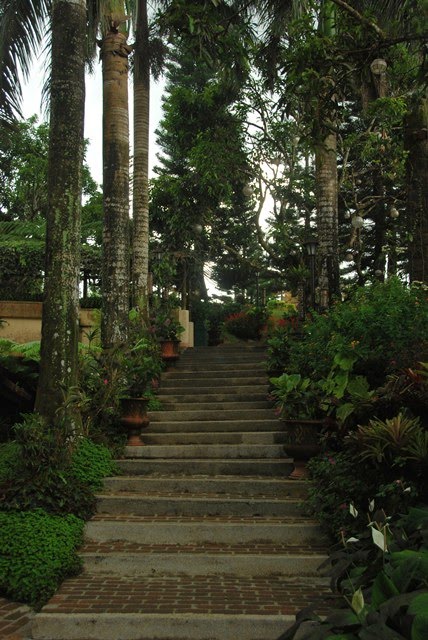 view from a point in Caleruega 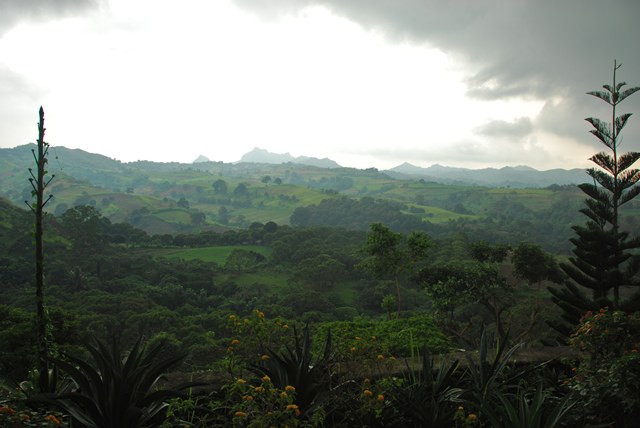 At the peak of the compound is the transfiguration chapel, a small but intimate place to reflect and talk to Him and a popular wedding venue. 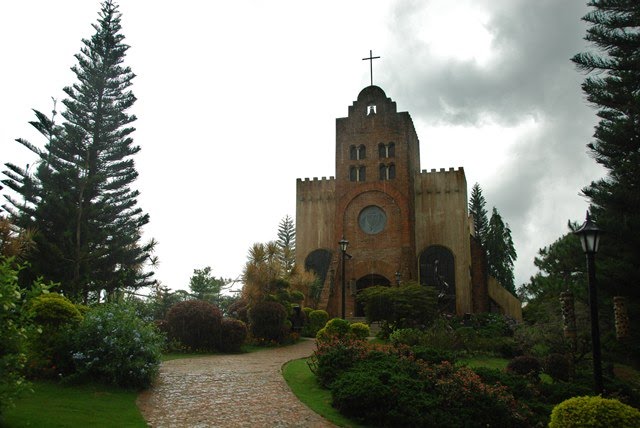 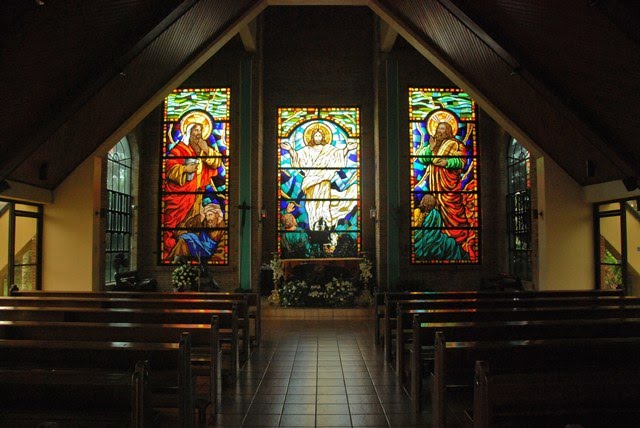 It was raining and we had to run for cover on our way down to the parking lot. We stayed for a few minutes here while talking about things and appreciating the beauty of nature and sweet ambience of silence. 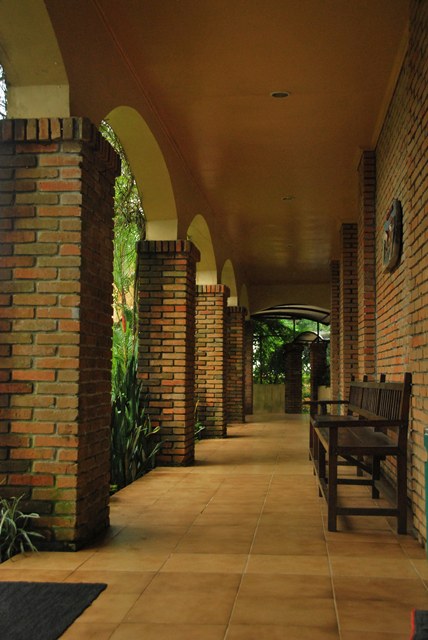 On our way back to Manila, we saw signs to pass by an alternative route and later found ourselves coursing through Cavite and later on reached the Aguinaldo Shrine. The shrine is the home of Emilio Aguinaldo, the first president of the Republic of the Philippines. The house itself was already closed so we weren't able to see the and browse through the museum but we still wandered around to take pictures 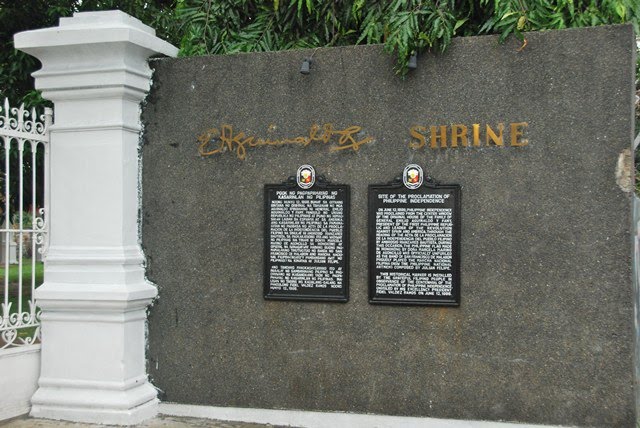 This is me in front of the Aguinaldo Shrine. The balcony behind me is historical because this is where the Philippine flag was first raised by Emilio Aguinaldo proclaiming Philippine independence last June 12, 1898. 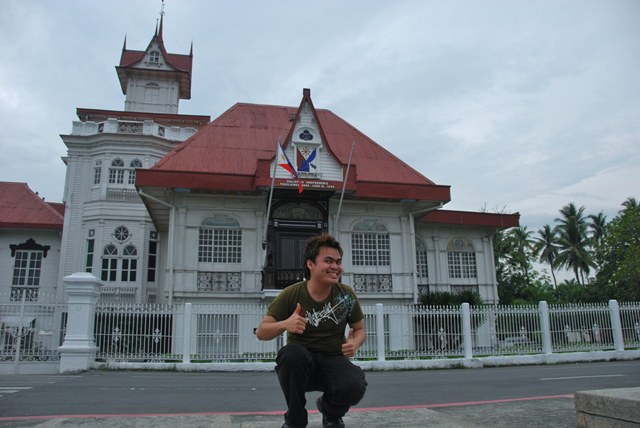 house of Emilio Aguinaldo, a large flagpole carrying the Philippine flag and a monument 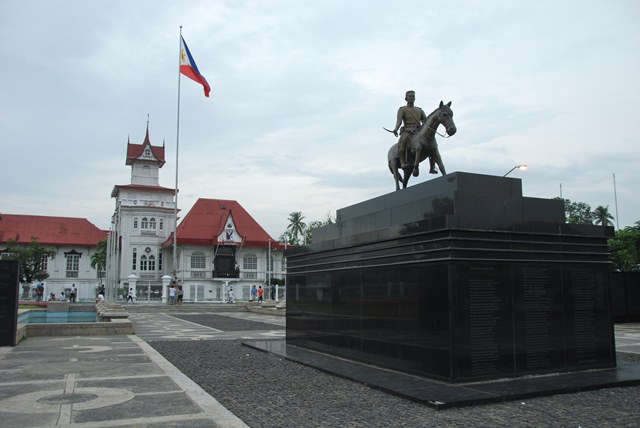 Right inside the park grounds, a group of skaters are taking advantage of the closed area to play. 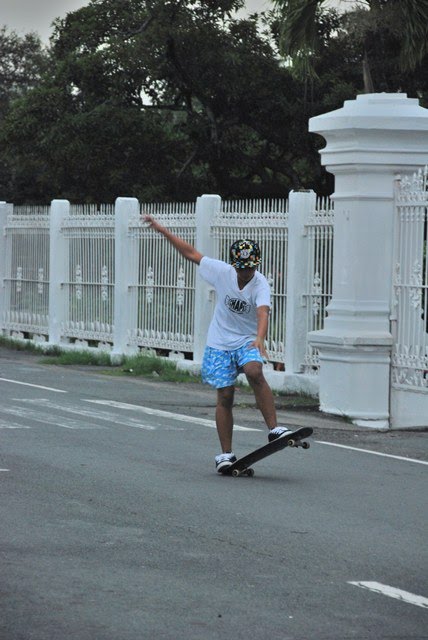 Again, another road trip that turned out successful even without prior planning. We've covered a lot that day and again hoped for the next driving day trip out again as we headed back home.
Posted by Jasper at Tuesday, July 14, 2009

That's a nice unplanned trip! I guess you guys enjoyed the journey too!

oooooh, that dalampasigan restaurant is beautiful! now i just need to get my butt to subic. :D

I enjoyed reading your experience. It's a good adventure for me. Hope I can also do unplanned road trips!Cagayan de Oro philippines

This sure was quite the travel and delight. Would love it even more if the price tally is mentioned so taking on an adventure whim like this would be possible. Still living in Cavite sure will be filled with historic and good food.