After watching 2008 World Pyro Olympics exhibition of Venezuela and Italy, Chester and I were already hungry and was looking for a place to eat. Every known fast food and restaurants were full because thousands who watched the exhibition were out to do the same. Chester suggested that we try Church's Chicken and see if their chicken here tastes the same as those stores in North America region.

I've passed by a lot of Church's Chicken in the U.S. and Canada but I didn't get a chance to eat on one like Chester. A quick search on the internet later informed me that it is one of the largest chicken fast food in North America. This branch in SM Mall of Asia (which is considered the 3rd biggest mall in the world as of this writing) is the first in the Philippines in their attempt to penetrate the Asian Market. 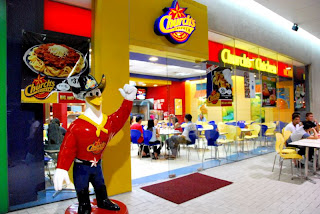 From the looks of the store, it seems to be positioned as a mainstream quick-eat fast food chain. The prices are very competitive and affordable too. 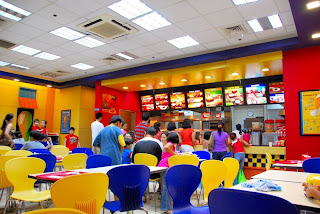 Now time to try out the chicken. We ordered a 2-piece chicken meal which includes regular softdrinks and rice for 117 PHP. I had my drinks enlarged for additional 10 PHP. 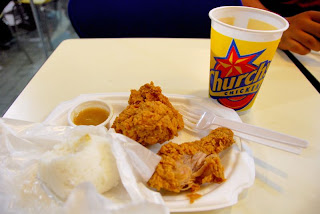 The chicken was served hot so it was great! I always want my food served fresh right out of cooking. Crunchy skin, juicy meat, large piece servings... not bad! Though I'd say it's not really the best chicken there is, I'd give it a rating of 4.5 out of 5. The store also serves other food items in the menu, including chicken sandwiches and deserts, 2 of which are ice topics that I believe are served only in the Philippines - Buko Pandan and Halo-Halo.
Posted by Jasper at Monday, May 26, 2008