Siangde Temple and going back to Taipei

This will be the tail-end of our visit to Taroko National Park and day trip to Hualien, and the last stop Mr. Lu brought us to inside the park is on the trail of Siangde Temple. We had enough trail for the day and we just came from a 2-hour in Baiyang Trail so we just stayed outside and took pictures of the Buddhist temple and the area surrounding it.

Without trees covering the structure, the temple is known to locals as Jiuhuashan (9 lotus) of Taiwan because it looks like 9 lotuses from afar. 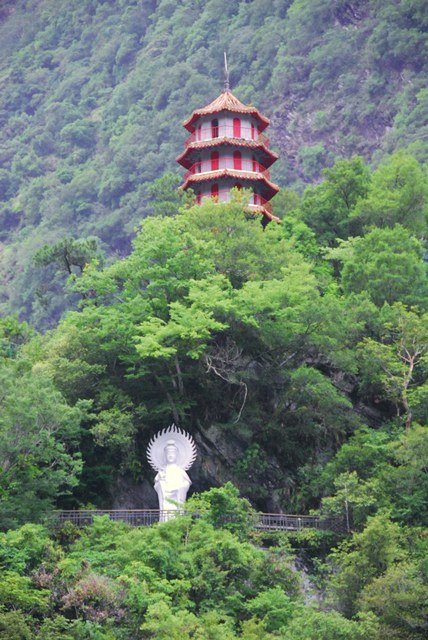 The trail to the temple starts by crossing the Pudu bridge, then steps going up to the temple. It will take an hour to reach the place and be back from where you started. 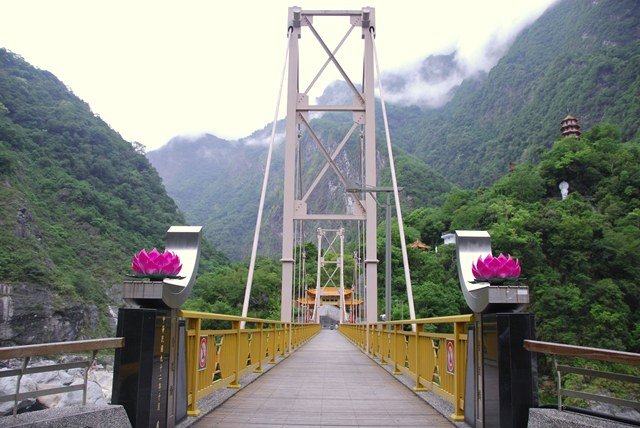 Down on the river bed which seems to be dry at that time, we saw a couple of writings made of stone and found it amusing. This one reads "Pudding I Love (heart) You". 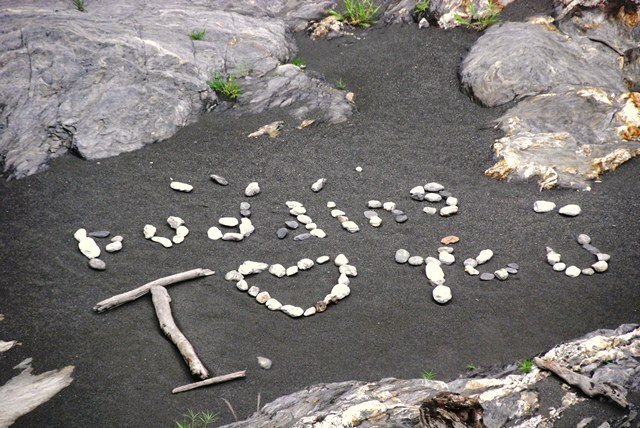 As for the other, I can barely read it anymore. 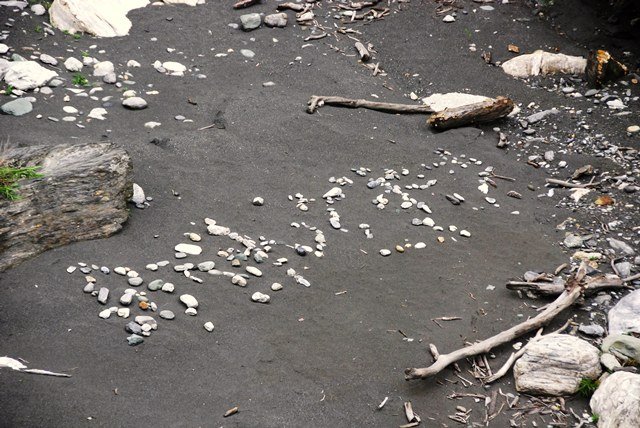 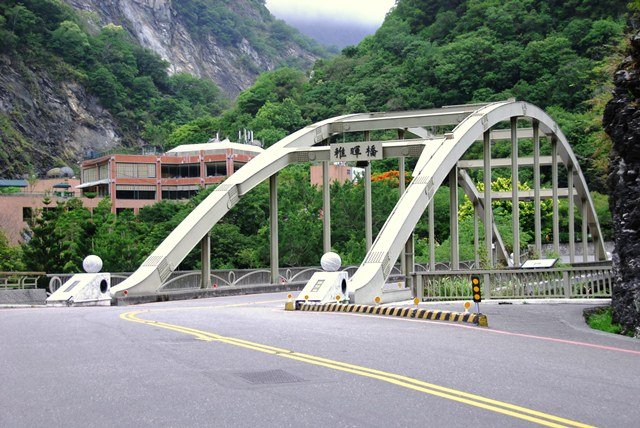 When Mr. Lu learned that our return train is not a Taroko Express train and is Tze Chiang 1078 that leaves Hualien by 8:00PM and arrives in Taipei by 10:30PM, he offered to try to change the ticket in a nearby train station to a Tze Chiang 1096 that leaves Hualien 30 minutes (7:30PM) earlier but arrives in Taipei by 9:45PM, 45 minutes earlier than our original station. He brought us to Beipu station, took our tickets and tried to have it exchanged, which I have learned he has done for his other passengers successfully as well. 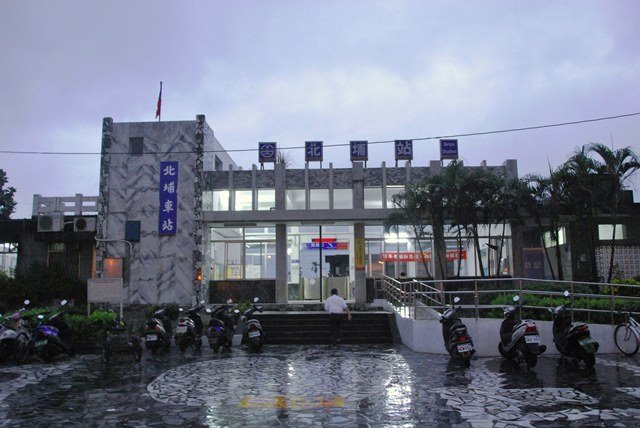 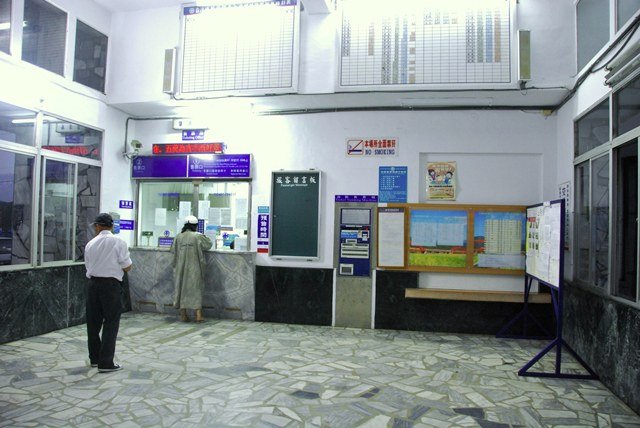 The earlier train however was fully booked so we had to stick to our original booking on the slightly slower train. He then suggested that we just have our dinner in Hualien City before we board the train. 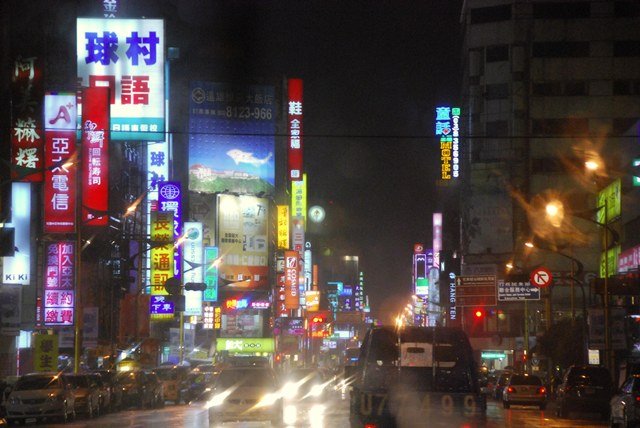 Initially, he wanted to bring us here in an area where street food stalls area. However, he knows that we need him to buy something to eat and we had a hard time looking for a parking space, so he brought us to another place instead. 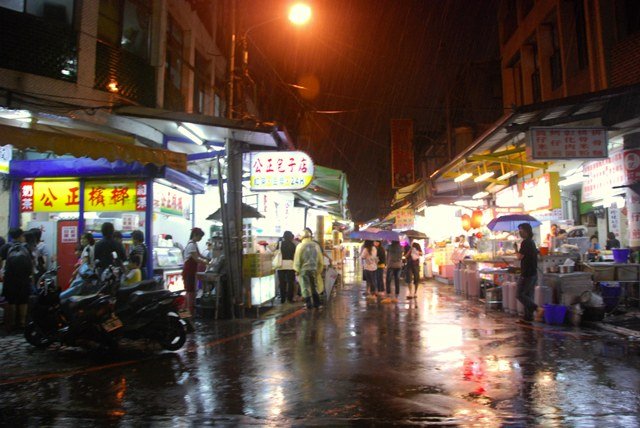 He brought us to this place that sells wonton soup and promised that they are good specialty food in Hualien but I didn't get its name. As I researched for its when I got back to the hotel, several websites pointed me to the name of the eatery - Fragrant Wonton (Yishang Bienshi), located in 42 Sinyi Street Hualien, Taiwan and may be contacted via + 886 3 8326761. 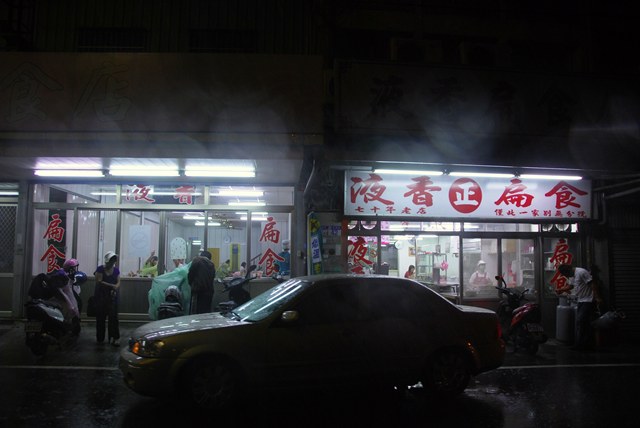 Further research shop is said to operate for more than 70 years already and that they use the meat found in pig's leg because they have a better consistency and leaner. 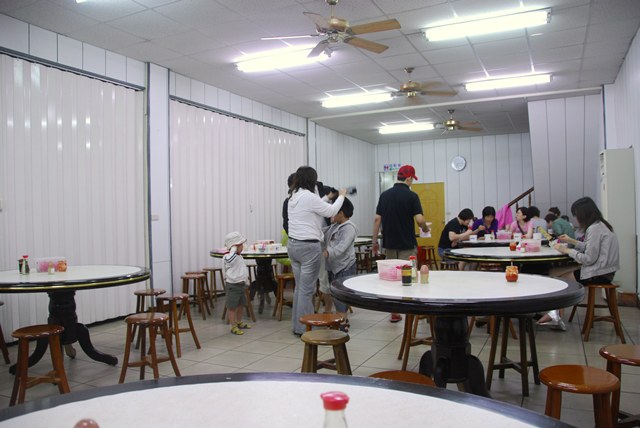 The 3 of us (me, my mom and Mr. Lu) each had a bowl of the famous wonton soup (bienshi). It may look small but this is actually huge and I had to force myself to finish it while my mom only made it halfway. I had wonton soups a few times before and I am not exaggerating here when I say this is the best I ever had! Too bad though that the condiments available were only chili paste and vinegar because I'm used to dipping the meat to soy sauce with calamansi (lemon), mixed chili garlic oil but nevertheless, I enjoyed this wonderful delight. At last, we had at least a specialy from Taiwan with the help of a local! 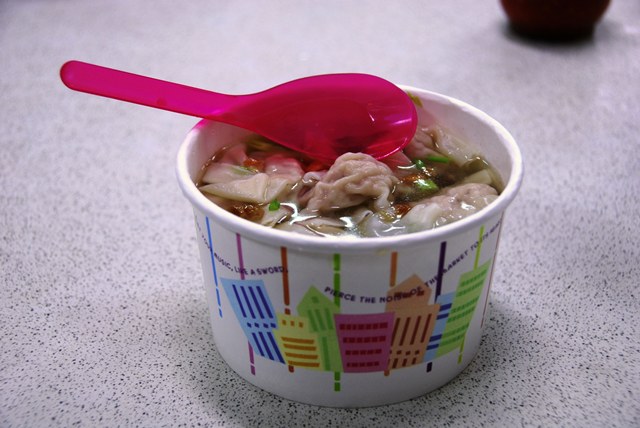 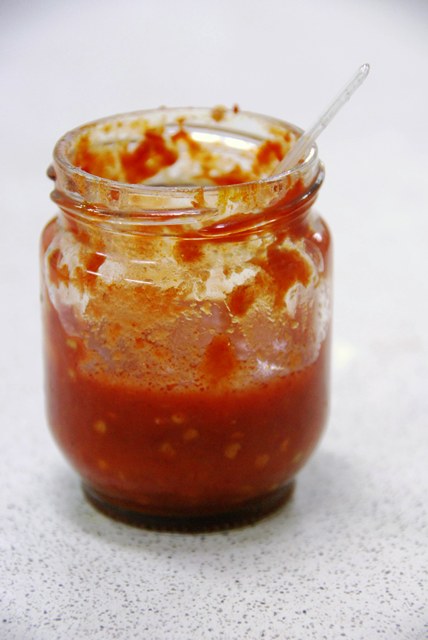 So this is how they make the soup - the wonton is made of meat from the pig's leg and wrapped in a hand-made covering, and they boil the soup with the bone of pig's leg while remove the floating fat from time to time. Celery and onion leaks over the soup. I could swear that I am drooling again as I write this post. 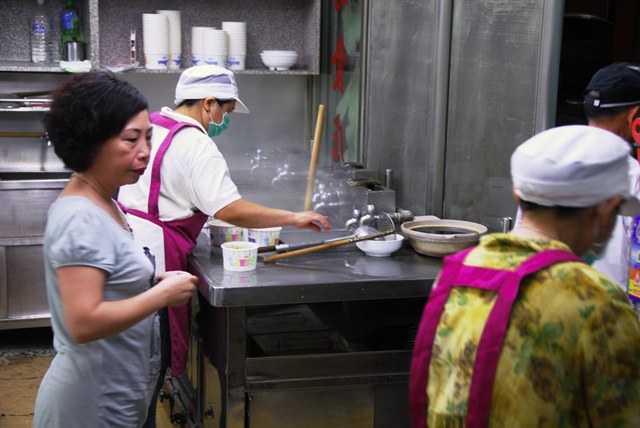 Mr. Lu stopped briefly outside a store near the train station and asked us to buy muah chee (mochi) or glutinous rice cakes, another delicacy Hualien is famous for. However, the time then was less than 10 minutes before 8:00PM and since the train leaves as schedule, we declined and asked him to take us to the train station instead. Our cabbie is very friendly and I highly recommend him to anyone coming here! I paid for his service as we reached the entrance, added a couple hundreds more for tip and I thought that's the end of it but he insisted to come with us to the train station and even asked the guard to allow him to come inside the train station so that he can guide us to the right platform. 5 minutes before the train departed, we were already outside our train car and thanked Mr. Lu for his wonderful service. 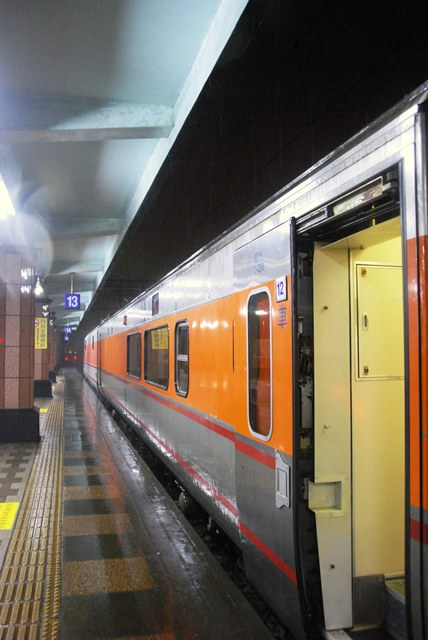 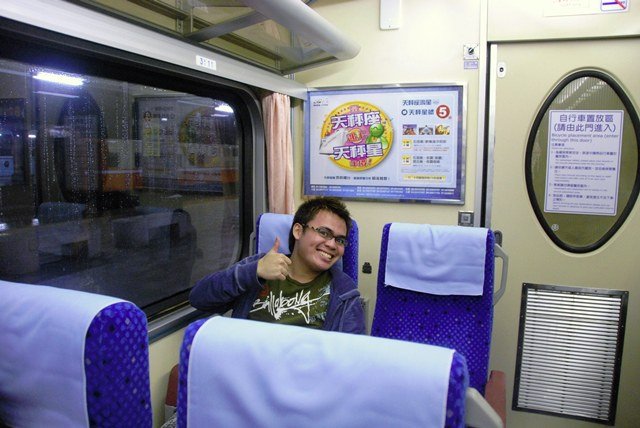 inside our train car 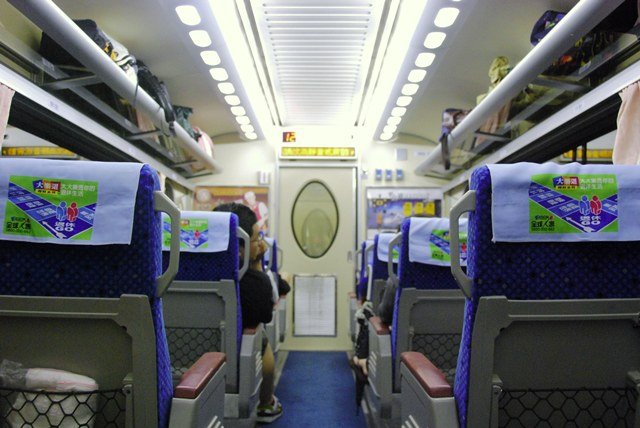 my ticket back to Taipei 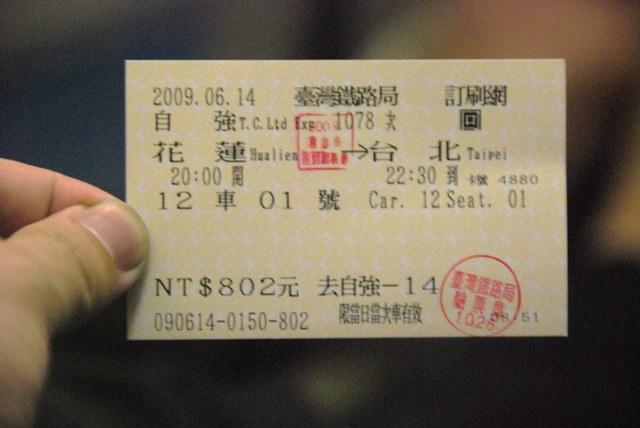 Most of the time on our journey back was spent taking short naps with a few instances of waking up. We arrived and alighted in Taipei Main Station as scheduled by 10:30PM and I readily took a photos of the train from the back before we leave the platforms. 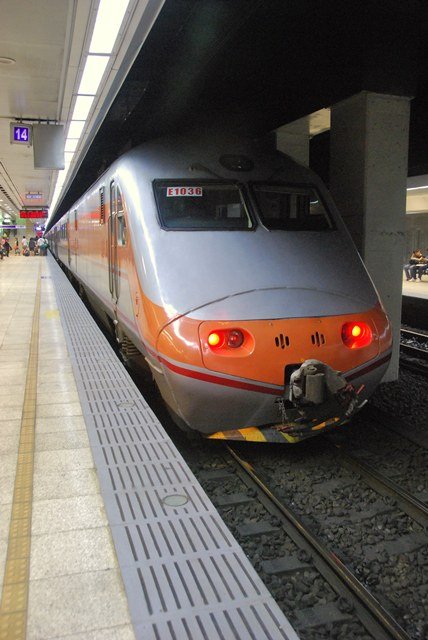 It was a wonderful experience for me and my mom! Not only did we have a wonderful time in Taroko National Park and Hualien, but the company of Mr. Lu who eagerly explained everything to us and even crack jokes made everything easy flowing and fun.
Posted by Jasper at Thursday, June 25, 2009