One power lunch and we're ready to go! The late lunch we had at P.S. Bu Bu during our first day in Taiwan is all we need and we're rolling again hungry to explore more of the city.

First on our list is to visit National Palace Museum, the national museum of the Republic of China. Instead of going back to Shipai MRT station by bus, I just hailed a cab that drove us to the museum in 15 minutes and brought us straight to the Main Building (Exhibition Area 1).

The museum is said to house the biggest number of Chinese artifacts in the world and that they had to rotate displaying the 655,707 items every 3 months. Each set averaging 15,000 items means that a visitor has to come back at least every quarter for almost 12 years to see every item in the museum.

me at the front facade plaza of the main building 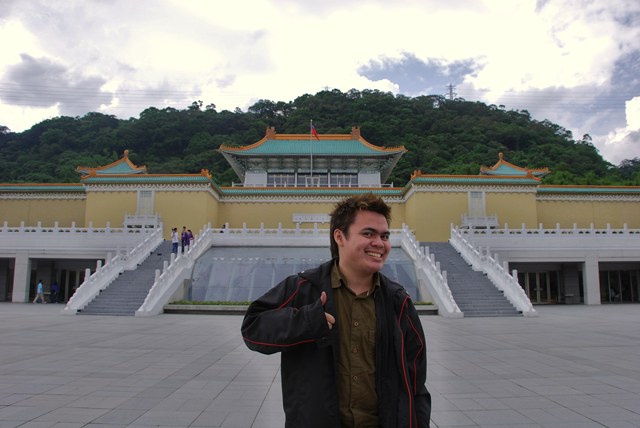 Other buildings of the museum are the Library Building (Exhibition Area II) and Administration Building I. 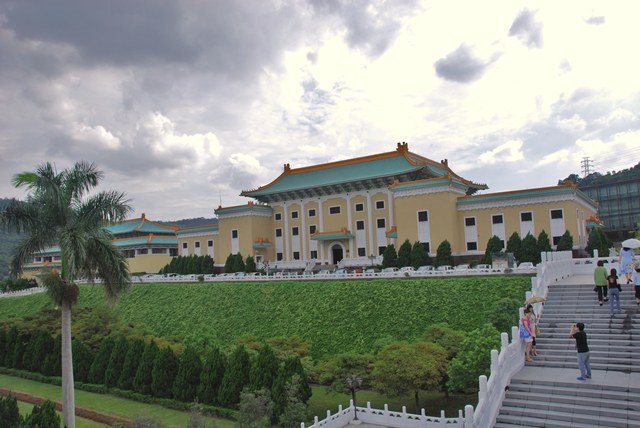 view from the front facade plaza 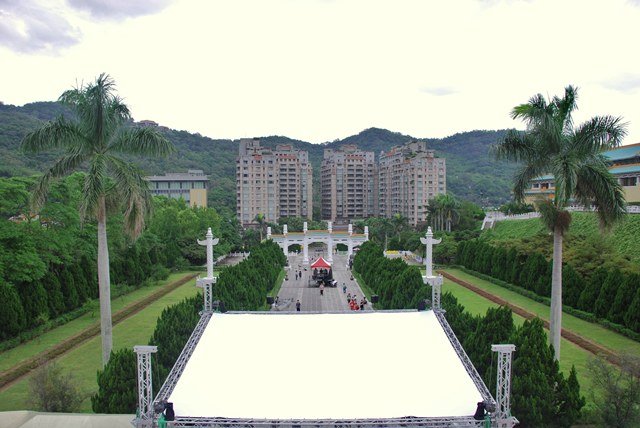 T'ien-hsia-wei-kung Archway, the main entrance of the museum 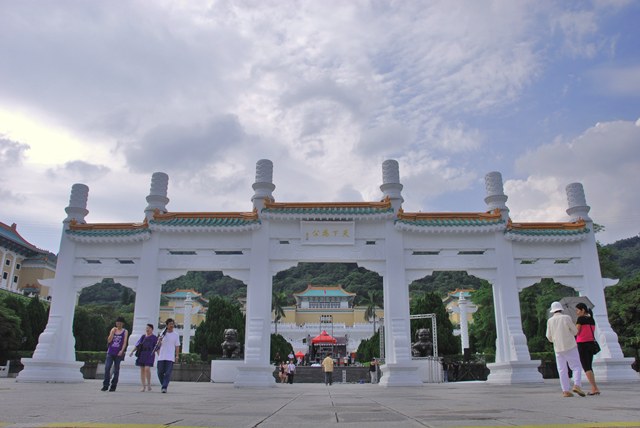 Yes, we intentionally didn't go inside the exhibition area. There are displays at the public area but we didn't pursue more than that. Not because we do not want to pay NTD160 for the admission, but more of due to not having much time and complete appreciation in arts. I intend to go in one day when I'm back in the city.

From the National Palace Museum, we hopped on Bus 304 right in front of the entrance archway, paid NTD30 each and got off at Shilin MRT station 15 minutes later. From Shilin, we road a train back to Taipei Main Station and changed trains bound to Taipei City Hall. From there, we walked towards our next destination and hurried a bit as the sun is starting to set by 5:30PM. Took advantage and shot pictures of places we passed by on the way.

one side of Taipei City Hall 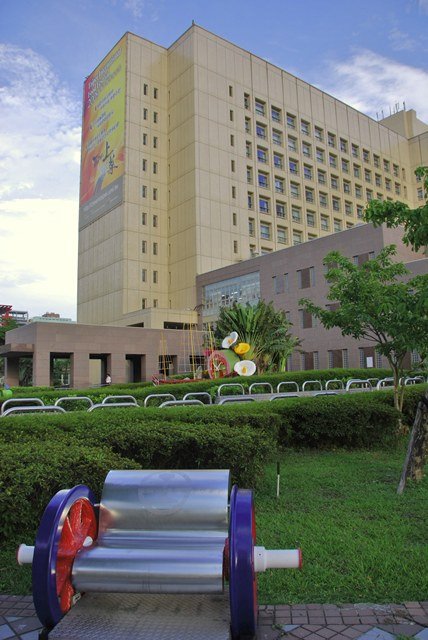 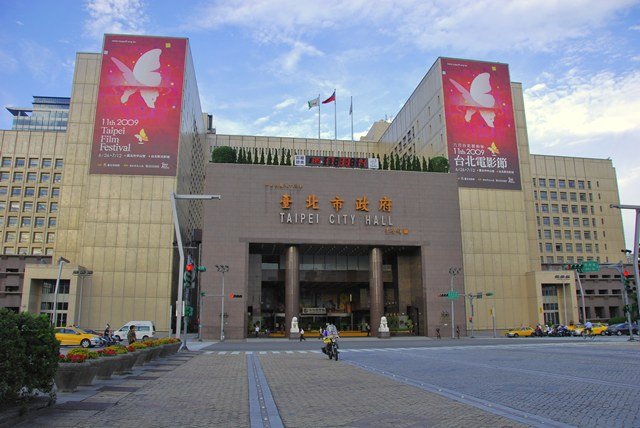 Our destination this time - none other than Taipei 101! This remarkable skyscraper visible from a distance became the world's tallest building since it's completion in 2004. The height was surpassed by Burj Dubai in 2007 but since technically a building is defined as a structure ready for occupancy, the title still belongs Taipei 101 until the latter's expected completion on September 2009. 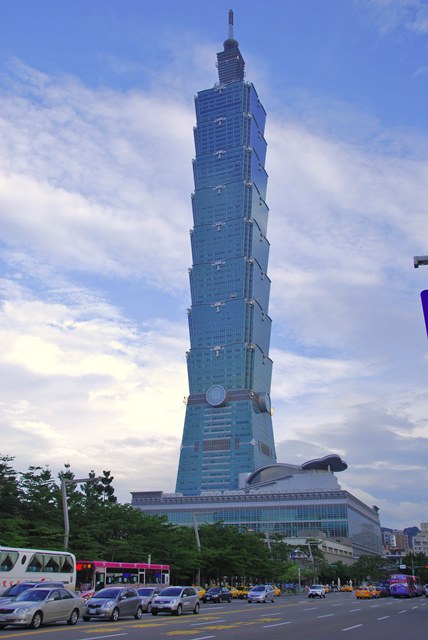 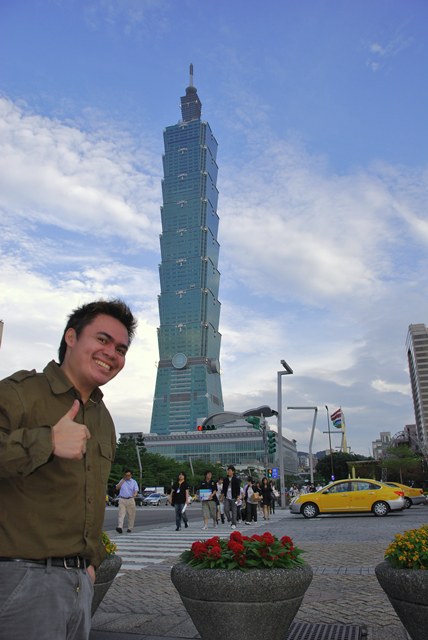 As we approached nearer Taipei 101, I saw a whole bunch of bicycles parked which I find cute and later learned that these are all for rent from YouBike. 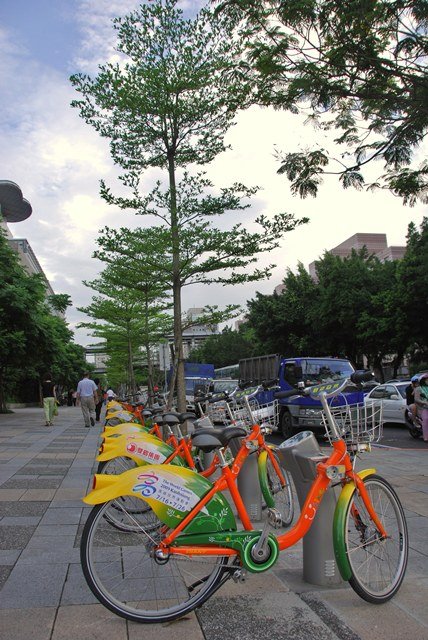 Right across the skyscraper is Taipei World Trade Center. It was the closing date for Display Taiwan. 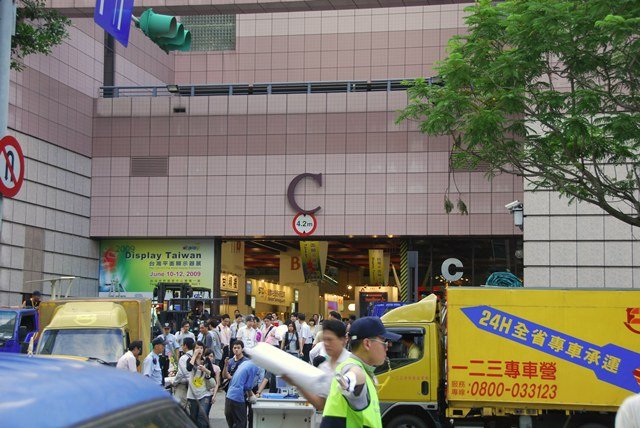 Looking for the entrance to the observatory deck, we found these series of colorful blocks on the pavement. 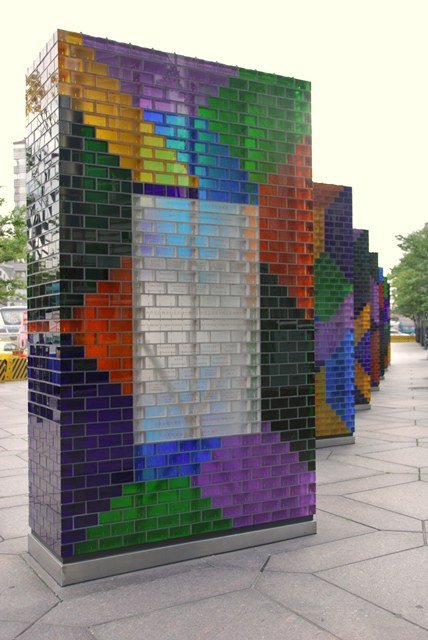 Just after these blocks is the LOVE sculpture, designed by Robert Indiana. I had an encounter with a blue version of this sculpture almost exactly 3 years ago (June 2006) during a family trip in Singapore. That one, however, was already removed from it's location in front of Park Mall in Dhoby Gaut for some reason. 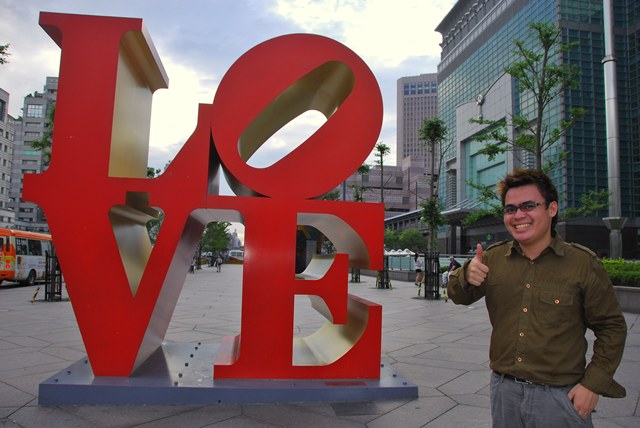 To go up the observatory, you have to go inside the mall and take the lift or escalators to the 5th floor where the ticketing and entrance is located. 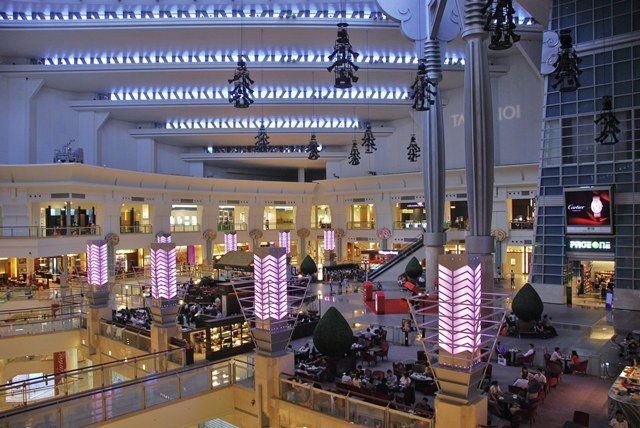 Admission tickets were sold for a hefty NTD400 for regular adult. As a Youth Travel Card holder, something that I got from the airport for free, I got myself a rate of NTD350 (published group rate). Two high-speed elevators serve visitors to the observatory tower and it only takes 37 seconds to reach the 89th floor using the world's fastest elevator as they claimed. 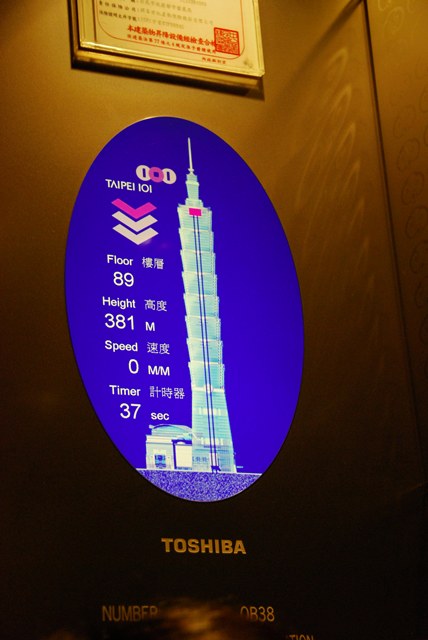 There are two observatories open for public here, an indoor one located in 89th floor is the starting point for most visitors. 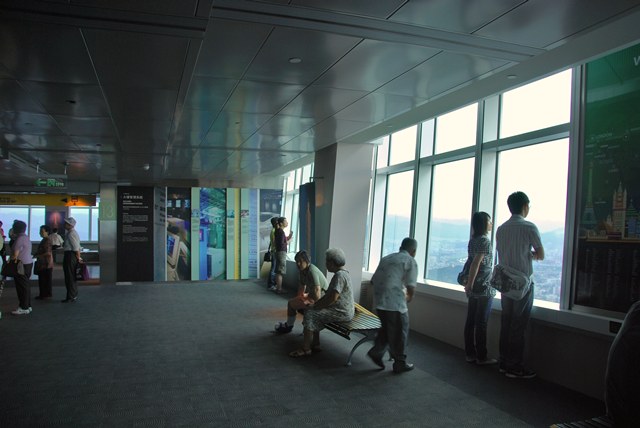 views from the indoor deck 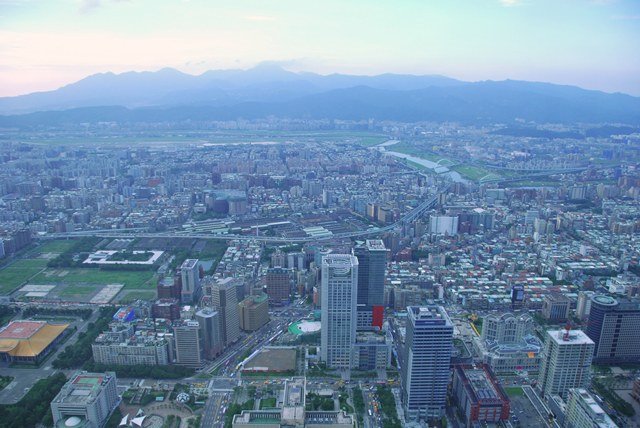 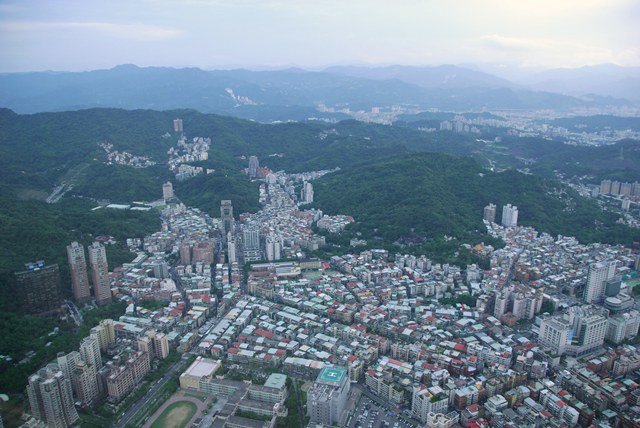 An audio-tour device shaped like a cellphone is available free of use to visitors. You just need to show your tickets so they can mark it off. This has been very helpful in explaining what you see outside the window and what to look out for. 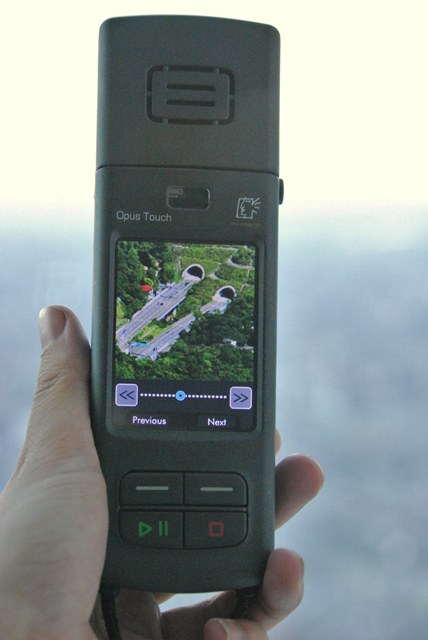 Located on the 91st floor is the outdoor observatory. This is the highest floor an ordinary person may reach as the floors above (up to 105th) are closed to public. 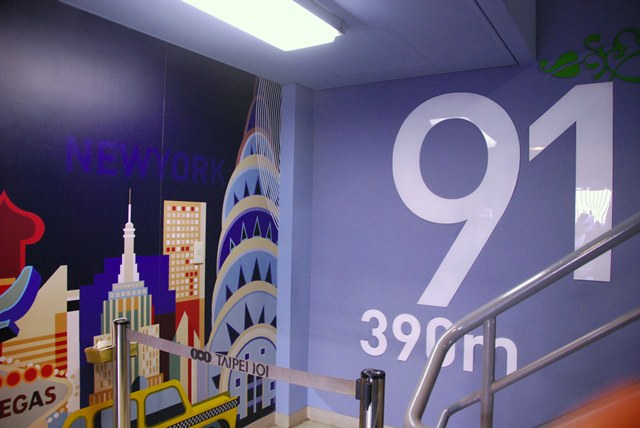 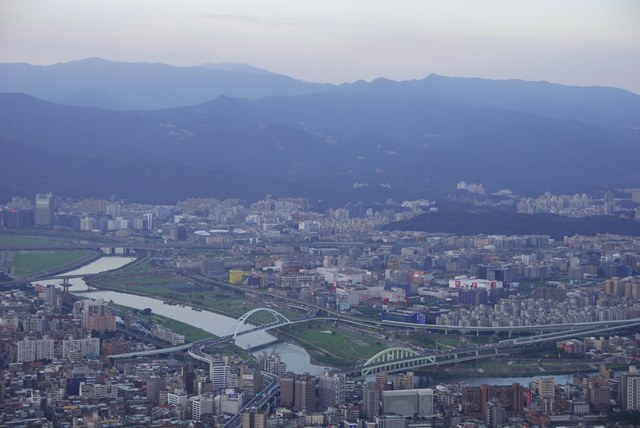 Inside, there is a small theater telling viewers the story of the building, how it was built as well as key occassions and events for the skyscraper. 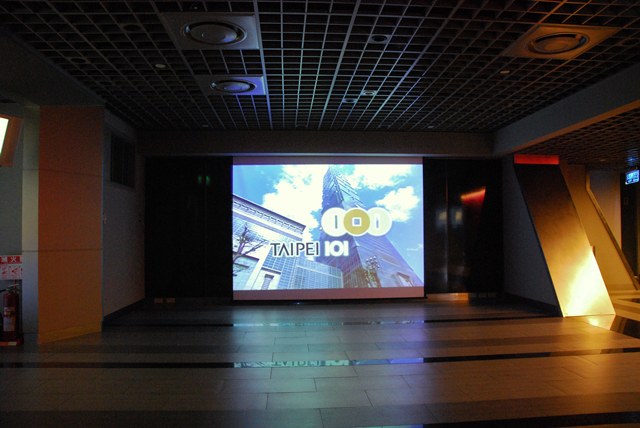 the floor reacts to every step! 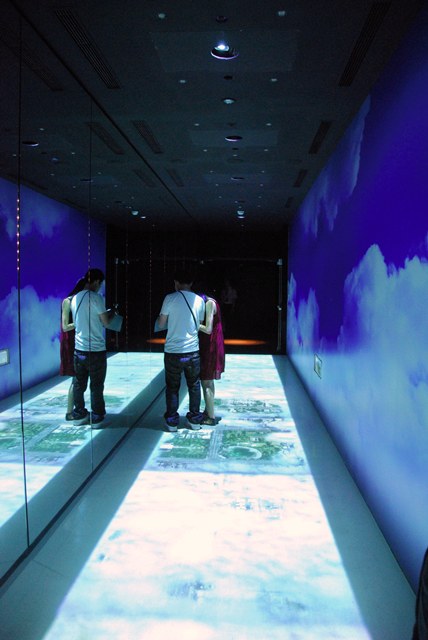 The damper baby, the largest damper sphere in the world, helps the building withstand movements and attacks from nature. 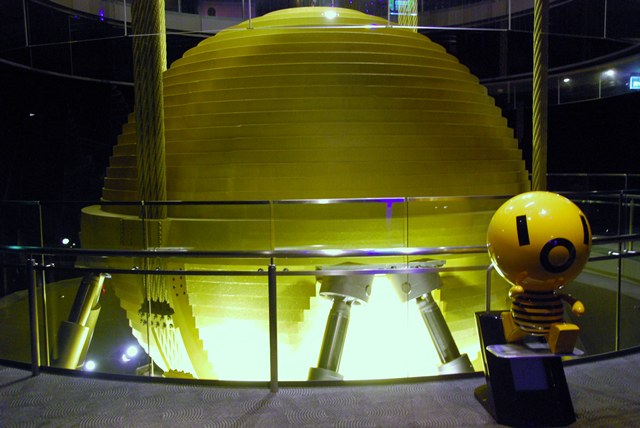 An exhibition display is waiting after the damper and passing through it leads to stores selling jewelries and goodies until you reach the line for the elevator going down. 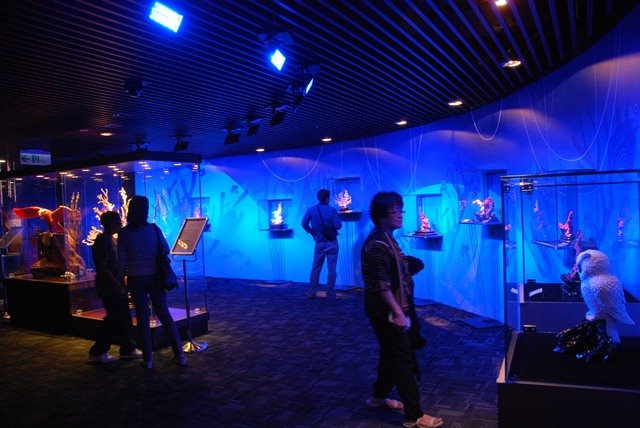 Instead of walking back, we instead lined up for the free service that shuttles back and forth between Taipei City Hall MRT station and Taipei 101.

Our booking for a shuttle back to the hotel was scheduled at by 7:55PM and we still have time to have our dinner in the city. We didn't go far and instead had our dinner at Taipei Milk King, right in front where we should wait for the shuttle. 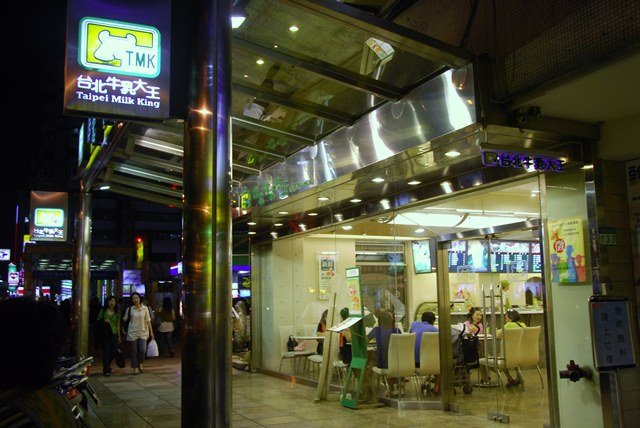 The place was packed but we were lucky to find seats at the basement. My mother had fried pork with rice meal while I ordered Japanese-style salmon fried rice. 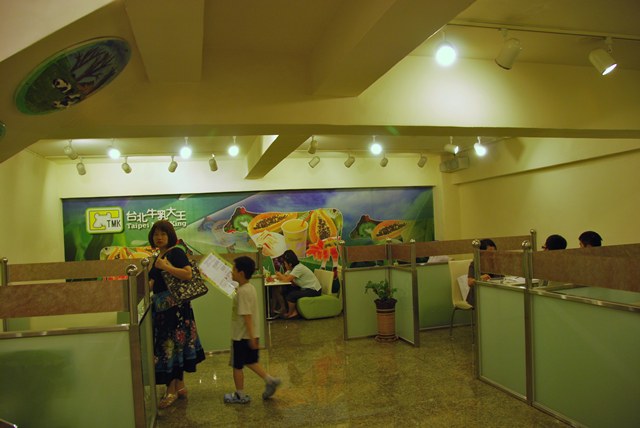 My food! It was yummy and very well presented. I thought it was just rice with few salmon flakes but I there actually are lots of meat hidden underneath. Served with tomatoes and kiwis, it is a complete healthy meal by itself. My mom was surprised either that her meal is more heavy than mine. Together with drinks, everything was paid for only NTD250. Not a bad price for a good hearty meal! 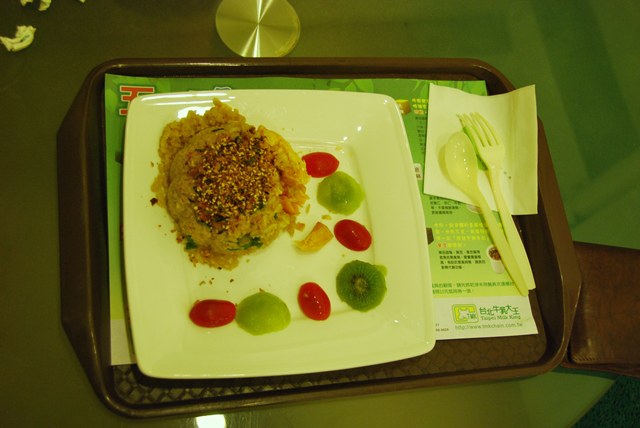 I ordered for watermelon juice while my mom ordered for a lemonade. We had to exchange drinks as she cannot take a lemonade too sour despite mixing a couple of packets of sugar with it. 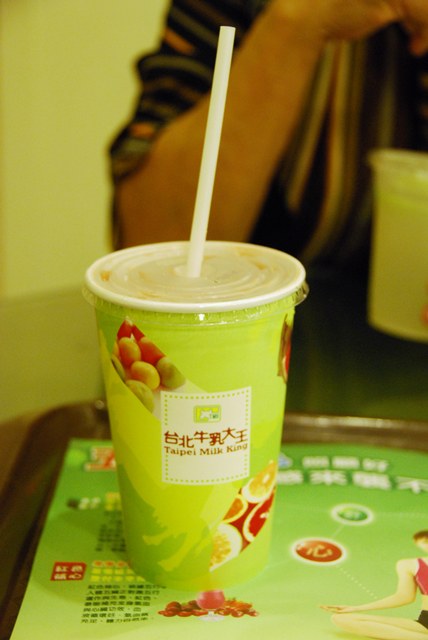 Few minutes before 8:00PM, we waited outside and was picked up by the shuttle that brought us back to the hotel. We got our well-deserved rest that night as we unpack more from our baggage and talk about the things we've done for the day. Because we had to wake up early that morning, we slept earlier than usual to regain energy and prepare for the next day.
Posted by Jasper at Tuesday, June 09, 2009