Philippines celebrates its independence every June 12th of the year and has always been a national public holiday for the country. For some, it is also the last hurrah for a getaway before summer is completely gone and the worse of the rainy season comes in. This year, my mom and I took advantage of an airline promotion offered a couple of months back for non-refundable fares to most of its routes and booked for roundtrip tickets to Taipei covering the long weekend of June 12-14, 2009. After numerous failed trials online and what seemed to be endless waiting in the ticketing office, we got our tickets for around USD45 and adding the mandatory Philippine Travel Tax locals pay amounting to PHP1620, everything was paid for less than PHP4000. The return date of our choice was however not available so we were forced to extend our stay by a couple more days, and I'm glad that we did because we were able to accomplish more. Another thing to note, usually Taiwan requires visitor visa but for residents of of India, Thailand, Vietnam, Indonesia and Philippines, preferrably who are also holders of of an entry visa to or a permanent resident of US, Canada, UK, Japan, Australia and New Zealand may apply for an authorization certificate to enter the country. You will need to show the proof to immigration officials. To apply online or check your qualifications you may visit https://nas.immigration.gov.tw/nase/ctlr?PRO=PRO_Task12Application.

Early morning of this year's independence day, we woke up early and dragged our sleepy selves to the airport to take the airline's only flight for that day enroute to Taipei. Weather has been bad for the past few days with heavy rainshowers and online weather forecasts tell the same about our destination. Since we already booked our tickets and it's non-refundable, there's no turning back. 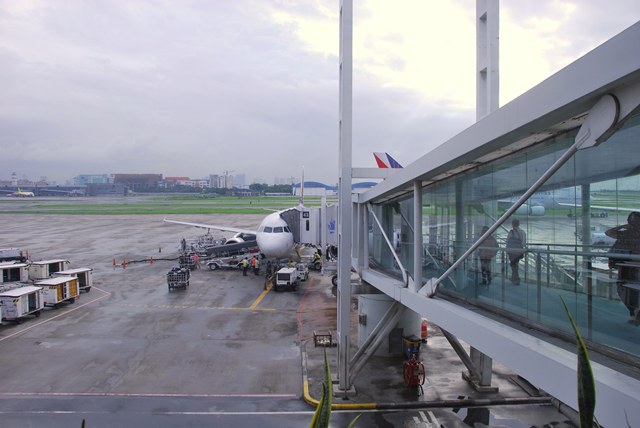 view from the window, above the blue sky 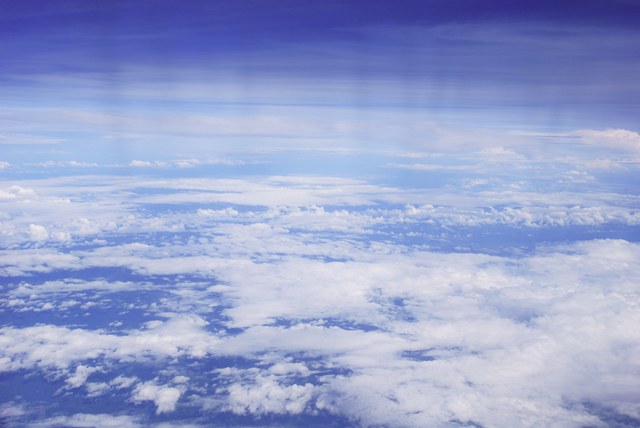 As always, plane food galore! For some reason, I love plane food, especially those served by Philippine Airlines. I believe this is chicken adobo with mushrooms. 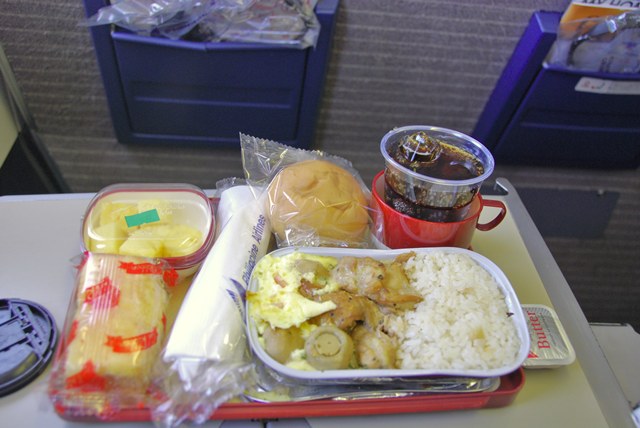 We landed before 10:00AM at Taiwan Taoyuan International Airport. The airport located in Taoyuan City serves as the gateway to Taipei City, an hour away apart from eacy other by land travel. I previously arranged with Mr. Lee who waited for us at the arrival area to pick us up based on a recommendation because it is more convenient and economical as he charged us only NTD900. It would have costed us NTD1200 for a cab ride from the airport to our hotel located in an area just outside the capital city. Guests staying in hotels in Taipei City, especially those near Taipei Main Station enjoy buses that goes back and forth between airport and the city center, but for us this is not an option. 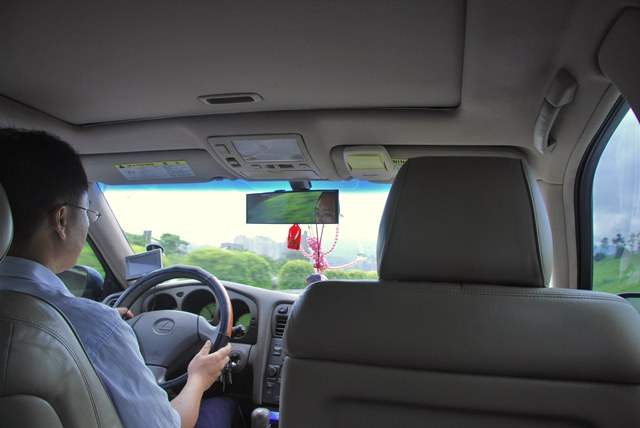 Our hotel, Holiday Inn East Taipei, is located in Shenkeng township of Taipei County, around 15-minutes to Taipei 101, Taipei City Hall MRT station or Grand Hyatt Hotel via the free scheduled shuttle service provided by the hotel, as shown here parked on the driveway. You need to book early for the shuttle service however because it can only accomodate up to 10 guests at a time. The same shuttle also picks up guests from Taipei 101, Taipei City Hall MRT station or Grand Hyatt Hotel on scheduled times. During weekends, additional routes to nearby Shenkeng Old Street and Taipei Zoo is also available. You may be wondering why I chose this place. Ordinary rooms in hotels of the same class may cost double to what this hotel have charged us for a package rate that includes breakfast. Since I was with my mom and I want things to be more relaxed and less stress, the idea won me over after weeks of weighing and thinking. 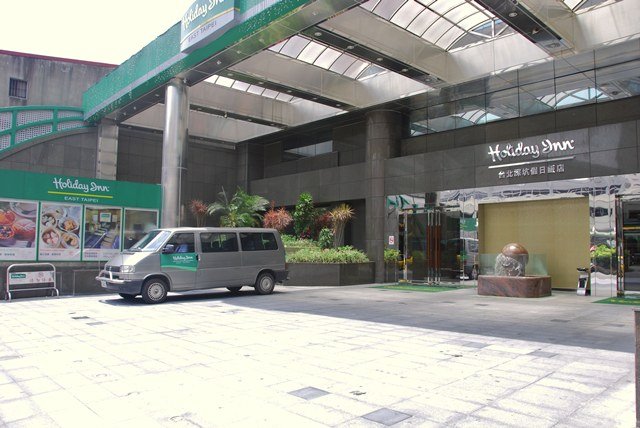 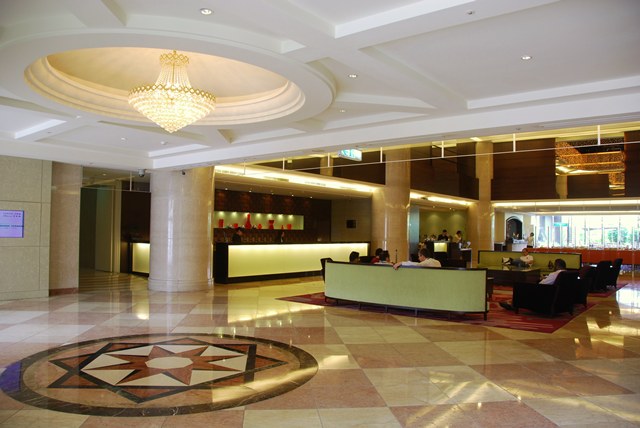 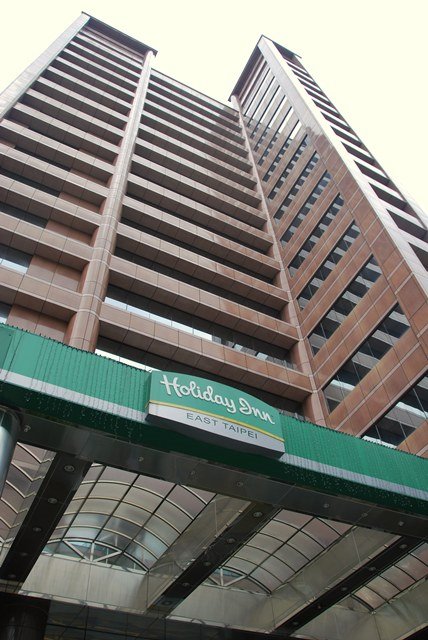 Specifically, I always request for a high-floor with a nice view when I reserve rooms online. We were given a room on the highest floor just below club level rooms. I only booked for deluxe rooms so I didn't expect to be higher. I was surprised to see the room to be bigger than what I initially thought. 36 square meters might not be gigantic but I find the room spacious and bigger than usual, perhaps because of how they have designed and arranged things. This was my first time to stay in an Intercontinental Hotels Group abroad because I always prefer to be in a Marriott chain or Starwood hotel if possible. 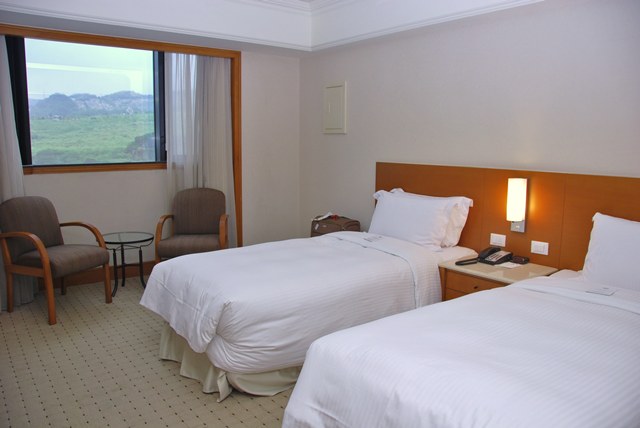 An LCD TV with a decent selection of local and international channels is mounted on the wall. The working area and table nearby is marbletop. 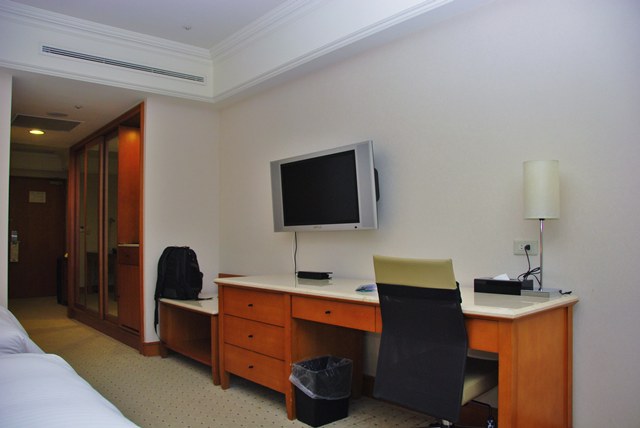 Upon entering the room, a huge space where another working desk is placed. I saw reviews online that dislike this setup because they had a feeling of having to enter a doctor's clinic and the table adds up to that by serving like the reception area. I personally like the concept because virtually, I had an own area for myself to plug my computer, connect with friends, surf online and work while I'm away. Free wi-fi internet access was also provided in-room. 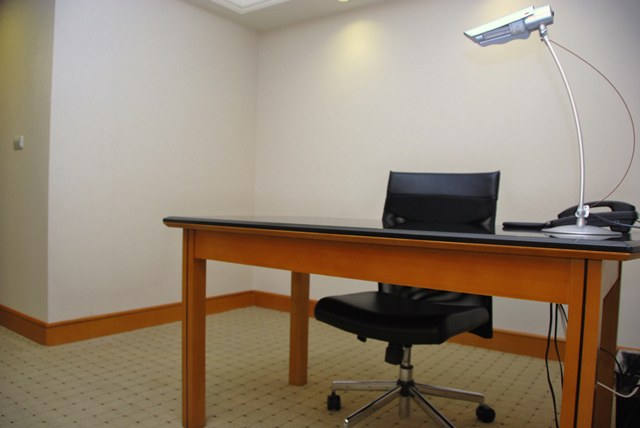 This is the view from the window. Considering that there really is nothing much around, I'm glad that we got this side with views of the nearby river, highways and the mountain. 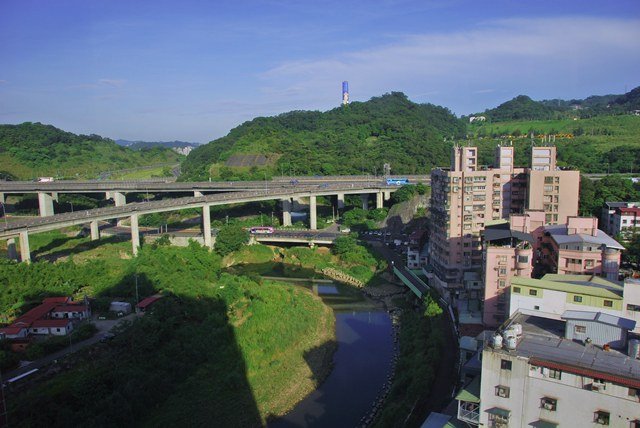 From afar, a very distinctive blue structure is towering above the green trees. Zooming-in my camera, finding a cute picture of a giraffe is puzzling and kept me wondering what's there. Initially I thought it was a cow when I wasn't wearing glassed and it could have been a dairy factory and I really was surprised to find out it is actually an incinerator facility - the Muzha Refuse Incineration Plant! 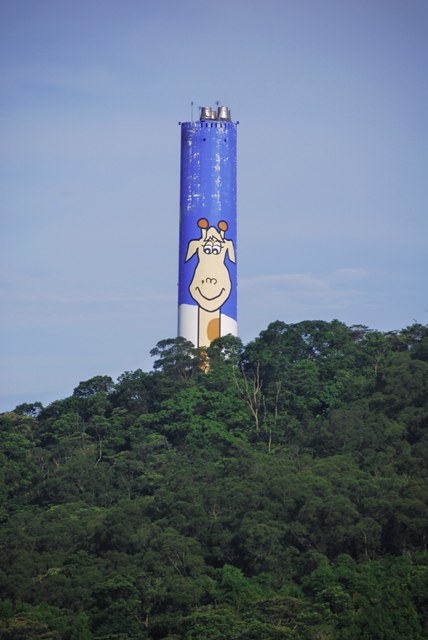 Over the next hour, we just stayed and relaxed in the room as we unpack some of our things. During check-in, I booked seats for the 12:30PM shuttle to Taipei City Hall MRT station by and our first agenda in the city was to find a place to eat. Our goal however is not to eat in any other restaurant - we were looking for this specific restaurant where a scene of Meteor Garden was once shot. My mom was (or maybe still is) a fan of Meteor Garden years back and I suggested to eat in that iconic place just for the experience. The shuttle dropped us off as expected in the train station and armed with our tokens (NTD35 each) we stormed to Shipai from Taipei City Hall, changing trains in Taipei Main Station. 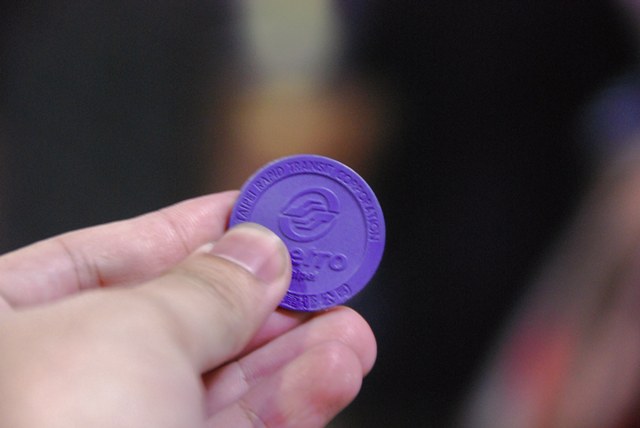 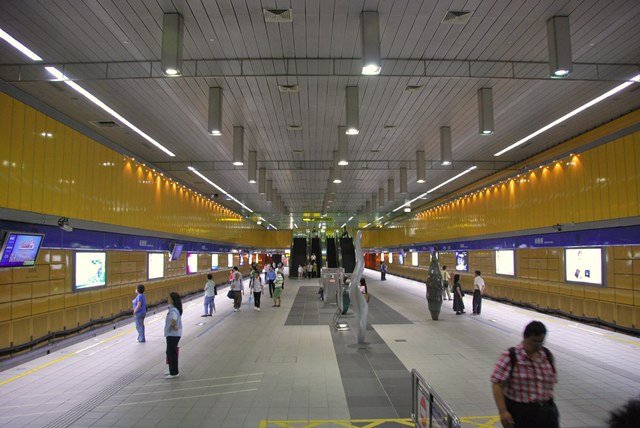 About 30 minutes later, we arrived in Shipai MRT station. With the help of the vicinity map pasted on the train station and researched information on which bus route we need to take that will take us there, we stood and waited for almost half an hour until an R19 bus pulled over. 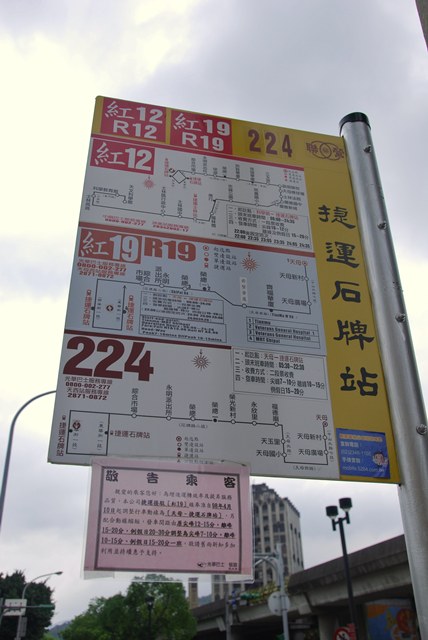 The R19 bus (red line). Bus fare is NTD35 per passenger but since we do not have exact change, we just paid NTD100 for it is the smallest change I got at the time and wanted to avoid communication problem as I do not speak Mandarin. 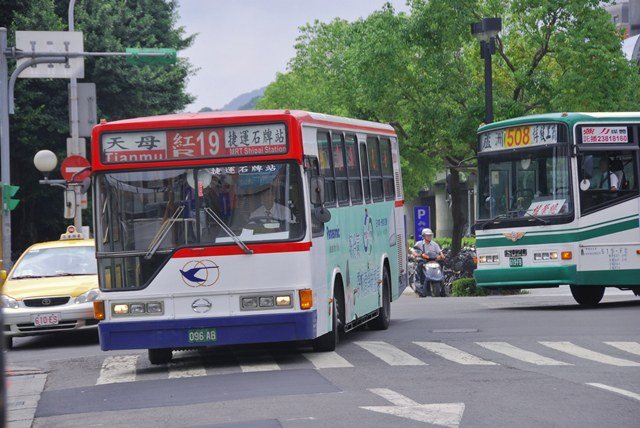 15 minutes later and we reached the end of the route in Tianmu. We walked back a bit as we saw that we went past the place a couple hundred meters away. Finally reached the place past 2:00PM and I was surely hungry by then. The place is called P.S. Bu Bu, a car-themed diner restaurant serving fusion dishes. 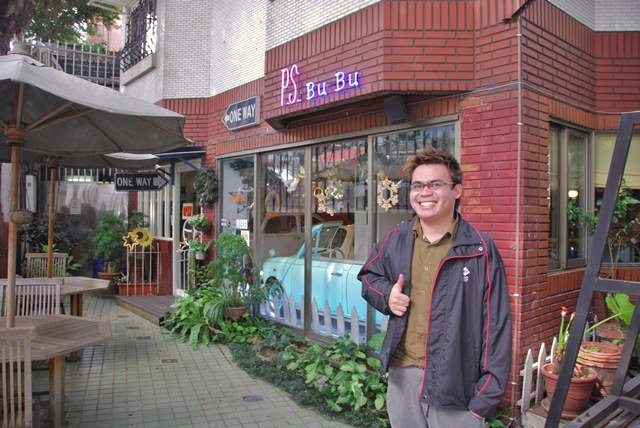 The place is well decorated with old automobile and road memorabilia. Even the area where all the preparation and cooking are done is covered by a car facade. 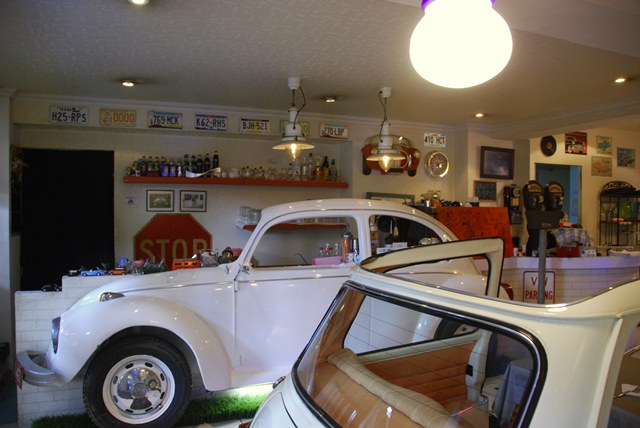 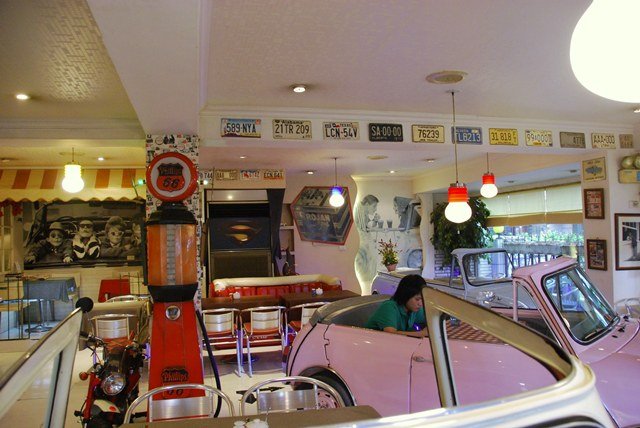 My mom and I were seated in this half green car situated by the window. It sure was nice to sit from here and feel the coziness and childish appeal of the place. 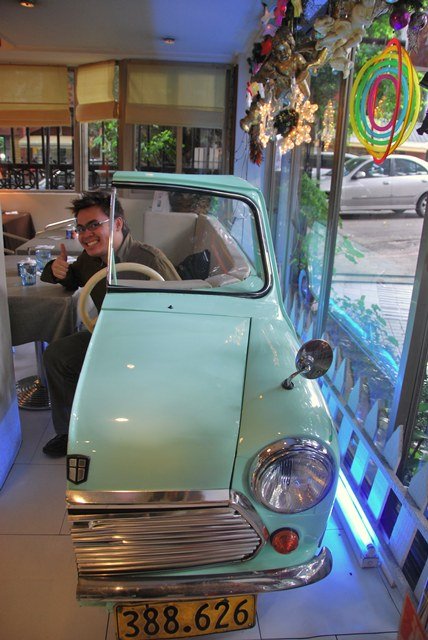 There is only one whole car inside and this is the same car where the famous Taiwanese show scene was shot. Unfortunately someone got in before us so we didn't manage to get the table. 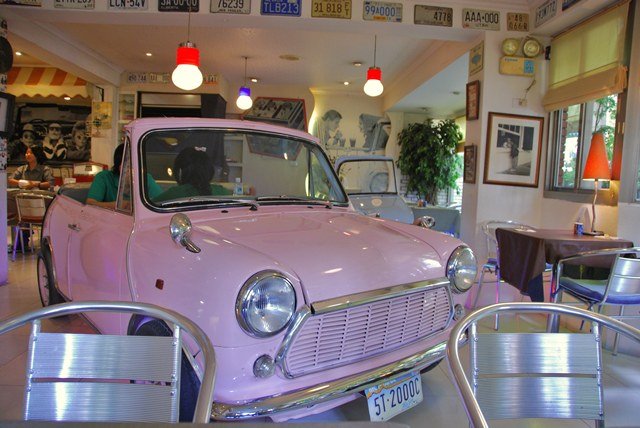 During peak times, diners have to call in advance to eat here. If you expect to be seated in the famous pink car, more so that you have to arrange for it earlier. There also may be a minimum charge per person eating here.

I had a pasta with shrimp in chili garlic sauce and chocolate milkshake while my mom had another variety of pasta, i think with thai sauce. At first, I was dismayed when I saw the menu since it was a bit pricey (NTD280 each order) and seems ordinary but I was surprised when I tasted my order! I never had pasta like this ever and was very happy with my order. My mom loved her pasta as well. Good thing we didn't have to convince ourselves that it was worth going all the way here. 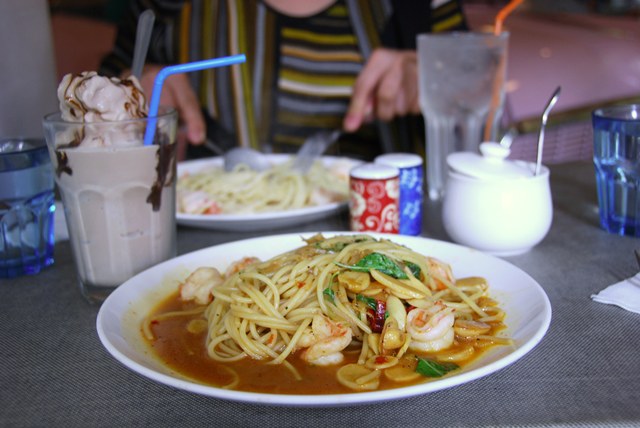 By the time we finished our late lunch, we still got a lot of time ahead of us to burn and since it was our first day in Taiwan, our spirits are up and we are very eager and excited to explore more of what Taipei has to offer until sun comes down.
Posted by Jasper at Sunday, June 07, 2009

Jasper! Did you see Barbie Xu and Jerry Yan? haha! Okok.. $45 for a roundtrip to Taipei is VERY Cheap. But you know what? It only takes 45 minutes from Manila/Clark to Taipei right? So I guess the $45 fee is just right. Finally, airlines are no longer over-charging passengers.

Also, you love Philippine Airlines food? Ok, I respect your opinion but I personally think that their food taste bad, like they just recycled and recovered them for the next batch of passengers.

I really love the food served by Japan Airlines and China Airlines. Here in America, they don't serve complimentary snack and dinner (NONE)... so fragan' expensive when you order it on board.

Asia is the BEST!

@bridge - oh! if you're comparing it with JAL, definitely i like JAL food. NW/DL food however doesn't entice me at all, and most of the time i still feel hungry after. PR doesn't serve meals or heavy snacks to domestic routes here either, only peanuts and crackers at most nowadays. actual flight cruising time is a little more than an hour but published flight duration is 2 hours

So, you've been to Taipei. I bet you had fun there just like us. How come, I didn't know P.S. Bu Bu. :( I should visit this resto next time.

love the giraffe head out of the trees! and the old cars (look, there's even a pink 1-how cute)! :D