Our fourth day in Taiwan was well spent within Taipei City. It was a free day for me and my mom and we haven't planned or arranged to go anywhere so we opted for the "come what may" scheme. We woke up later than usual and had breakfast before 9:00AM. Booked for the 9:10AM free shuttle service from the hotel and was dropped off in Taipei City Hall MRT station.

Heading towards the city, cars and people seems denser because it was a Monday morning and somewhere before we got dropped off, we passed by an "edited version" of the Statue of Liberty by Mine All Malt Beer. 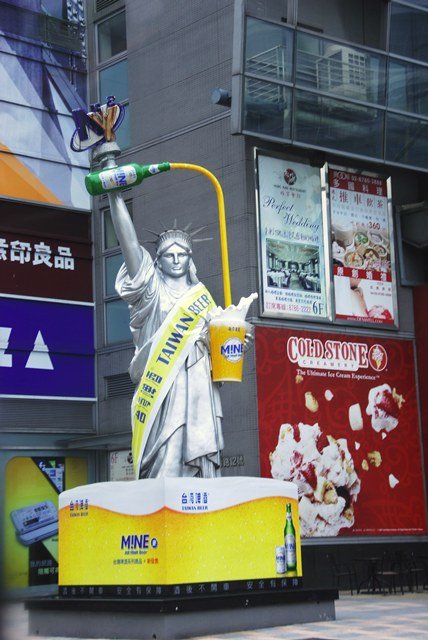 A short ride (1 stop, NTD20) away from Taipei City Hall MRT station is the National Dr. Sun Yat-sen Memorial Hall, a monument to the founding father of the Republic of Taiwan. An MRT station of the same namesake makes the place very accessible to commuters and is a short walk away from its back entrance.

a monument of Dr. Sun Yat-sen in the park 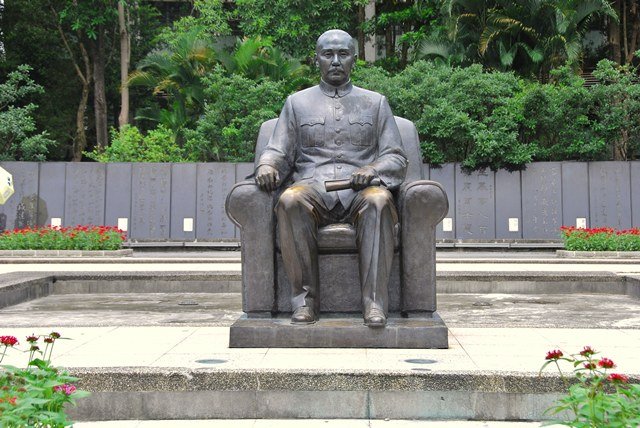 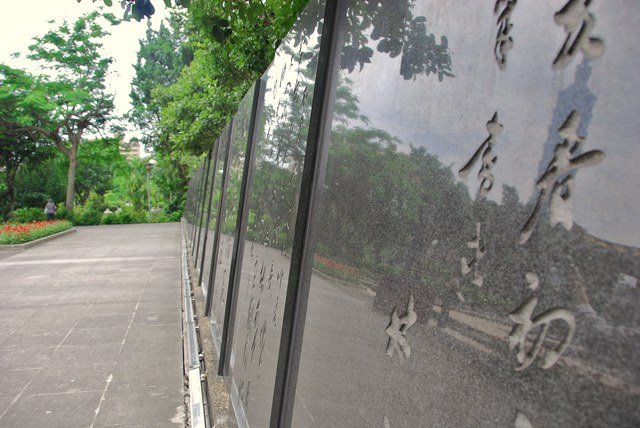 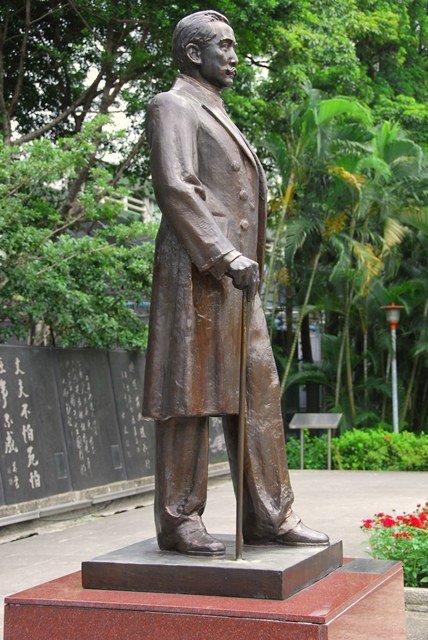 A few people were visiting the park on that gloomy Monday morning and I was happy to see an old man running around for some reason, and later I understood that he had a kite tucked somewhere and he was trying to have it flown. 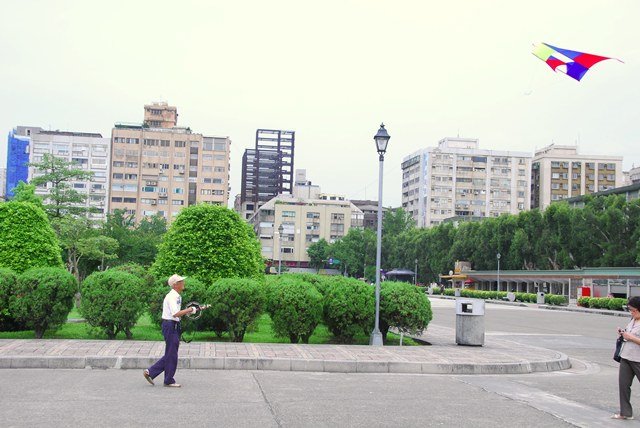 Across the main building is a huge landscape of plants and flower and it was a very colorful and beautiful sight! 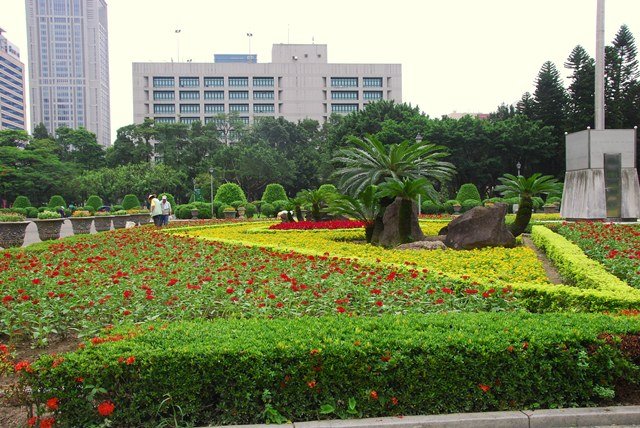 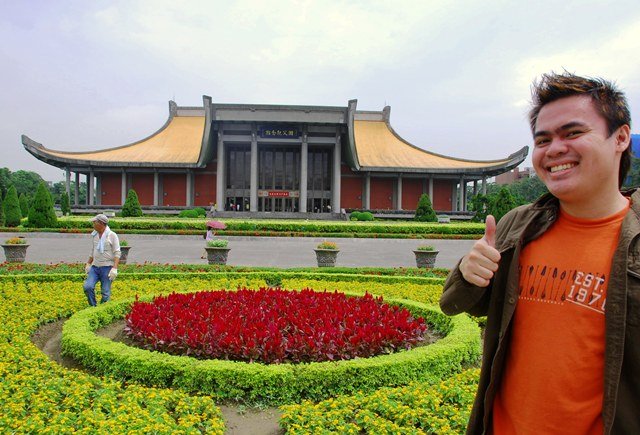 The plants are well kept and trimmed by gardeners, and they do keep it beautiful all-year-round. 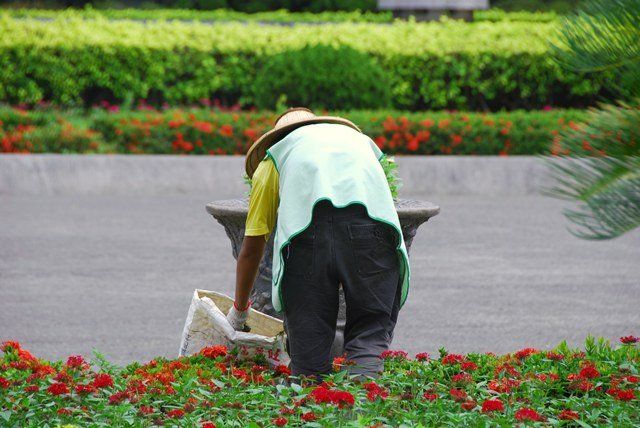 As we head inside the main building of the memorial hall, we saw a bunch of people flocking together. Looking closer, we were lucky to witness the 10:00AM change of guard that morning. 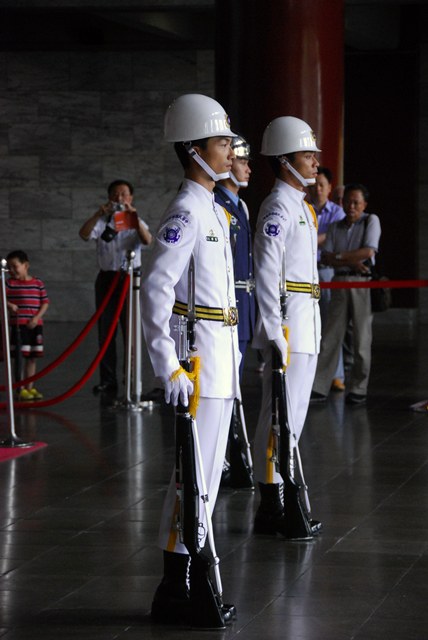 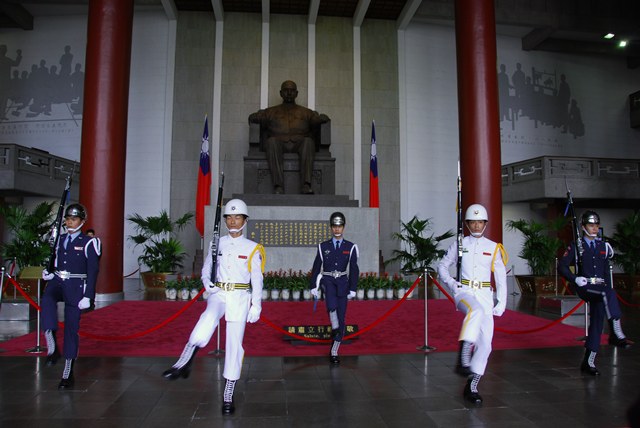 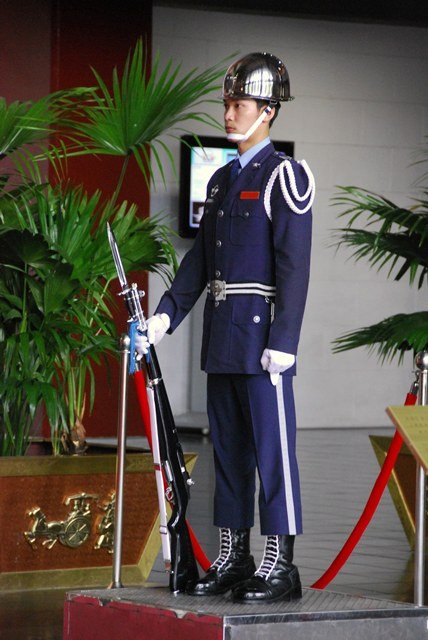 me, in front of the bronze statue of Dr. Sun Yat-sen inside the memorial hall 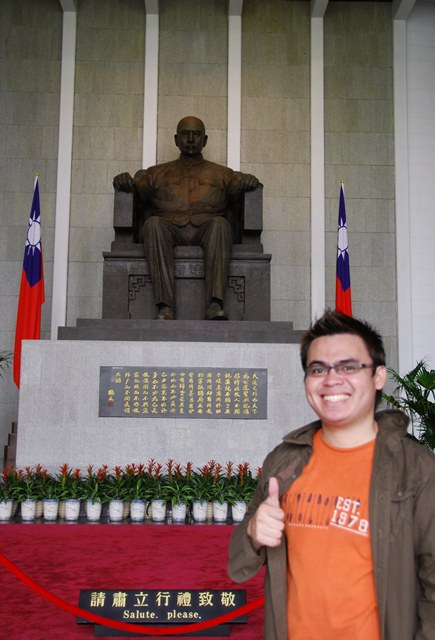 On the left side of the bronze monument is the East Dr. Sun Yat-sen History Exhibition Room containing articles, stories and timeline of his achievements and legacy. 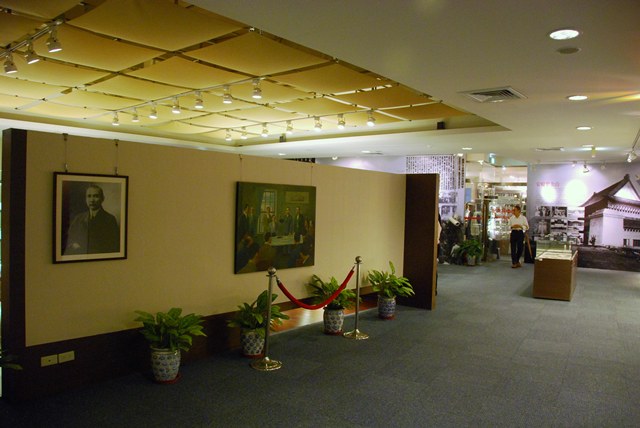 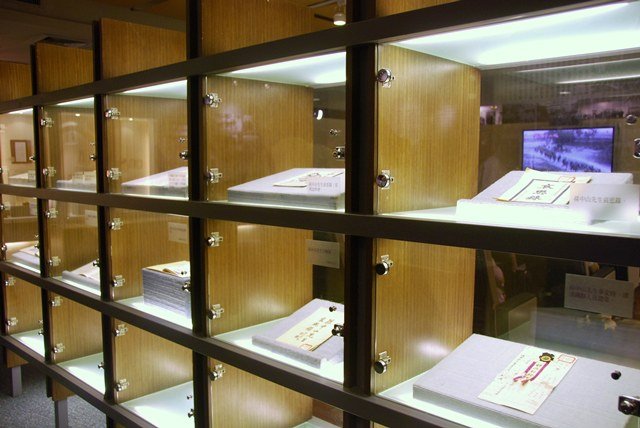 The whole place have other facilities like theater, galleries and a library. We didn't have much time to do everything and we didn't really understand much of what's displayed in front of us so we headed back to the MRT station after buying a few card souvenirs from the gift shop. As we exit the gate, we saw this stone pathway and noticed a barefooted person stepping on it. 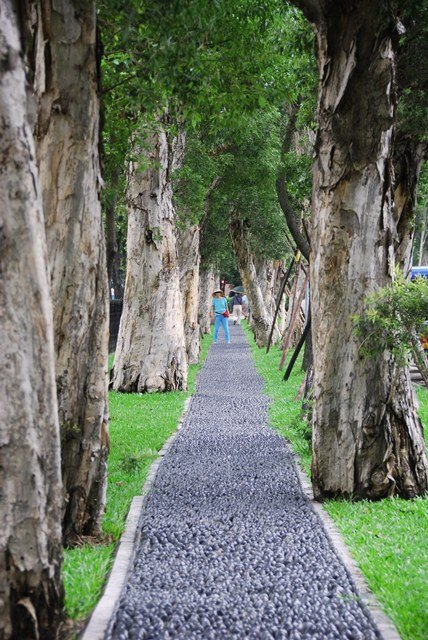 On the side, we realized it's like a healthy exercise path and tried a bit of it, but didn't feel good as the stones were hot. 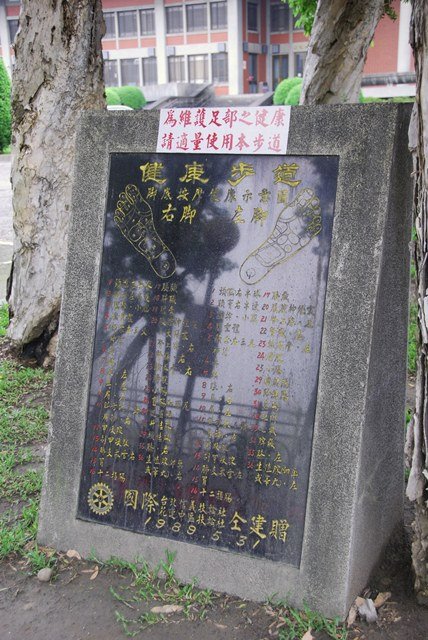 From the memorial hall, we then rode the MRT again on the way to Ximen MRT station (NTD25). We planned to check out some shops and do a bit of shopping here, but we noticed on the map that the Presidential Office Building is just nearby, so we decided to check it out, walked towards it and saw a number of what seemed to be important people riding their individual cars and left successively. 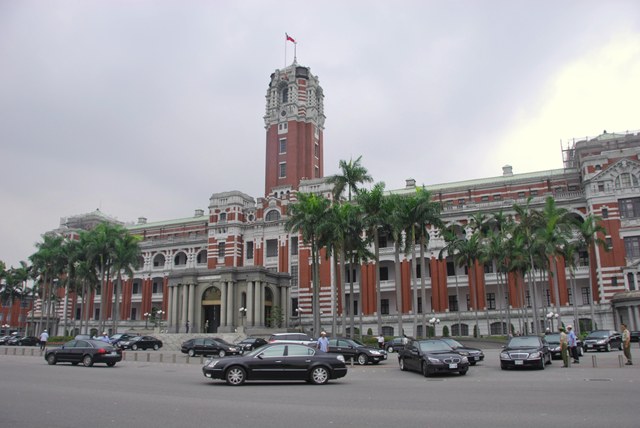 sideview of the Presidential Office Building 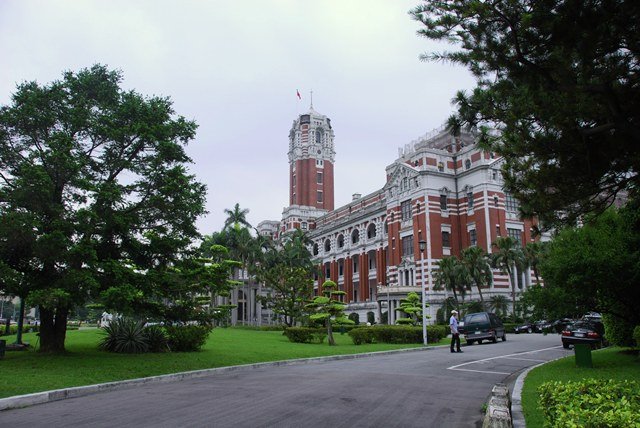 Going back to Ximending, we decided to have lunch on a special place I saw over the internet, but since it was still early, we looked for something else to do and saw a number of signs that leads to Zhongshan Hall. My initial thought was it must be something important so we decided to follow the trail, look for the hall, and we ended up to see this small building and the back part of it was still under construction. 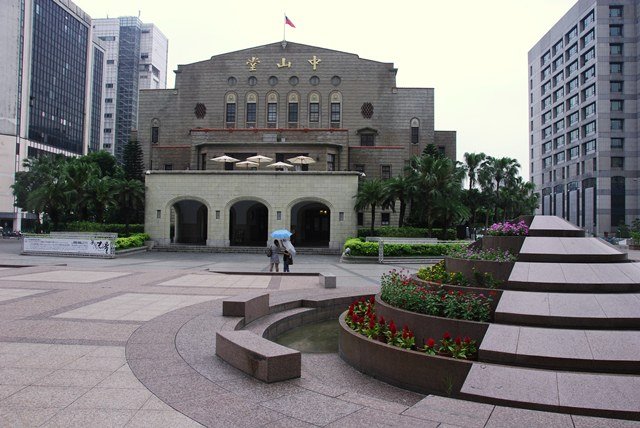 Further research later on revealed to me that this building was previously the city hall of Taipei and is now functioning as the official meeting place of government officials.

stone marker in front of the hall 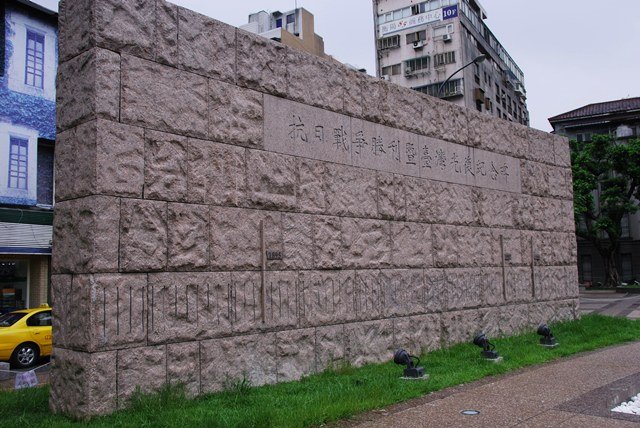 Taipei City by itself have lots of important historical and exiting architecture to see and we didn't even need to be on a guided tour to do this! Much more will be unravelled as we continue our exploration that day but for now, we're off to lunch!
Posted by Jasper at Saturday, June 27, 2009