Hanging around Singapore with friends

Sunday. Our plan is to hear mass at the nearby St. Joseph's Church in Victoria Street. Four or five blocks away from our hotel in Bencoolen Street, we arrived minutes before the ceremony has started. 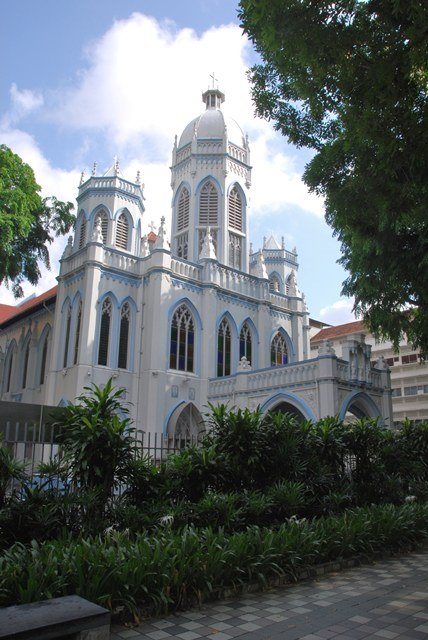 I expected the place to be at least half-full but to my surprise, the place was almost empty. My family heard mass the last time we were in Singapore at the Church of the Sacred Heart in Tank Road and that gave me the impression that mass-goers were very serious and timid here. 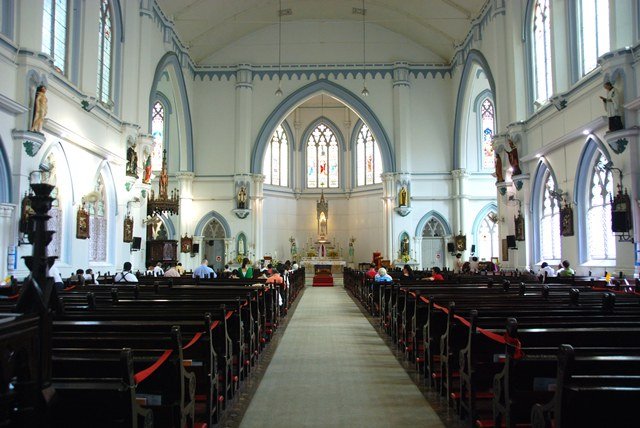 Today, we planned to meet with our friend Eugene at the Bugis MRT station after a failed encounter the previous day. Meeting time is still an hour away so we paced our walking to be slower while browsing in the shops and sights on the way. I am also meeting a classmate in college an hour later at the same station.

We came across and saw Manila Street, a surprise that made us have our cameras clicking for some shots. 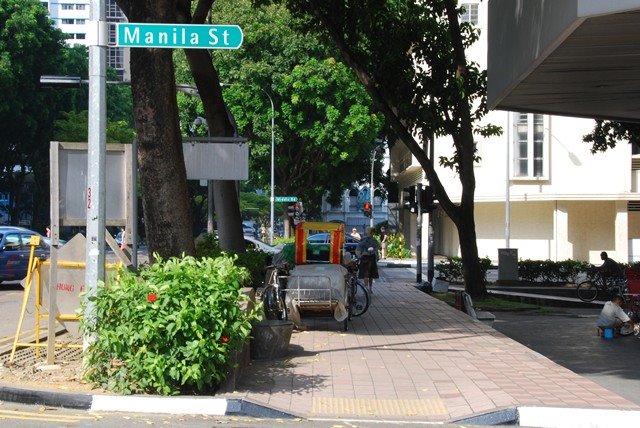 A couple of blocks more and we reached Bugis District. This is Bugis Street and their slogan proudly acclaims that it is "The Largest Street Shopping Location in Singapore". 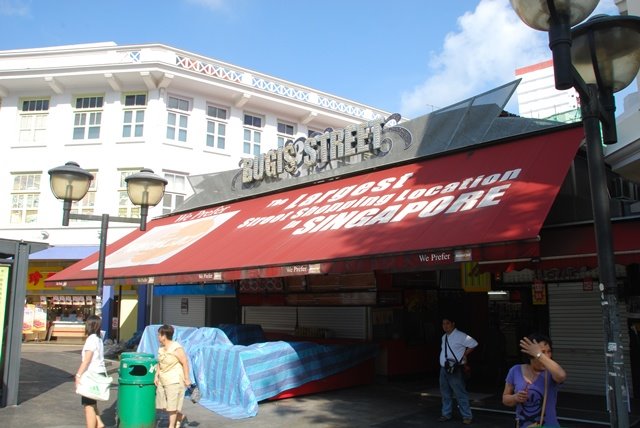 The place is actually an open-air market where a number of stalls and shops are lined up, similar to the ones in our local Greenhills Shopping Center. It was too early though when we were there and so most of the shops were still closed. 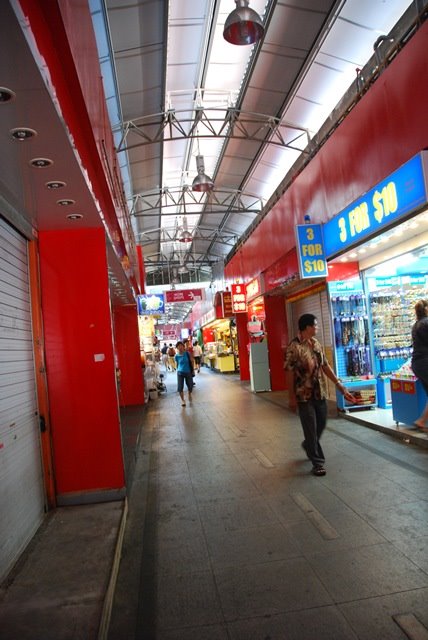 Walking towards past the other side of Bugis Street and outside heading to the Bugis MRT station, I saw these multitude of colorful buildings and stairs and I can't help but take a shot of it. I didn't get the name of this place nor the buildings however which is just behind Bugis Village. 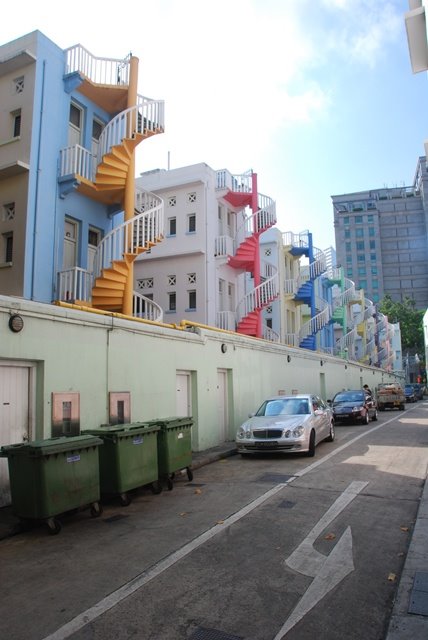 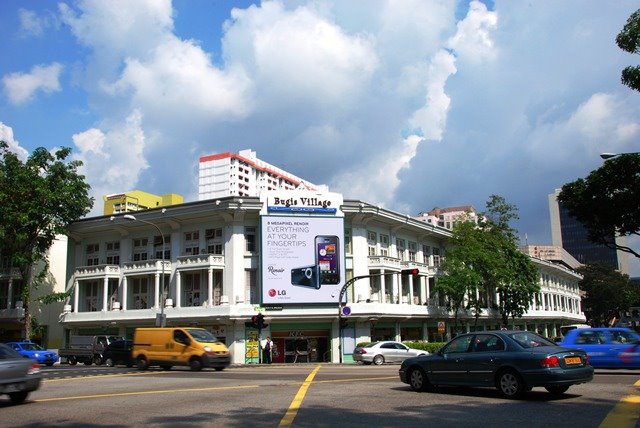 Minutes has past and we finally have met our friend and my classmate. We decided to have lunch at the foodcourt in a nearby mall called Bugis Junction. 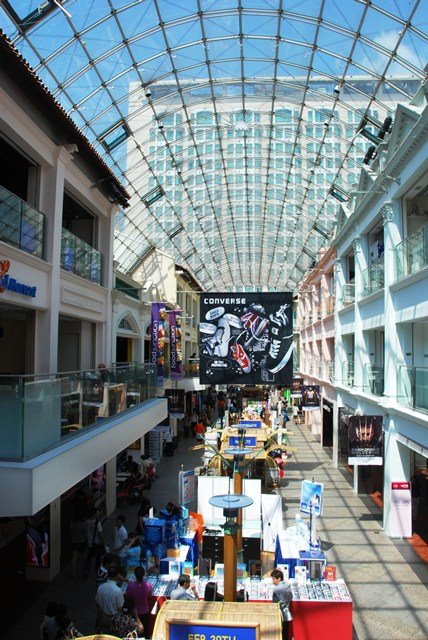 One thing that I noticed among foodcourts in Singapore - food stalls are separate from those that sell drinks. I'm not sure if it is efficient or not but at least if you just there for a drink, you need not fall into a long line just to have your thirst quenched. 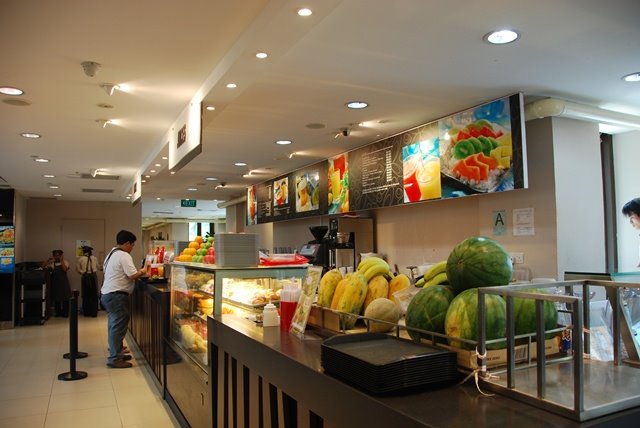 This is where I bought my food - Original Delights. I had sauteed beef rice topping served with egg (not sure of its name) and it was fantastic! So far I'm loving the food I've ate in the city. 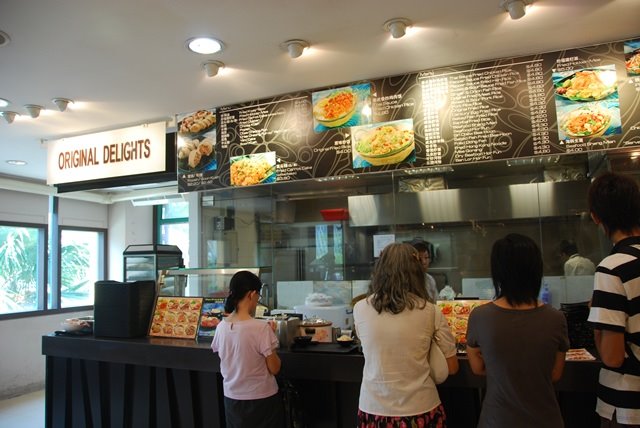 my food and drink 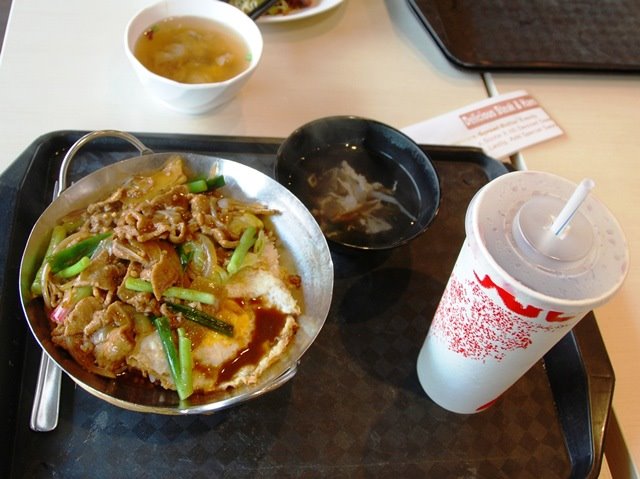 After lunch, we decided to check out the "Disneyland of Geeks" in Singapore - Sim Lim Square. The place is actually 10 minutes walk from Bugis Junction, very near our hotel and towards the mall, we passed by the flea market. This time, a lot of stalls were already setted up and a number of weekend shoppers were there. 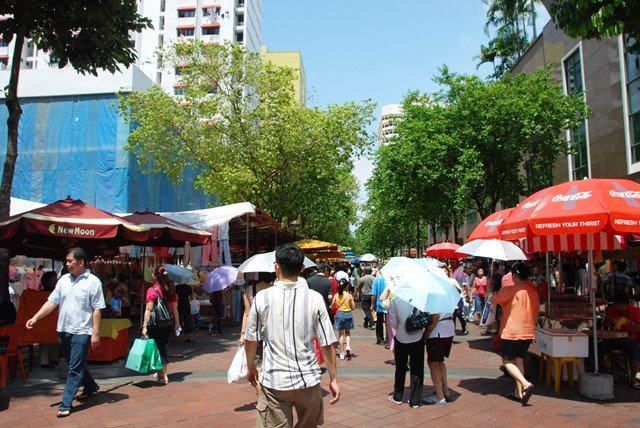 You would think Sim Lim Square is your typical electronics mall and that might be correct, except that this place has six storeys of numerous stores and for a first timer (good thing I have been here before), the place can be confusing. Selling gadgets from DVD players to video recorders, laptops to cellphones and almost any geek gadget you can ever think of, the place is really heaven for the tech savvy crowd. A huge temple-shaped jade carving was display on on our way inside. 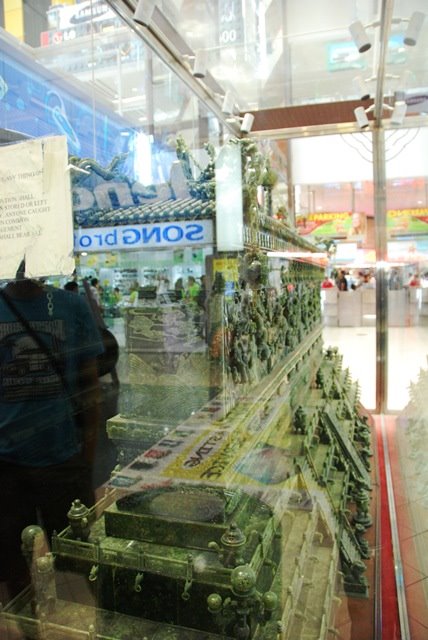 After window-shopping a bit in Sim Lim Square, we proceeded to La Salle College of the Arts, a recommendation of Eugene, to take photos of the place. Only 5 minutes away by foot, the buildings of the said college, although queer and a bit weird, for me are very artistic, futuristic and beautiful. 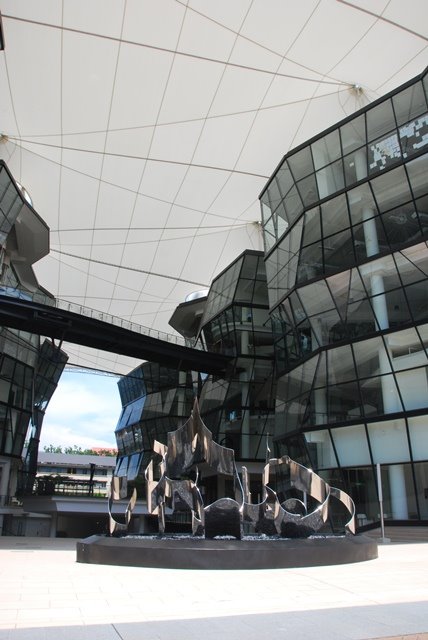 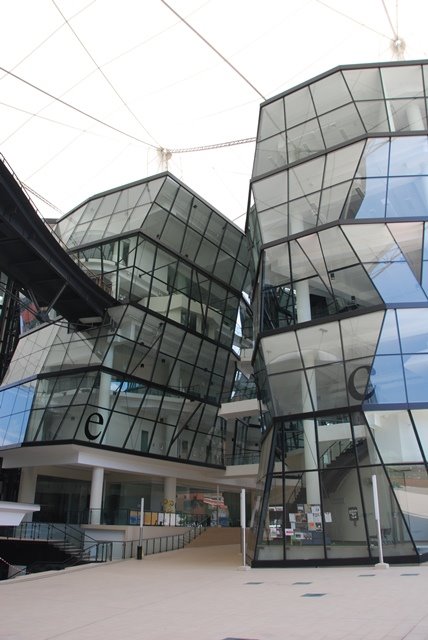 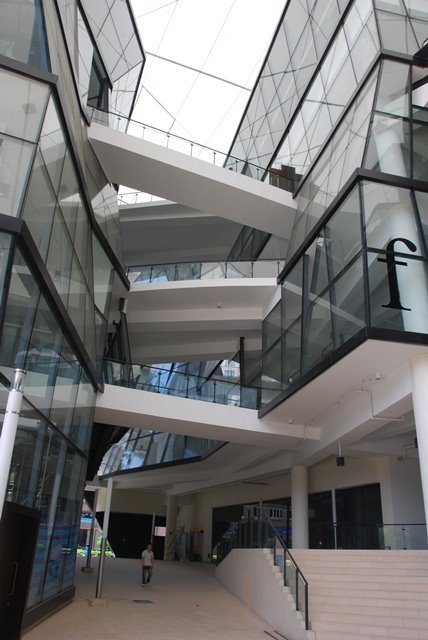 me and my college classmate gretch 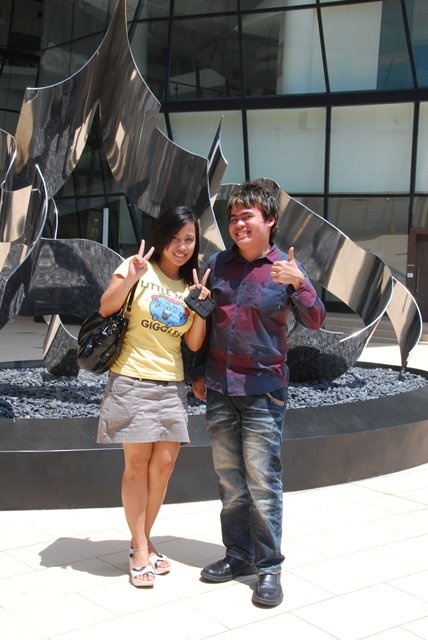 We parted ways with my college friend and proceeded to check-out from our hotel, a 10-minute walk away from La Salle. 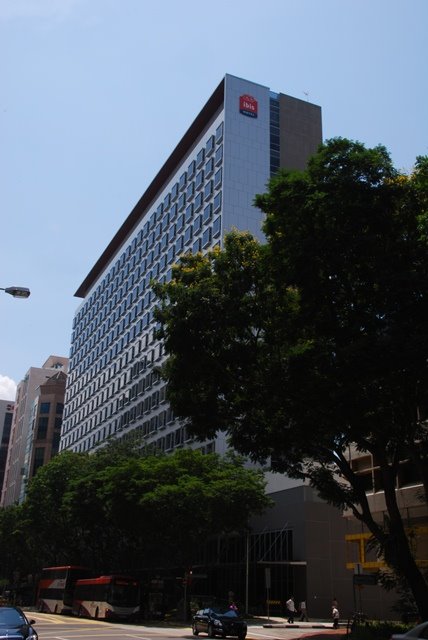 Another recommendation of Eugene after checking-out was to stay in a park nearby Singapore Management University, just relax and take photos. 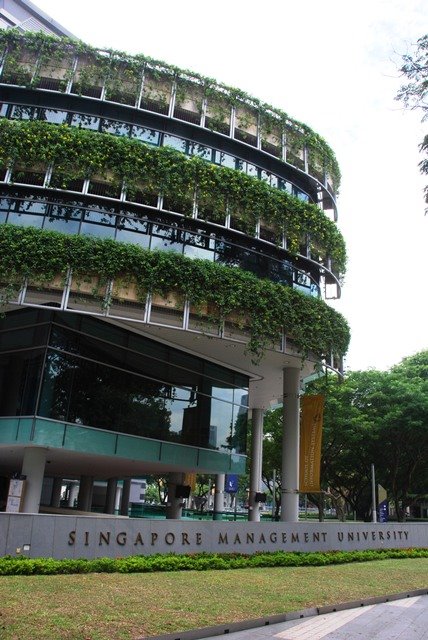 The university is just across another known landmark in the city - the National Museum of Singapore. 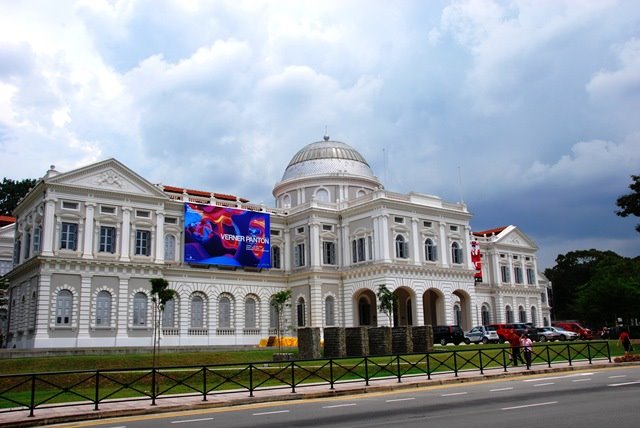 chester, eugene and me 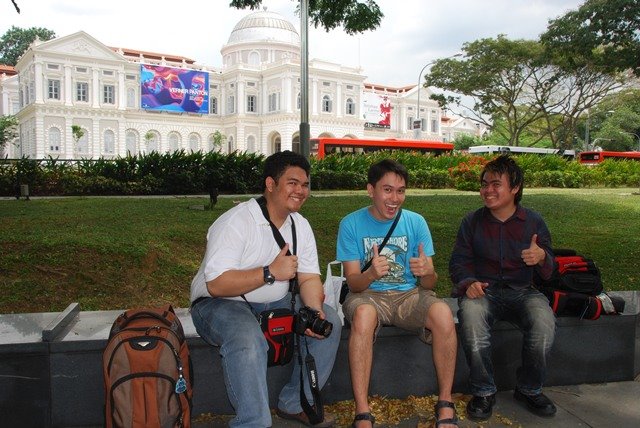 After a few chitchats and catching up stories, it was finally time to say goodbye. Eugene brought us to Dhoby Gaut MRT station because Chester and I planned to visit another spot in the city and on our way, we saw this group of Porsche car drivers smoothing around the streets. I got a chance to take a photo of one waiting for a stop light's green signal. 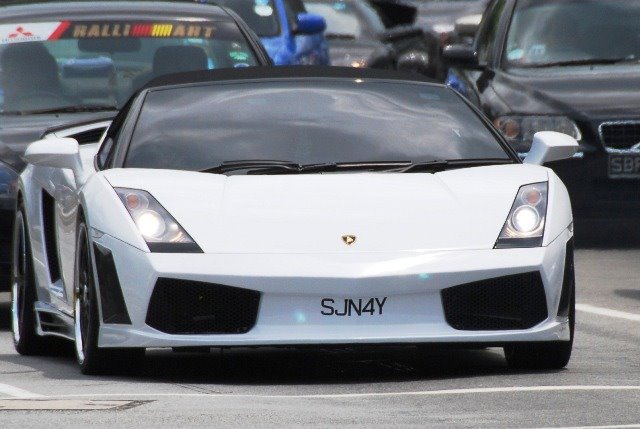 As you may have noticed, we scheduled this day to be more relaxed and loose compared to what we did the day before. We are leaving the city that very same night but there are still a couple of things we planned to do before jetting off and those are what I'll be posting next on this blog.
Posted by Jasper at Tuesday, May 26, 2009

The hotel that we stayed was also in Bencoolen street. We saw that "Manila Street" sign too. :) I'm a bit sad to see the church nearly empty. I wonder why.

Hi Jasper! Don't tell me you are still in Singapore? Did you have the chance to meet with Eunice of Travelerfolio?

ganda pala ng st joseph church doon. something that i want to see when i go to singapore.

the colorful staircase of the bugis village is cool!

the la salle arts building is really impressive. that's something that we dont have in the philippines yet. beautiful modern architectural structure.

ang ganda at ang linis pa rin ng singapore. hindi ko napuntahan yung simbahan na yan but your previous posts vividly reminded me of the place. hope to go back there again to do more shoots.